Advice on sci-fi project that plays on IF mechanics

Hello everyone! I’m currently working on a sci-fi project that could qualify as IF, though with some caveats. I’m posting about it here in the hopes of getting some feedback in that regard.

The project is called Omnipedia and its elevator pitch is “a sci-fi story told through a futuristic version of Wikipedia.” I see it as an epistolary sci-fi novel without the novel, a story expressed entirely through worldbuilding (which is my favourite narrative element and the one I feel I can most confidently tackle). What follows is the stuck-in-an-elevator pitch.

On Omnipedia (which will be a freely accessible website), readers have access to various hyperlinked articles that detail the important characters, organisations, technologies, and events that matter in the world of 2060 (and only those, I don’t need to have my futuristic take on the European goldfinch in there). The central sci-fi conceit is a mass surveillance network in the form of a globally federated identification and data mining system. Thanks to the ideas and advice of various experts I’ve consulted, I’ve been able to map out this world with an emphasis on scientific accuracy and plausible sociopolitics. I love hard sci-fi where the science dictates the drama instead of the other way around, and Omnipedia plays that approach to the hilt.

Through Omnipedia, I want to tell a story that touches on issues of (among others) artificial intelligence, big data, biased algorithms, privatisation, and platform capitalism. I’m tired of Elon Musk warning us of the dangers of AI because he has the luxury to imagine some far-flung scenario where we could all be wiped out by sentient coffee grinders. I’m more interested in exploring how AI and algorithms are affecting lives today, which the entertainment sector has only focused on in a more abstract and sensationalist sense.

Readers browse Omnipedia and experience a story told in it through episodic iterations, with cumulative article edits and news headlines listing a series of events that follow a narrative structure. I plan to guide the reader through the story using incremental versions or “episodes” of the site (through a custom page revision system resembling the one Wikipedia has).

The overarching idea is that readers form the progression of the story in their heads based only on the information Omnipedia provides. I will be feeding several different possible interpretations but never confirm one over the other at the end. That way, your story is yours alone. This makes me think of Omnipedia as a piece of IF, except with a choice mechanic less overt than a dialogue/action wheel. Games like Gone Home and Her Story employ similar storytelling strategies in that they don’t present a story outright but allow players to tell it to themselves based on in-universe clues.

Below you’ll find a few attached “screenshots” of Omnipedia in its current state (I chose the mobile version to not crowd this already too lengthy post). My webmaster has put together a Drupal website that mimics Wikipedia in broad strokes. The idea is that people are already very familiar with Wikipedia, so I won’t need to include a huge manual on how to navigate Omnipedia. In addition, using a custom site dressed up to look like Wikipedia as a medium means I can use its specific tropes as storytelling tools (like the aforementioned page revision system serving as scheduled episodic releases). Similarly, custom images, videos, graphs, maps, and boxouts will accompany each article.

I got in touch with Sam Barlow (creator of Her Story) to get his thoughts, and he mentioned that Andrew Plotkin was once working on a similar hyperlinked IF project. When I contacted him to make sure I wasn’t stepping on his toes, he told me his project never got past the sketch stage but wished me luck with mine. I like to think the IF crowd would be a fine audience for something like Omnipedia, but I’m not entirely sure. Any thoughts on that and the project itself would be massively appreciated! 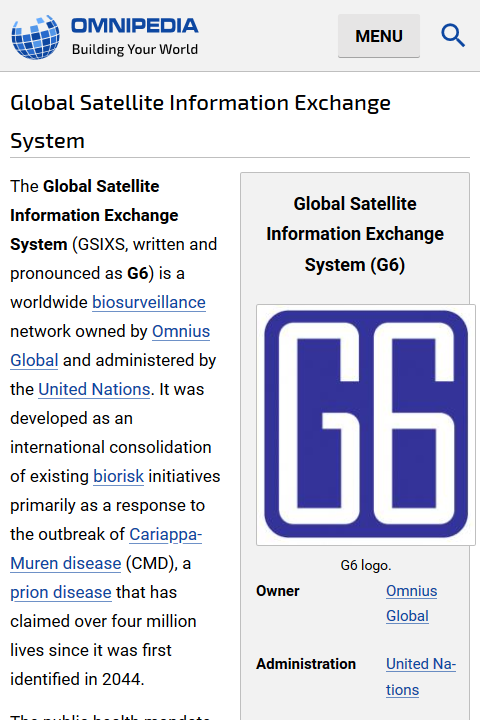 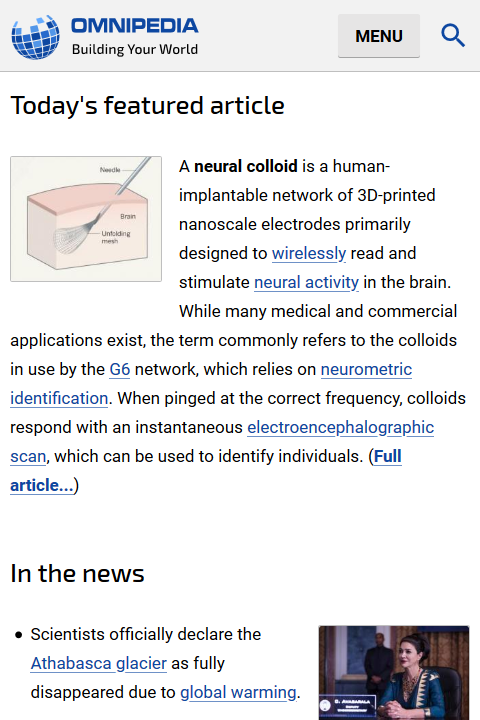 When I contacted him to make sure I wasn’t stepping on his toes, he told me his project never got past the sketch stage but wished me luck with mine.

Is it IF? Sure. It’s directly in the tradition of “database games” like Portal (1986, not 2007) and Analogue: A Hate Story. Exploration of the data space gives a sense of interaction even if there’s no puzzle or gating mechanics.

(Most of these games do have some kind of gating mechanic, but I don’t think it’s the core of the experience. Players spend the bulk of their time exploring and reading, not unlocking.)

When you talk about episodic iterations, are you talking about changes to the public web site, or some state linked to a player account that updates as the player progresses?

Oh hello! I do apologise if I overstepped my bounds in namedropping you and quoting our correspondence in my post

I’m glad to hear Omnipedia falls under the banner of the IF tradition you mention. Sam Barlow has likened such database games to the modern equivalent of epistolary novels in this tweet and I just felt right at home there.

When you talk about episodic iterations, are you talking about changes to the public web site, or some state linked to a player account that updates as the player progresses?

I have an early model I’m working out now. My webmaster has built a system that allows me to create multiple versions of each Omnipedia page linked to different dates that I specify. This is dressed up to look like a revision function that allows you to keep track of edits between dates, like the one Wikipedia has. So when you open up Omnipedia, everything is set to September 20th, 2060. The revision sidebar has links to a few earlier dates so you can go back for each page and see what edits have been made. These will be minor at first, more like a tutorial on how edits are tracked because that will become important later on.

That’s the base version of the site. Whenever I choose, I can then add links to September 21st for the entire site. This means a day has passed in the world of Omnipedia, like a snapshot of the last 24 hours. The In the News box is updated with a report of the story’s inciting incident, this is reflected in all relevant articles, and then the plot kicks off. I may have that entire plot (or potential plots, in this case) in my head, but I can use only Omnipedia to communicate only what would make the news, affording me room for lots of ambiguity.

As September 22nd and September 23rd and so on are added, more information comes to light, providing clues as to which articles provide other clues and/or could be seen in a new light. Being able to keep track of what is added and edited (and possibly deleted) between different dates is important, as it’s a lot of information to digest. The revision sidebar is there to help with that. Ultimately there’s a final date to signal the end state.

In the end, it’s a very curated experience. I simulate a few days of frantic editing to reflect an ongoing crisis that has captured the attention of the world. It’s up to you to read between the lines and figure out what really happened.

If there is room that I’m not seeing for tying story progression to specific player decisions rather than just me dropping episodes on a timetable, I am very open to suggestions

Cool! Don’t let anyone tell you it’s not IF. If you haven’t already, take a look at Phantom Williams’ 500 Apocalypses, which is a collection of varyingly-short stories in an encyclopedia-ish format.

You might also want to have a look at Unit 322 (disambiguation) which tells a relatively compact story through a simulated wiki.

Cool! Don’t let anyone tell you it’s not IF. If you haven’t already, take a look at Phantom Williams’ 500 Apocalypses, which is a collection of varyingly-short stories in an encyclopedia-ish format.

Thanks, I hadn’t heard of this yet! It’s also my intention to infuse Omnipedia with loads of self-contained short stories (kind of like optional sidequests) that don’t necessarily connect to the main thrust of the plot, but help colour the worldbuilding.

You might also want to have a look at Unit 322 (disambiguation) which tells a relatively compact story through a simulated wiki.

When I tell people about my idea to use Wikipedia as a story medium, a reaction that pops up a lot is “Why hasn’t anyone else thought of this before?” I did do some poking around when I first came up with it, and the closest equivalent I found (besides Portal) was the Codex Seraphinianus, though that sits in a category all of its own.

I will definitely look into Unit 322 to see how the Wikipedia-as-a-medium approach was tackled there!

This sounds very cool - almost like a “single player” ARG and brings to mind AlethiCorp from 2014 which was played on a fictional corporate network with email and knowledge bases. ifdb.tads.org/viewgame?id=ixlz4gj9cag89mtj

This sounds very cool - almost like a “single player” ARG and brings to mind AlethiCorp from 2014 which was played on a fictional corporate network with email and knowledge bases. ifdb.tads.org/viewgame?id=ixlz4gj9cag89mtj

A single player ARG may be one of the best elevator pitches I’ve yet heard to describe Omnipedia in a mechanical sense!

The best possible outcome would be the formation of a community around Omnipedia to contrast and debate the various interpretations of the available facts. That means I’m probably addressing people who are storytellers themselves, people who have the chops to fill in the blanks and attach empathy to the characters I describe. I like to think that the TV Tropes crowd would have a field day with something like Omnipedia (especially the Wild Mass Guessing section).

A post was split to a new topic: Temp introcomp game