What is the general consensus on Quest in the IF community?

Hello all, this is my first post here so I apologize if this is mis-categorized, general seemed to be the best place for now.

I am mostly new to creating interactive fiction, and after looking at various programs to start writing a game in I settled on Quest, since it seemed to have specific features that I would prefer to be in my games (such as a map that could be seen in-game without installing any extensions or messing with the software’s code). Just from looking around on the internet and at some some of the IFComp entries, Quest was definitely featured less. Heck, there’s only three topics under the Quest tag on this forum.

So I made this topic to ask why it’s not as popular in the IF community. I found a topic under the Quest tag that addresses certain things like the extreme bug-fest within the online version, and confusion that players might encounter with the combination of hyperlink and parser interaction. Complexity also seemed to be an issue, where skilled writers using Inform could accomplish more. However, some things mentioned such as scenery issues seemed to be caused by a lack of fleshing out the game on the author’s side (based on my own experience with what I can do in Quest).

In the end, is it a combination of the issues mentioned above with Quest that just make it an unpopular choice? Any input would be appreciated. While it has fulfilled my needs so far, I’m hoping to better understand if choosing Quest was the wrong choice.

One serious limitation with Quest is that it is only available for Windows.

My experience playing Quest games is that even the good ones tend to suffer from many more parser issues than equally polished Inform/TADS games. I remember being told that this is because the way you create verb/noun interactions in Quest is much more case-based, instead of by writing generally applicable rules. But this is mere hearsay; I haven’t actually delved into the system myself. However, based on past experience, when I start playing a Quest parser game I’ll be afraid of running into a lot of guess-the-command issues.

The website textadventures.co.uk is primarily Quest-based and has many more visitors weekly than this site, ifdb.org, and ifcomp.org put together.

Quest’s drawbacks are:
-slow performance when you play for a while due to extreme scrollback
-Less portability (a z-code game, for instance, can be played on almost any computer, on the web, or on a Gameboy even)
-It lacks the systematic approach of TADS, Inform, or Dialog, where you can create new systems and implement them thoroughly for everything. For instance, if you want to make a Star Trek game where you have a tricorder and can scan every item, you can, in Inform, say ‘Every thing has some text called the scanning result.’ and ‘Scanning is an action applying to one thing.’, etc. and suddenly the whole game is transformed. That sort of thing is harder to do in Quest.

And Victor’s right, Quest is focused on specific verb/noun interactions. If you have verbs and nouns in your game like:

then the usual thing that happens in Quest is the author will program a response for ‘TURN KNOB’ but not for ‘TURN KEY’, so if the player tries ‘TURN KEY’ they get no response and just assume that TURN will never work. Out of 16 possible interactions (matching each verb with each noun), only 3-4 might be implemented, which is 1/4 of all interactions, and that number goes way down for larger games.

In Inform, TADS, ZIL and Dialog, you can establish default behavior for a large group of objects so that all 16 interactions are taken care of automatically. For instance, in my Inform game I’m working on, there are a lot of ‘distant’ objects, so I made a type of object called ‘immaterial’, and I defined the behavior of over 50 verbs for these immaterial objects (like TAKE-ing or PUSHing or PULLing or TOUCHing). Since I have about 60 such objects, I just took care of 3000 interactions. You can’t really do that nicely in Quest.

There was a thread about this about a year and a half ago, with thoughts that echo what you’re hearing here.

Inform Lovers! What bugs you about Quest? Other Development Systems

I’ve been fiddling with Quest lately. The software is more minimalistic than Inform and it makes many functions quite easy. It’s fun, and I want to try building a game with it. However, I know quite a few Inform-diehards (in particular) who have a bit of beef with Quest. Not that the software is wholly bad, I understand, but that it gets buggy under certain conditions and also is complicated in some ways that Inform is not. Quest newbies seem to make mistakes that Inform newbies typically don’t…

My post here especially still stands. The Quest player for web is Not Good.

Inform Lovers! What bugs you about Quest? Other Development Systems

I’m on a Mac; it’s not just that I have to play in a browser. I like playing in a browser. But the browser version of Quest is Not Good. It does a network request for every move. Even on a wired network connection in the US, it takes a second or so to connect to http://textadventures.co.uk/ Every command has to connect to the UK and fetch the result, so every command takes a full second to run. It’s unbearably slow. But it’s actually worse than that. Try this: start a Quest game on wifi. Then…

Thank you for the long and detailed response. It seems like there are quite a few disadvantages that shouldn’t be there compared to other software for making IF. I will definitely check out some other options like Inform for making a game.

Quest is web-based and has their own community forum, so most Quest discussion happens over there. Same reason we don’t get a lot of specific CoG discussion.

Quest discussion can, of course, happen here too if people feel like it. Bitter Karella and Steph Cherrywell both have done cool games in Quest.

I love the features of Quest. I like that it has a dialogue and NPC system and is multimedia friendly, but as Brian specified I’m also spoiled by Inform 7’s ease of action customization and rules.

I would totally use Quest if it didn’t try to be parser and concentrated on the UI being an all-clickable Legend-style thing with the map and lists of nouns and verbs and their associated actions.

I made a parser game in Quest last year (actually seems like a lifetime ago now), the first thing I’d ever done, and I chose it because I thought I’d be able to do it without learning any coding (which wasn’t quite the case). Anyway, as mentioned above, the worst aspect for me was the web player. I prefer to play games online and in my experience it’s practically impossible to do that on the textadventures website. I didn’t appreciate the problem until I’d spent some weeks slaving away writing a game and then uploaded it and found it wouldn’t run from the website without unacceptably long pauses or freezing altogether, which horrified me a little. So it’s no good if you want people to play your game
online!

Otherwise, I found it quite easy to use, the NPC stuff is really good and I didn’t encounter any other problems. And the community was very friendly and helpful.

Wasn’t there a new version of Quest in development? Quest JS or something like that, which would run entirely in the browser? (If I recall correctly, one reason the web player is slow is because it runs the game on the server.)

I believe I heard on the Quest forum that QuestJS was given the boot and they’re focusing primarily on Quest 6, which will supposedly be entirely JavaScript.

Sounds like more or less the same thing (QuestJS /Quest 6 JavaScript) . If the next version of Quest is browser-based then I’d be interested in using it again. Part of the reason Adventuron appeals is that both the editor and compiled games run entirely in the browser.

There is this on the Quest forum that gives an idea about the current Quest 5 and the hoped for timeframes for quest 6. Quest 6 is usable right now but the GUI editor is still being developed.

There is indeed a new version of Quest in development.

Some years ago Alex started developing QuestKit, the next version of Quest, and Quest-JS, for running Quest 5 games in JavaScript, but both are now abandoned. Since he left Quest, I have taken over development in a new direction. Quest 6 aka QuestJS, which is entirely in JavaScript so just runs in the browser. There is no editor, but it is all there and working. 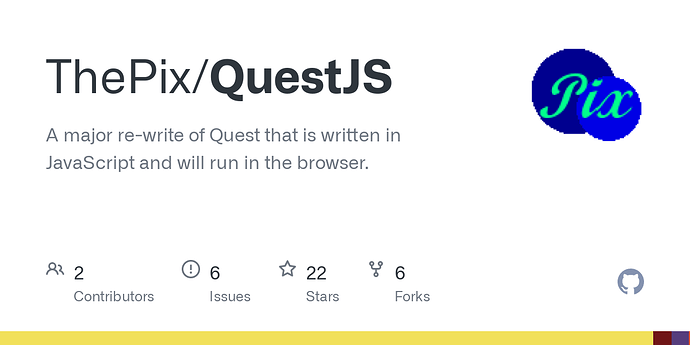 A major re-write of Quest that is written in JavaScript and will run in the browser.