Inform Lovers! What bugs you about Quest?

I’ve been fiddling with Quest lately. The software is more minimalistic than Inform and it makes many functions quite easy. It’s fun, and I want to try building a game with it.

However, I know quite a few Inform-diehards (in particular) who have a bit of beef with Quest. Not that the software is wholly bad, I understand, but that it gets buggy under certain conditions and also is complicated in some ways that Inform is not. Quest newbies seem to make mistakes that Inform newbies typically don’t.

What bugs you most about Quest games? Where are your hangups? Which malfunctions have caught you most?

Name anything, really, except for that the interpreter requires users to download to PC or else only use it online for Mac. This is an issue that Quest authors likely won’t circumnavigate for quite a while. IMHO, a good game is a good game, no matter how funky the interpreter is. (ex. Leadlight/Cryptozookeeper/etc.)

I’m asking so I can better be aware of where Quest’s slip-ups and imperfections are most likely to occur. As for myself, I’ve found that many Quest games implement few verbs and can cut across weak in that way. (I can see why this is - although Quest makes many tasks simple, it also makes creating new verbs/actions weirdly difficult.)

2 Likes
What is the general consensus on Quest in the IF community?
VictorGijsbers December 2, 2019, 6:25pm #2

The one thing I’ve noticed with quest games are parser problems. I’m not sure whether it was due to the system or the authors, but I often ran into serious trouble. One weird thing that I think I have noticed several times is that in the context of one command word A would be counted as a synonym of word B… and then in the context of another command it would not. For instance, “examine dog” and “examine Labrador” would both work, but then you absolutely had to write “give bone to Labrador” and couldn’t use the word dog. (Not a real example.) I might be able to find some real examples in my notes, if so I’ll send them through PM.

I agree with Victor.

My biggest reason I prefer Inform over Quest is that Inform lets you write general rules, so that all interactions with a given object have the same response, for example.

A better example is giving objects an attribute and basing verbs on that attribute. For instance, you can define things as ‘flammable’ or ‘not flammable’, and you can make ‘BURN [something]’ say ‘You can’t do that’ for non-flammable things and ‘[The item] disappears’ for flammable things, and having it actually disappear from the game.

If this is already possible in Quest, I don’t see many people doing it.

Similarly, like Victor said, scenery just don’t seem to work well, since I think objects that you can refer to always appear in the object list?

For instance, Bitter Karella is the best Quest author out there right now. Look at this interaction: 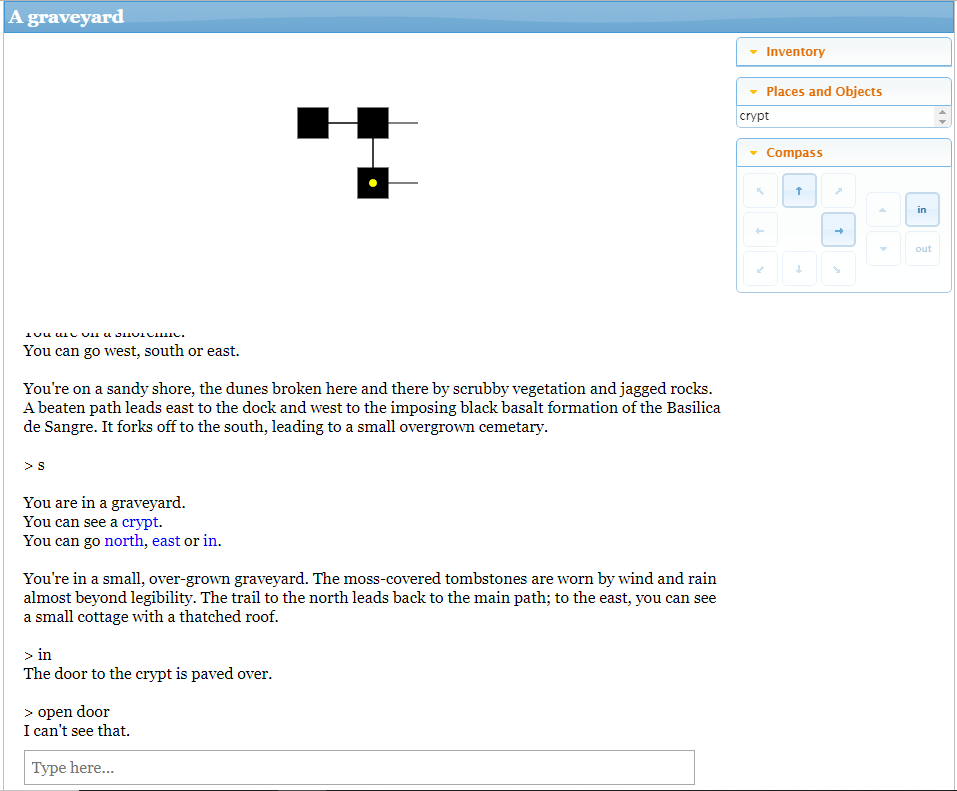 The text indicates there is a door, but I can’t look at it or interact with it. ‘Door’ isn’t really a synonym for Crypt, so it should be scenery or a part of Crypt (can you do ‘part of’ in Quest?), but the author can’t just implement it as a door, since it’s not a real door, it’s covered over.

In Inform you would just say

And that’s all you would have to do.

I wrote a short review of Quest authoring system a month ago and posted it in the (private) competition author’s forum where it was not widely seen. I’ll repost it here.

I like the idea of games that allow either text entry or point and click entry. I like having a graphical map on screen. Quest is the only authoring system (I know) which offers those features as a default. I believe that inform has some extensions for graphical mapping and clickable links, but they are not commonly used. I have never seen a Twine game with even a two word parser, though I imagine if you knew enough javascript you could make it work. Quest is a system that seems to provide the best of both worlds, right out of the box.

I’ve had a little experience with programming in Quest (though never published anything with it) and I like it from that perspective also. It is much easier to program in than Inform, and allows the programmer to toggle easily between code view and GUI view. If you forget the name of a function, you can always find it from a drop down menu.

All that said, the system definitely has some weaknesses. As a parser system, it is no where near as robust as a well written Inform game (yet better than a poorly written Inform game). As a point and click system, authors often make the deliberate choice to render certain puzzle solutions inaccessable to the point and click interface. A puzzle solution might be text-only, defeating the player who become too dependent on the links!

As an authoring system, I found it started to become unwieldy as my project grew larger and I had trouble keeping all the different object trees well organized. In addition, there were things I wanted to do programatically that just weren’t possible. (things as simple moving the player object to a new location that is non-contiguous with the rest of the visible map). Lastly, it bothers me that the system for playing Quest games online is just so buggy. (especially for those who choose to play anonymously.)

I hope to see more authors take up the Quest system and maybe address some of these shortcomings. I think it has some real potential.

Name anything, really, except for that the interpreter requires users to download to PC or else only use it online for Mac. This is an issue that Quest authors likely won’t circumnavigate for quite a while. IMHO, a good game is a good game, no matter how funky the interpreter is.

I’m on a Mac; it’s not just that I have to play in a browser. I like playing in a browser. But the browser version of Quest is Not Good.

It does a network request for every move. Even on a wired network connection in the US, it takes a second or so to connect to http://textadventures.co.uk/ Every command has to connect to the UK and fetch the result, so every command takes a full second to run. It’s unbearably slow.

As a result, Quest games are basically unplayable on mobile. Even if you’re willing to endure the slow commands, at some point, your network connection will drop, and you’ll lose all of your progress.

Compare this with Inform games running on Parchment on iplayif.com. They take a few seconds to load, but once they load, they’re fully in memory in your browser. Hit enter and you get a response instantly. The performance and UI experience is just as good as the play experience in a top-shelf interpreter, Lectrote, because Lectrote and Parchment share the same underlying JavaScript code.

Thanks for going against my request and letting me know this. I use a PC and wasn’t aware just how buggy Quest was on Mac!

Thanks all for the replies. (I took notes!) Personally I still prefer Inform to Quest myself, but as @Doug_Egan mentioned, I think the software does have some unique promise which I’m curious to explore!

I wish Quest worked better (especially the release tools - mac/pc) because I love some of the features.

I will say that I also like Squffy which is also accessible from the site and I’m surprised more people don’t use it for simple choice-narratives. It does some cool things as well.

At some point I thought I had seen a prospective beta that was platform agnostic (ran completely in-browser) and allowed some neat UI arrangement. I don’t know how official that was though.

Thanks for the link @HanonO, I’ll definitely check out Squiffy. That’s what I like about this site – so many people know such out-of-the-way things, I never know what I’m going to find next.