What A Great Text-Based Game's Opening Does (educational gamedev comic)

Been a while since I posted here.

Recently, a fella on Twitter wanted to know what makes a good opening in a VN/IF project. I replied with a brief explanation, but after that, I decided to take some time to give examples. So I then dissected various 1st scenes & 1st lines of 8 different games. Finally, to conclude, I brought it all together with a comic explaining more. My brain’s hyperfocus dial went on overdrive and I did a lot of stuff lol.

Figured I’d share the things I made in case they can be helpful to others too! First, here is the comic about a good text-based game’s opening

(if at any point the text is too small, feel free to open the image in a new tab to zoom in!): 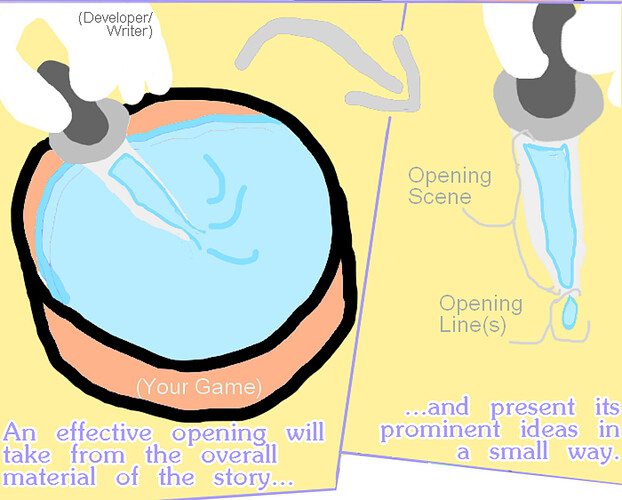 (My sib Eliana told me I should make this into a slideshow or lecture [which is very flattering, thanks E]; lmk if that sounds like something you’d like to see sometime!) 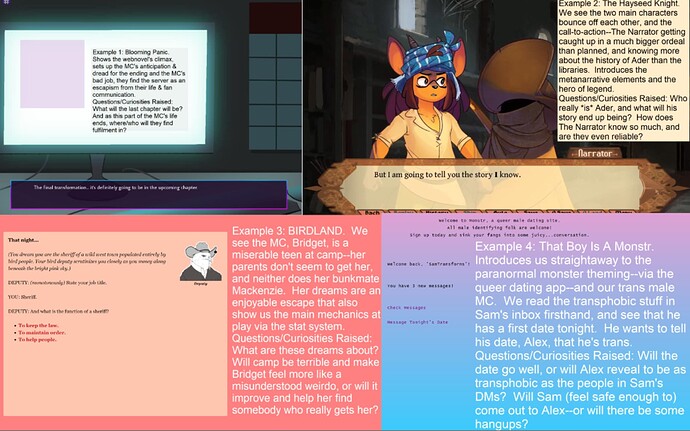 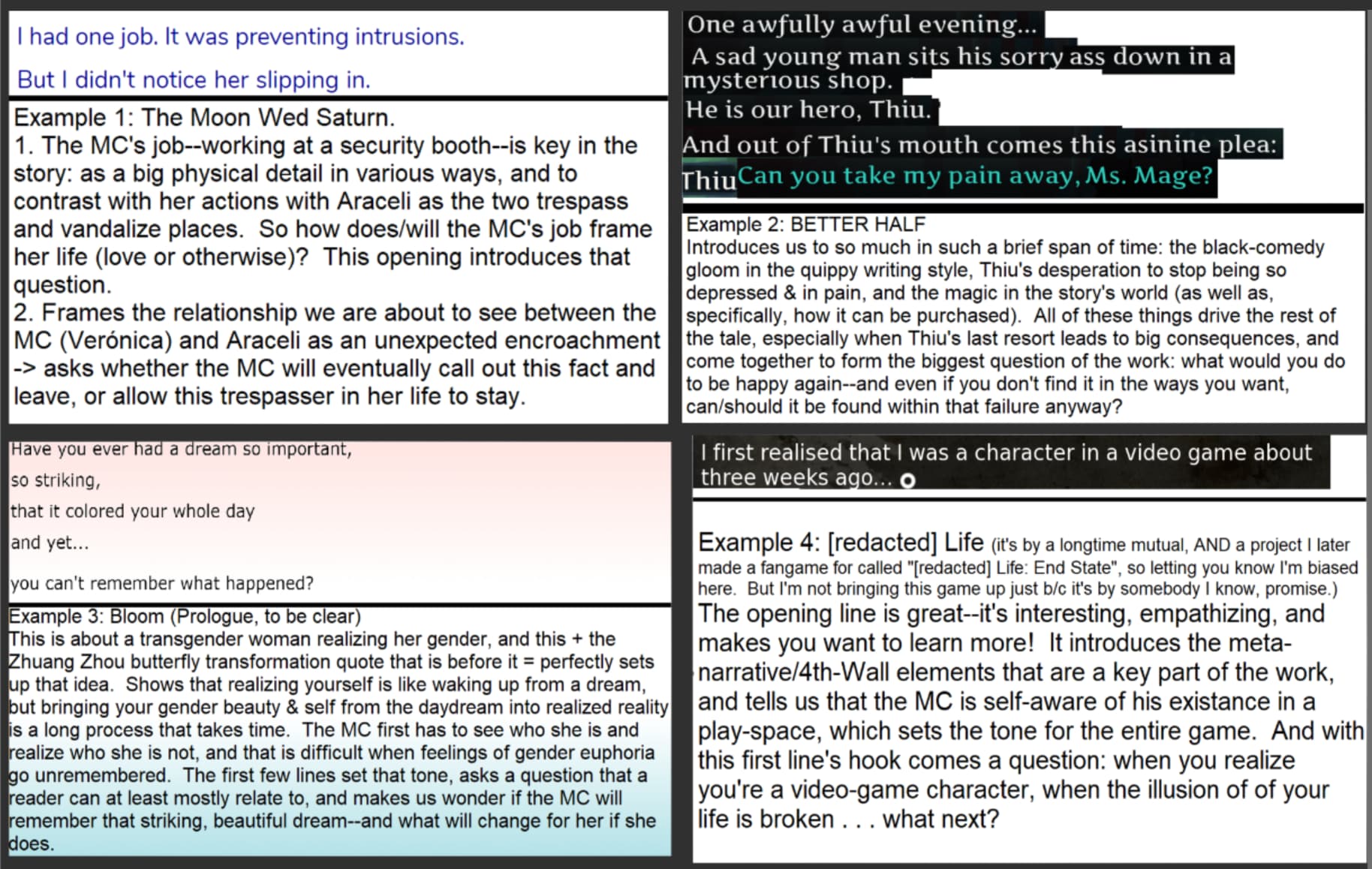 Hope this is helpful to some of y’all! The original reply thread with this stuff is here.

I’m super to hear what others think of this!

HOWEVER, I’m still Sick And Suffering immensely so idk how active I’ll be in responding?

I can barely reply to brief emails atm b/c my brain’s cognitive functions are literally disintegrating before my eyes! In a few hours, I may entirely forget I posted this (I wish that was a joke but unfortunately it’s not)! I will try my best to keep an eye on the discussion, but I can’t promise anything, sorry.

Alright fellas, that’s all I have for you today. Thanks for reading!

(What do YOU think makes a good opening for a text-based game. Let’s share thoughts together!)

In terms of mechanics: personally, I like to put some constraints on the player initially before opening up the game more widely.

This is not strictly necessary though, and some people have said that they could use a more thorough tutorial section in my games…so maybe I am not restraining players in quite the right way.

Bez is right - the opening needs to set up what sort of game to expect. It means players who won’t like your game leave before they get upset or disappointed, and those who should be playing your game rather than somebody else’s can build up anticipation for what’s next.

Interactive fiction may have fewer control-based issues than most other genres, but it’s wise to pay attention to these. I changed my opening to include explicit advice for how to select a choice after one of my play-testers couldn’t get past the first screen of my original all-story opening. Don’t introduce them all (or at least make sure there’s an option for getting all possible controls rather than throwing 50 possible commands on the first screen) but do make sure there’s enough so people can at least make a start.

This is fantastic. I just spent a few minutes with my Spring Thing entry looking at your comic and thinking about what I had done right and wrong in my opening. It’s always really helpful to have a rubric to check your work against.

Another thing I think is critical in openings: Do NOT have typos or grammatical problems in your opening. Some will probably always slip through elsewhere, but not in the opening. That needs to be perfect. Once players are invested, they will probably forgive an awkward sentence or a small typo, but not at the outset. I have several good writers comb through my opening text to make absolutely sure it’s spotless.

Do NOT have typos or grammatical problems in your opening. Some will probably always slip through elsewhere, but not in the opening. That needs to be perfect.

This is true. I was on a site that provided feedback for prospective screenplays and a typo/misspelling on the first page was grounds for an immediate “pass” no matter how good the premise was.

11 posts were split to a new topic: Public Moderation of Topic [Split on Request]

It’s really good to see a comic and topic like this. I certainly struggle with having a good opening. That devil’s advocate says “What does the opening matter if the main story’s lame?” or “Don’t over-promise” or whatever.

I do want to make sure that people who might not enjoy it feel OK passing on it without apologizing prematurely e.g. a chess-based text adventure game. I’m not going to apologize for writing it, but I recognize it’s not some people’s taste, and I don’t want or need to empathize this.

I think one other big problem I had was saying “Well, I don’t want my intro/blurb to feel like an ad or commercial.” Yet at the same time, we do need to advertise our strengths, and our story’s strengths, and there are ways to do so ethically and in a way that won’t leave readers feeling forced or jarred.

So the original comic and the overall discussion were quite helpful–in fact, I was putting off my introduction for my Spring Thing game until now, and I got some good hacks in at a first draft. I suspect I’ll have to fine-tune them, but the start is important, and I should probably re-read this in a week so I have another take.

I think one other big problem I had was saying “Well, I don’t want my intro/blurb to feel like an ad or commercial.” Yet at the same time, we do need to advertise our strengths, and our story’s strengths, and there are ways to do so ethically and in a way that won’t leave readers feeling forced or jarred.

This is a great point. I had a review of WHHoGG that said my blurb oversold the game, and I really took note of that, because ick. I really do not want to be that guy. So it’s important to weigh what you promise with what you deliver. Blurbs and intros ARE ads, and despite my distaste for having to sell myself (I suspect myself sometimes of a princess-y tendency to think I shouldn’t have to do that), we do need to hustle to get attention. But we also need to do so honestly.

So… Thoughts on media openings as opposed to text openings on games that are otherwise primarily text based? i.e. starting with a short video, or comic strip, or some images and music? Even a voice over with montage slide to set the tone? Invoking the spirit of this part of Fallout 2’s intro sequence here.

Does the fact that the game is text mean we should stick with strict text openers?

I am all for it, as long as it isn’t accidentally misleading the player into thinking that’s what the game will be like. Sometimes I like to spice things up a little by choosing an IF game that’s augmented with art or some such, and it’s disappointing if that doesn’t carry through into the game itself. I like to put my cover art at the beginning of the game, and I hope that doesn’t mislead people into thinking that the game will be illustrated.

Does the fact that the game is text mean we should stick with strict text openers?

I hope not. I love to see creative use of other media that enhances an IF experience.

Someone should do that for Ludum Dare one year as a gag, lol. You could even put out a teaser the day before games are released, lol.

It could be a great device, sort of like black-and-white to color in the Wizard of Oz. It could be a really effective way to tell two different parts of a story. In fact, I’m sure I’ve seen this done, but I can’t remember what game.

The “hero” of the Pixar-quality 3D-so-sharp-the-nosehairs-are-showing animated intro could sit down in a comfy chair with a book at the end of the sequence.

Slow zoom in to book-cover as the “hero” opens it…

And fade to text-adventure where You are the protagonist of the book.

I have to admit, the idea tickles my absurdist tendencies.

Just a random thought; if vorple allows javascript, does that mean you can go beyond gifs and music and imbed actual video, even standalone javascript games?

Might allow some interesting collaboration possibilities with communities we rarely directly interact with.

Edited to add: I mean, I’m not immediately sure what inserting flappy bird halfway through your game would accomplish, but the fact that it seems possible smells of opportunity to me.

OK, I just remembered what game I’m thinking of. It’s IF, but augmented throughout with other media, and it’s pretty great:
Device 6

I swear there’s one that flicks back and forth from pure text to animation, but its name is still eluding me.

Just a random thought; if vorple allows javascript, does that mean you can go beyond gifs and music and imbed actual video, even standalone javascript games?

Yes, with Vorple you can output arbitrary HTML and thus include videos or other JS games. It will take some integration work. You could also imagine the external game influencing the story but that’s a lot more work.
If anyone wants to try this, I’m happy to help (I’m a JS dev and love to mix Inform & JS).

It doesn’t use Vorple but I’m using a similar technique to execute JavaScript.

The text adventure segment of Frog Fractions comes to mind, but that was made palatable by the other twists before it…

I’d love to hear what games people feel have the best openings (even if the rest of the game doesn’t live up to that). What games did a stellar job of sucking you in, and why?

Right off the bat, I’ll propose something I played recently at @DeusIrae 's prodding: Will Not Let Me Go, by Stephen Granade. From the first few seconds, I was hooked, because you instantly realize how awful and sad the situation is.

If anyone wants to try this, I’m happy to help (I’m a JS dev and love to mix Inform & JS).

That’s very generous of you. I would have responded sooner, but I was still recovering from being successfully rickrolled in 2022. My hat’s off to you.