This feels like a topic that probably already exists, but I couldn’t find it…

I’m a choice based author (Twine and Ink mainly) who’s never written any parser games but I’m thinking about trying one out for a little piece for Seedcomp!, but I don’t really know anything about the advantages and disadvantages of the different systems. I know why, for a given project, I’d choose Ink over Twine (or the other way around) but I have no idea on why I would choose Inform over TADS, say.

I’m not a wonderful coder but I don’t need something super simple (although it would be nice to know what is simple anyway and the trade-offs it has). The Seedcomp! game would be very small so probably anything could handle it, but I’d like to start learning something for a potential other project in which I’d like to include an in game timer (not a move counter, an actual real-time time-limit). Apart from that I’m just curious.

And sorry again if this thread already exists somewhere!

Oh, actually I’m an idiot, the Seedcomp! game needs to have an image in it, ideally one that is always visible to the player. That’s like, the whole point…

That doesn’t necessarily stop you from doing it as a parser game, though!

Oh no not at all, but the system would have to support images. I presume they pretty much all do, but I thought it was worth mentioning.

If you wanted something quick and easy to learn with images then you could use Adventuron. (I don’t think that one currently supports a real-time timer, if that’s what you mean, for your other game.)

That is what I mean, yeah.

the system would have to support images

Inform does. A big plus about Inform is that the help you get here is really quick and thorough. I’ve never used any other program, but if I can pick up the basics, anyone can.

Inform 7 has a low skill floor and a high skill ceiling. It’s fairly easy to jump in and set up some rooms and objects with default actions.

However, it doesn’t necessarily look like a traditional programming language, which puts some experienced programmers off.

It is likewise not challenging to put an image in an Inform game. Unfortunately, it is less easy to make the image look good across multiple interpreters and resolutions. Still, they look “fine.” There’s been talk of improving that situation.

I say these things are easy because I can do them, and I am hardly a skilled programmer. Not at all.

Dialog is a little harder to get started with, but creates the same file types as inform and was designed with web m-friendliness in mind, including images.

If you have any coding background, TADS would probably be easier and allow you to do some really technical stuff pretty efficiently, if you need to.

If your coding skills aren’t that high, then you might find Inform 7 to be a lot more fluid instead. It’s technically still “coding”, but it uses natural language. Coders find this more difficult work with, but it’s amazing for authors. You can do same level of technical stuff as you can in TADS, but it tends to look like a legal document, which may or may not be overwhelming.

I’ve used both for a few years each, and they’re both about equal, honestly. It’s literally just a case of how much you lean on C-based coding skills.

There are a few other parser platforms, I’m sure, but I don’t know anything about those, lol.

I mostly use TADS because trying to work in natural English is very clumsy for me, as I don’t process my thoughts using language. Also, I have a large coding background, so TADS was more natural.

I will throw in QuestQS, if you are happy to do some coding. 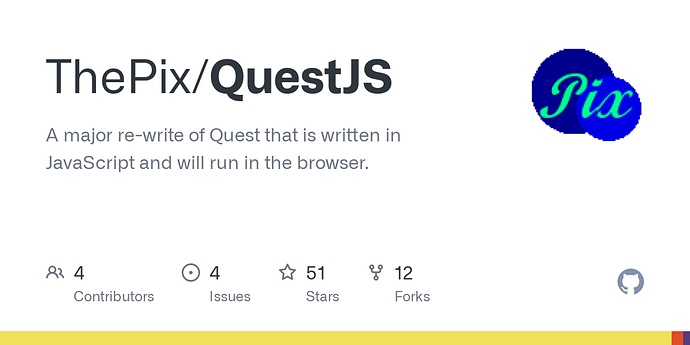 A major re-write of Quest that is written in JavaScript and will run in the browser. - Home · ThePix/QuestJS Wiki

It is all in JavaScript, which you might have encountered already in Twine, but keeps it pretty simple.

You could easily have an image there constantly as a background image via CSS. You could do it other ways too.

Some coders find Inform 7 easier to work with!

Sorry; as a coder, I have to keep saying this.

Inform 7 has a low skill floor and a high skill ceiling. It’s fairly easy to jump in and set up some rooms and objects with default actions.

Agree on this. Inform can do lots of things and like 75% of it is very easy to do. What tends to be daunting is the mammoth size of the documentation. You don’t have to read it cover-to-cover - you can probably implement rooms and objects and containers after a few chapters, but finding the weird specific odd advanced stuff without having at least skimmed the manual can be difficult. Image inclusion is at the very back of the manual.

I found it easiest to remember odd phrasings in the examples as search terms. I kept returning to the section on assertion verbs for relations since we used to have to specify all of them: “he sports”, “they sport”, “he sported”, “it is sported”, “he is sporting”, “he had sported”. I could never remember the format, so I always knew if I searched for “sports a tory rosette” (which is the example in the documentation) I’d link right to it.

The other one is “kinds of action” which I always locate with the phrase “unmaidenly behaviour” with the u.

My suggestion if you want to use Inform 7 seriously (should we be calling it Inform 10 now?) is find a time to sit down and read the documentation inside the IDE; you don’t have to read every chapter in its entirety, but just skim it and see if it has any concepts that you find interesting that might apply to what you want to do, and click the links to compile the examples to experiment. You’ll get to stuff where you’ll go “I will never use this!” but it helps to just know what all is in there. Then if you suddenly go I WANT TO USE A TABLE you’ll have an idea where to go and read in detail.

The Recipe Book is shorter and actually even more useful since it’s more demonstrative and packed with common and esoteric code implementation examples.

I have to echo Inform 7–as someone who also jumped from Twine to parser I was able to pick it up and start doing even complex things fairly quickly.

On the subject of I7 documentation, and I imagine this is true for other platforms as well:

So much good stuff here.

You’ll probably notice - a couple days ago I dug through settings and moved the bookmark icon out as the first one because people weren’t discovering it. Bookmarks are great, ya’ll. People were always “how can I keep this thread pinned so I don’t lose it?” Bookmark it.

I did. Great idea!

Some coders find Inform 7 easier to work with!

Sorry; as a coder, I have to keep saying this.

As you should! My apologies for overlooking this possibility!

Oh, good. I kept staring at the icons, thinking “were they always in that order?” Glad to hear I wasn’t going insane.

I was wondering about that!