What's the most active thread over different periods of time?

Hail to you, oh great and terrible admins, you know what, that’s silly, we’re not doing this, I’m not writing this whole post in fake ancient prayer, I’m sorry I don’t know what came over me. Let me start again.

So! I was frequenting @sophia’s What's one positive/neutral thing that's happened today? thread, posting along on New Year’s Eve, as one does, and I was struck by the length of the thread. It’s seen 313 posts at the time of writing and seeing as it’s started on November 3rd, it’s been chugging along for, what, slightly greater than five posts a day? I may not be a grizzled veteran of forum wars past, but as far as I’ve seen it’s easily the most active thread alive. So, I was just wondering if there was an easy way to find the most active historical threads that doesn’t involve writing a web crawler of some sort. Is there a stats page somewhere? Or is that kind of thing something you’d have to have admin or backend access to sus out?

I guess on a related note, thank you @sophia for making the offtopic chat threads that you do, it really does liven up the place. I visit these forums, uh, intermittently at best, but it is nice to see people using them for things other than technical questions and reviews, so I just wanted to say thanks!

I was actually just thinking a similar thought about @sophia’s thread, funnily enough!

There is a “Top” option when you go to the forum homepage – in between “Latest” and “Bookmarks” – that gives you the top threads by day/week/month/quarter/year/all time; you can also filter it by category or tag. So that would mostly be what you’re interested in I think, except the algorithm seems kinda mysterious to me and gives some weird results (for example, currently in the monthly top threads list, the teaching Inform thread is second and the IF People’s Choice Awards thread is fifth, despite the latter having more posts and views and a higher like/post ratio).

Anyway, I think browsing the first couple pages provides a good sense of the “best” threads, so it basically serves its purpose, but I wouldn’t think too hard about the exact placements.

Maybe it’s some sort of secret sauce that includes likes? I didn’t expect what I got when I set it to year. It’s fun to reminisce about 2022 threads anyway.

Aww, of course! I always have a lot of fun with those threads and it’s lovely sharing with and hearing from other people on here. I’m glad you guys like them too!

The “Introducing Ourselves” thread has been going and is still active since 2006.

On the Adrift forum, we have a little topic stickied at the top of the General Discussion section where people can come along and introduce themselves to the forum. Any chance of something similar here so that everyone can get to know everyone else? (Edited by Rioshin: Post stickied) Assuming it’s okay… I’m David Whyld, 30 and a bit years old, way too much free time on my hands and an obsessive drifter (that’s in the sense that I use Adrift, btw

). I’ve alternatively wanted to b…

Wow, 2006… I would have been six years old when that was first started. That’s crazy.

I would have been six years old when that was first started.

I’ve done dives on the forums before (mostly to read postmortems and reviews) but it hadn’t really struck me until now how long this place has been around. It’s a wild concept. Definitely cool it’s still around though!

I was going to say, you know this is New Years Eve, not Halloween, right? This isn’t a night to say terrifying things!

The passage of time is soooooo weird. Best not to contemplate it for too long!

Same here! Jeez, really puts the age of this site into perspective, I’ve barely scratched the IF games surface, this year im diving straight in! Gotta play a lot and learn a lot! Here’s to an IF filled year lol

stop it… you lil bean 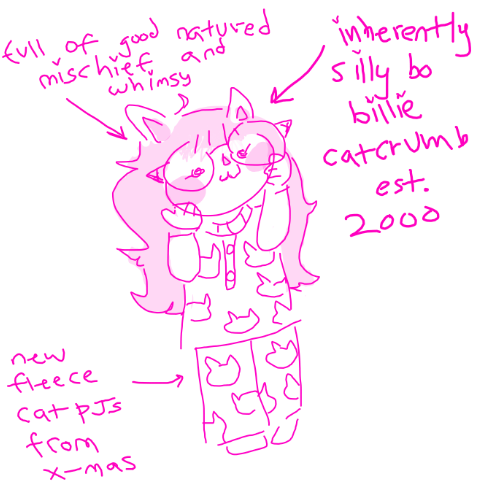 I’m reminded of the infamous Smacking Thread over on the ADRIFT forum, in which forum members smacked each other for months and months like a never-ending Three Stooges sketch. It was all in good fun but the mods did close it eventually. It’s probably still the longest thread on the ADRIFT forum, running to 1,831 posts.

If anyone hasn’t replied to this poll yet, feel free:

Poll: When did you play IF for the first time?

To me, this forum will always be the newfangled replacement for the Usenet newsgroups.*

* I personally think it’s much better than those were!

2006 is very impressive! When did the forum start?

Anyways, Introducing Ourselves has 1179 posts, which gives it ~.2 posts/day, making an extremely venerable but relaxed thread. Looking at Top => All Time, a promising candidate seems to be the Inform 7 open-source thread, which has 287 posts from April 28 to Sep 6, giving it, (using ~5 months as the time estimation) ~2 posts/day.

This thread, IFC entries get drawn, starts on the 1st of October and ends on the 31st with 129 posts, doing the best out of the above at ~4.2 posts/day!

For example, my Top → All Time tab looks like this when I search for the positive/neutral thing thread: 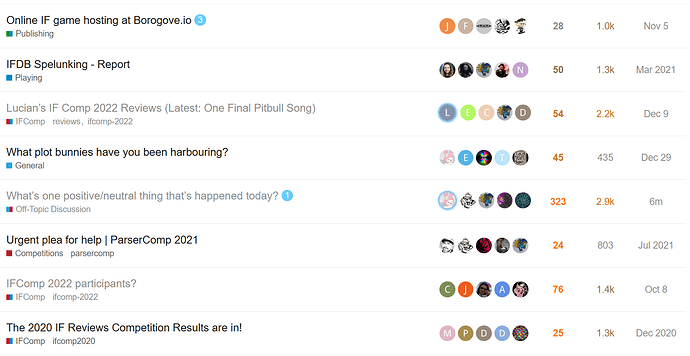 which doesn’t really seem to clearly be doing views or replies.

2006 is very impressive! When did the forum start?

Per Interactive Fiction FAQ - the community started to coalesce on Newsgroups. I remember having newsgroup software before everything became web pages.

Unless I’m missing some history, the intfiction forums were initially on phpBB software as early as 2006 when the “Introducing Ourselves” thread started.

We switched over in 2019 to Discourse after discussion that seems to have begun in 2016. One requirement for the change was Discourse had to import all the data from phpBB so we wouldn’t lose it and that’s why we have the “introducing ourselves” thread that has lasted so long. It didn’t actually begin here!

Here’s the earliest Wayback snapshot I can find.

For example, my Top → All Time tab looks like this when I search for the positive/neutral thing thread:

I believe “Top” figures in post likes from Discourse which either wasn’t a phpBB feature, or it was and the stats didn’t translate in the migration.