Sometimes compliments from others are not always taken as they are intended. When my daughter was in her mid teens, her grandmother called her statuesque. She ran to her room crying. My daughter is quite tall and very pretty. At the time, she was very sensitive about her height and thought statuesque was a pejorative term.

Having your hair compared to Pocahontas was surely meant to be a nice compliment.

Been enjoying drafting by hand again. Pen and paper always manages to help me claw my way out of writer’s block, and it feels good to put stationery to use. I have to refill my fountain pen later- I’ve run it down to about a little less than a quarter full. Also kind of cool to be able to visualize how many supplies have gone into a project. Maybe I’ll even finish off my bottle of ink in a reasonable amount of time!

When I studied engineering drawing in 1970, all we had were hand sharpened pencils and drafting set ink pens.

I miss my K&E set and even later a Leroy set. I do still have several slide rules. I used to actually carry one on my belt… and a pocket protector…

Kite sent me a kitty picture- she occasionally does this when she finds ones she thinks I might like or not already have in my collection. I also managed to identify and pull up one she requested, which was fun! (Also, if I don’t show the pictures I’m talking about, generally it’s because I feel it’s rude of me to share pictures of my friends pets and their immediate personal surroundings in frame if I haven’t been given explicit permission to share. Know that all the little meowmeows owned in the group are quite cute.) 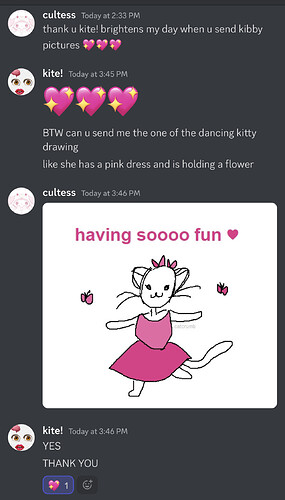 Jinx put up a personal site, and I thought it was adorable how she put a quote from Brian, Manon and Rovarsson on a page. I was like, hey, I know them! Always fun to find references to people from the forums in the wild.

Honestly, it puts mine to shame. It has such a cool and well executed vibe!
Really didn’t expect my name to be on there either

I’ve recoded my intro, and now I like the whole vibe much better!

After a terrible night of sleep (and like 4 months since I got this feedback), I finally found the solution for the intro issue of my IF Comp entry last year. Like when I woke up. It seemed so evident. I can keep what I really wanted and fix a couple of other feedback I got with that new idea (especially the pacing issue

Really excited to get back to it

Mad’s been busy with work, but reached out this morning to say meowdy! I convinced him to take a peek at the forums sometime soon, so perhaps we’ll see a post from Mad on the introductions thread. He’s been trying to share a kitty video of his pet cat chewing the hell out of his bracelets in an attempt to be annoying about the fact he’s awake and not petting said kitty, which has been pretty funny. Technology continues to outfox us all.

Also, Mad is one of the few people I actually text (though we do also keep in touch over Discord as most young people do these days) and while absently clearing the pins to save the introductions thread for him to check out later, I found this exchange between us hahaha. 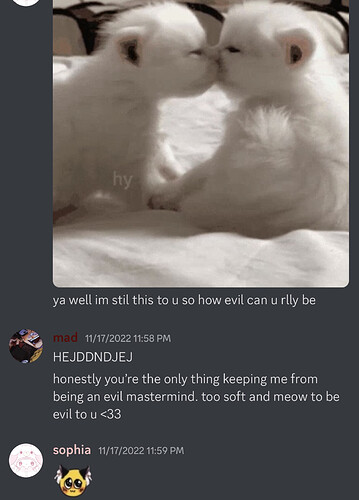 I was chilly last night working at home in the corner bedroom that tends to be the coldest, so I pulled a long-sleeve shirt out of the closet. I hadn’t worn it since last winter - I usually only wear it over another shirt and then hang it back up again because it doesn’t get dirty enough to require frequent laundering.

As I was sitting there I caught a whiff of cigarette smoke. The fact that I could even perceive that a garment had been around cigarette smoke was surprising. It wouldn’t even have registered before.

As I was sitting there I caught a whiff of cigarette smoke. The fact that I could even perceive that a garment had been around cigarette smoke was surprising. It wouldn’t even have registered before.

Did you quit smoking? And you have stayed quit?

Did you quit smoking? And you have stayed quit?

I transitioned to vaping through October and didn’t purchase cigarettes again probably mid-November. I “quit” formally this year and now that I don’t have a tobacco surcharge on my health insurance it was like getting a raise!

I actually got the vapes to make it easier to get through my work-at-home job because cigarettes were a nuisance, and luckily almost immediately realized I didn’t enjoy smoking as much, nor the mess it creates.

I didn’t intend to quit so fast but the immediate benefit made it easier. I’m still on nicotine with the vaping, but I will cut that down eventually too. Right now I’m having too much fun with different flavors.

I “quit” formally this year

Congrats! I’m sure you know this, but quitting is the easy part. It’s staying quit that’s hard. Stay strong!

Congrats! I’m sure you know this, but quitting is the easy part. It’s staying quit that’s hard. Stay strong!

I’ve tried several times and realized the addiction is two-pronged - first the physical addiction that makes you impossible to get along with and can cause headaches. Second, the habitual: I realized I was so used to writing with a cigarette it felt weird. I almost quit once years ago by using a patch for the first part and chewing on a pen-cap for the second.

And to be fair, I’m still on nicotine with the vapes, but it makes it easier to go longer without it since I can puff once or twice and put it down without feeling like I need to finish an entire cigarette.

Just the amount of desk trash emptying ashtrays and ashes everywhere and - I honestly was an outside-only smoker until mom moved in and refused to quit and wouldn’t/couldn’t smoke outside so there seemed no point in maintaining that. The impulse to change something happened when she passed and everything was in upheaval anyway.

ooooh lucky me, another positive thing: my replacement laptop just arrived! I can write again wherever I want

I forgot that I have a bunch of hard caramel candies! I packed a couple into my backpack to surprise and delight future me, but I’m having one right now as a treat with the dreary weather in the background. I had some trouble tinkering around in Twine last night, so hopefully today goes a little smoother.

Hard caramel candy should always be carefully and deliberately stashed in easy-to-forget-about places. Forgottencandyfoundagain is the most delicious candy there is.

to surprise and delight future me,

I love when past us do things like this. Like it seems like such a dumb small thing, but it always feels so nice to find those things!