I hear you. I’ll see if I can get Norton to spew out a bit more info. Note, however, that the above file issue (first screenshot) happens on a system even without Norton.

I can’t reproduce the file issue here. When you say it “happens on a system even without Norton”, do you mean one without Norton installed, or one with Norton turned off (for some definition of “turned off”)? The two are not the same …

The file issue you have looks as if something else has these files open. You could try a reboot and then install, and see if that helps.

For what it’s worth, as another data point, the installation worked for me (on Windows 8.1).

Avast Antivirus did its usual “CyberCapture” thing, i.e. executed the file in a sandbox environment, and then, when nothing untoward happened, let it execute for real.

The installer picked up the current installation’s path, and I installed the new version there.

The update installed on my Win 10 desktop without issue. I do not run any third party anti-virus software, only Win 10s standard installation.

Okay, got it: turns out I had to uninstall the existing version first. I somewhat feel like an idiot. The only thing mitigating my total feelings of inadequacy are that this has not happened with any other version of the I7 IDE. In fact, it didn’t even have a problem with the previous version of the IDE in this case.

From a diagnostic standpoint, a few things:

But on both machines: uninstall first, then install the new version – worked like a charm.

Apologies for the confusion and thread bloat on my part.

Okay, got it: turns out I had to uninstall the existing version first

That is odd. You’re supposed to be able to install over an existing version without having to uninstall first, and I’ve just tried this again here, and that works for me.

I did not have to uninstall the earlier edition of I7 for the new install either.

Possibly, but these are classroom machines so I don’t know if they installed that way or not. I am getting reports from multiple students of this warning on Windows (which they all tell me they never got before with the I7 IDE install; including when they retry the previous one): 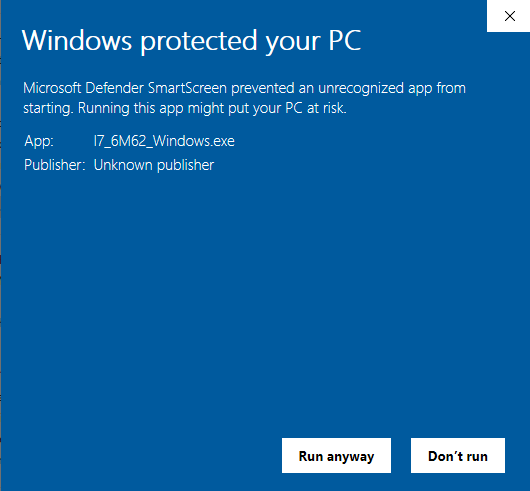 All are also reporting that when they get the IDE installed, they are seeing a lot of this error: 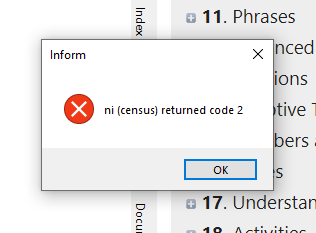 When I had them compile anything, they reported getting this:

When I had them look at the actual console view, they are all seeing errors along the lines of:

Going to have them try clearing out the Documents\Inform folder entirely and seeing what that does.

I can repeat their experiences on my own machine; tried that of course just to make sure that folks weren’t trying to install as one user on something that was previously installed as another.

Of note, though, NONE of these issues happen if I just install the previous version that was made available. That works fine. No warnings, no issues, nothing untoward.

That “code 2” error is almost certainly antivirus-related – I just ran into it last week (see here for my thread requesting help, which includes a link to another, more detailed one). Adding Inform to your whitelist, or temporarily disabling the antivirus program, should clear it right up!

Interesting! Thanks for pointing that out. What’s odd is that this never happened before. And these classroom machines have all had Norton running on them since the beginning. The census code 2 issue does happen even if Norton is not enabled; specifically, smart protect is disabled.

Equally baffling is that this does not happen with the previous version of the I7 IDE on Windows. That installs (with full Norton running) without any issues or warnings whatsoever.

That, of course, points to an easy solution, of course: just use the previous version.

That you get a Windows Defender SmartScreen warning isn’t entirely surprising. From Microsoft’s blurb:

Microsoft Defender SmartScreen determines whether a downloaded app or app installer is potentially malicious by … checking downloaded files against a list of files that are well known and downloaded by many Windows users.

The previous beta has been around for a year, and has presumably been downloaded quite a few times, so it passes the test. The new release will, I assume, eventually be downloaded lots of times, but as I only released it today it’s not often been seen before. It seems likely that the SmartScreen warning will eventually go away of its own accord.

As Mike says, the most likely cause of the “code 2” errors is interference from anti-virus software. The actual Inform 7 compiler that also generates the extension census (“ni.exe”) is exactly the same file as in the previous build, if you check with Windows Explorer you can see it was created back in 2020.

I’d be interested to hear people’s opinion on the whole “vertical tabs on the right” versus “horizontal tabs along the top” issue. I haven’t entirely decided which I prefer, though having the tabs vertically feels like it makes more sense on a widescreen monitor.

Regarding the positioning of the tabs, it’s interesting in that one of the reasons I wanted to update the editor was because the interface was now more consistent between the Mac and Windows versions.

However, I’m now finding that students on Windows who tried the “vertical tabs” approach have all switched back to the “horizontal tabs.” Those on the Mac are now voicing that they wish they had the option to move the tabs horizontally. The common expression of preference was that it was easier for the eye to drift up to change panels rather than drift all the way to the right.

Speaking for myself, I move between Mac and Windows versions quite a bit, but I have to say that I too find my preference for the horizontal approach.

I’d be interested to hear people’s opinion on the whole “vertical tabs on the right” versus “horizontal tabs along the top” issue.

One thing I noticed on my system (using a 4K monitor at 150% scaling) is that the text on the vertical tabs doesn’t seem to anti-alias properly. Not sure whether this comes across properly on a screenshot, but here goes: 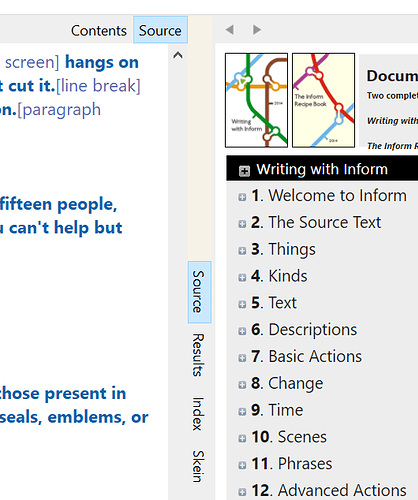 (If you don’t see it, please take my word that it looks significantly more jagged than all the other text in the application.) The horizontal version looks normal.

Apart from that, I’m inclined to agree that the horizontal version seems more “natural” somehow.

I definitely prefer horizontal tabs and set that option in Edit>Preferences>Advanced tab.

On the one hand, I didn’t actually have a strong negative reaction, as I thought I would at first, because of the change to what I’m used to. I could adapt to the new layout.

But I do prefer the old style, because:

If it’s not too much additional maintenance work, I’d suggest to keep both options, but set the default to the old horizontal style with the tabs on top.

I agree with others who prefer the horizontal tabs and as such have set mine accordingly.

One thing I noticed on my system (using a 4K monitor at 150% scaling) is that the text on the vertical tabs doesn’t seem to anti-alias properly.

Yes, I have noticed that. In both the horizontal and vertical cases it is just using Windows’ font rendering, which seems to make a better job of anti-aliasing in the former case than the latter. As the former is by far the commonest case I guess that that is not surprising.

Zooming in on a screen shot of the buttons is interesting. A composite image: 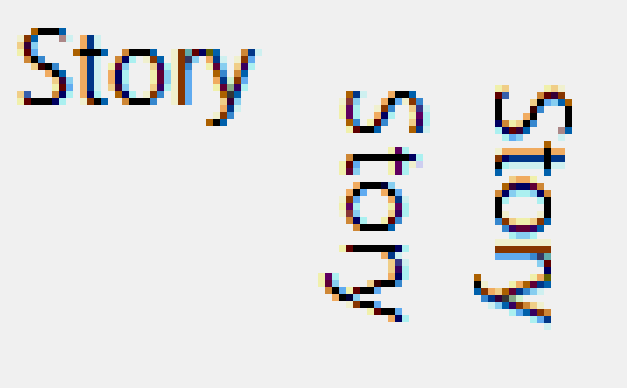 Sub-pixel rendering should be accounting for the higher horizontal density of most screens. (And if Windows is responsible for rendering the text then it should account for all the various pixel options.) Manually rotating text will probably be counterproductive.