While we all wait for the next version of Inform 7, work continues on updating the Windows Inform 7 front-end. The front-end and the compilers are now 64-bit only, and it’s time to make a beta test release of this work to see if there are any problems. The installer is available from https://github.com/DavidKinder/Windows-Inform7/releases/download/6m62_w64_b1/I7_6M62_Windows.exe

Changes new in this build:

Changes since the initial release of 6M62 that have been seen in earlier updates:

Congrats on the release!

I’m not sure where to send bug reports, but at first glance, the Extensions tab still doesn’t work for Windows users with Nordic letters in the name (“Björn”, in my case). Only difference is you get a blank page instead of the previous browser error.

But more specifically to your problem: I’ve just tested locally creating a Windows user called “Björn”, and the Extensions tab works for me, running as that user. So whatever the problem is, it’s not solely due to the user name. I’ll send you a PM, reply if you want to help debug this further.

Will there be a “portable” version released? i.e. a zipped folder containing the binaries and other required files, without requiring an installer.

I’ve no objection to someone else doing this, but I’m not going to take on the responsibility for it.

There is a Inform version option within the Settings menu in this update. Will an option be available to compile i6 code directly in this IDE?

The version setting will provide access to older versions of the Inform 7 compiler. It’s unlikely that Inform 6 will be an option.

A second beta of the 64-bit build of Windows Inform 7 (6M62) is now available from https://github.com/DavidKinder/Windows-Inform7/releases/tag/6m62_w64_b2

This build replaces the old documentation and source searching functionality with a “Find in Files” dialog that matches the OSX front-end.

The version setting will provide access to older versions of the Inform 7 compiler.

Is it possible with the latest beta of the Windows IDE to select the Inform build yet, like the interim macOS IDE?

I specifically need the 6L38 build.

Is it possible with the latest beta of the Windows IDE to select the Inform build yet, like the interim macOS IDE?

No, no older builds are available like that yet. It is unlikely that that will happen on Windows before the next big Inform release.

I looked at the new documentation and tried some of the samples. I didn’t notice St Peter did not have a period. My first trouble shooting.

Thank you for the new update.

This build replaces the old documentation and source searching functionality with a “Find in Files” dialog that matches the OSX front-end.

OMG SWEET!!
Holy cow. What a quality of life improvement. THANK YOU!!

A third beta of the 64-bit build of Windows Inform 7 (6M62) is now available from https://github.com/DavidKinder/Windows-Inform7/releases/tag/6m62_w64_b3

Changes in this build:

@David: Do you plan to to add the possibility to compile with version 6G60 as well? The reason I’m asking, is I still use this version because it is the last compatible version for the germ GerX extension.

Do you plan to to add the possibility to compile with version 6G60 as well?

Eventually yes, the plan is to support more old versions than at present.

A fourth beta of the 64-bit build of Windows Inform 7 (6M62) is now available from https://github.com/DavidKinder/Windows-Inform7/releases/tag/6m62_w64_b4

Changes in this build:

Just a note that with Norton activated, it gives a ton of errors regarding the installation; specifically “suspicious action blocked.” When I turn off Norton safe protect entirely, I find that the installation itself shows a lot of the following: 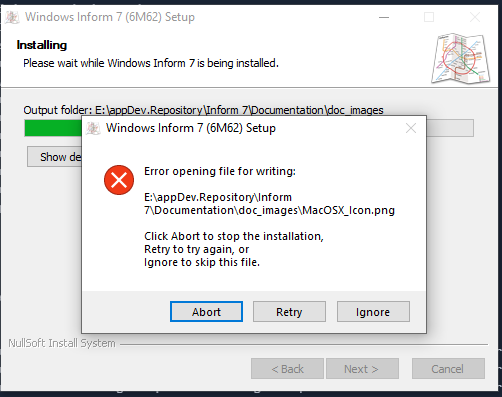 It’s apparently bad enough that Norton actually kicks in again and displays a series of warnings: 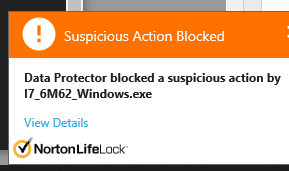 Norton generally only overrides your decision to turn off smart protect if it finds something that it considers particularly egregious. My guess here is just the sheer number of the above “error opening file for writing” messages, which happens for every single file.

The same applies if you try to run the installer as an Administrator.

I tried re-installing the previous version of the Windows Inform 7 IDE (to the same directory; not running the executable as an Admin) and that worked fine.

Without any details of what Norton is objecting to, this is unlikely to get fixed. Very little has changed in the installer between this release and the previous one. Anti-virus and anti-malware systems generate so many false positives these days that it is very hard to take them seriously.