Here’s my top ten for what it’s worth. This isn’t speculation or number crunching, which I find fascinating too, so do look in Autumn’s topic!

I just realized I’d never done this, because top ten lists are always tricky–they feel exclusionary, and you feel like you should say “Oh, this just missed” or “Oh, that just missed.” And I know I feel I should just let a few more games in, and a few more, until, say, all but ten are mentioned, and that feels cruel. Also, if you only played 20 games, it can feel exclusionary to give a top ten. But I hope people find this interesting to compare/contrast.

My ratings tend to be bell-curvey. My median and mode were both 7. (7 had 19 votes.) I wound up giving a mean of 6.358, or 6 + 24/67. I eliminated my own game, as well as Thanatophobia and Lottery Ticket, which I enjoyed, and I also appreciate the authors helping me out with some last-minute stuff in my own entries. I think last year my ratings were slightly below 6.

At any rate I feel a definite Lake Wobegon effect: it felt like 50 entries really should be top-half, but that’s mathematically impossible to have them all there! So there will be disappointments from my perspective.

Here are my top ten, alphabetized by points scored.

(okay, I lied. I have a 3 way tie for 9th. So it’s not fully alphabetical. And maybe I rigged the numbers to make them that way. But I wanted to include all 3 entries.)

Top ten? Hmmm… The first seven are quite clear (and strangely organised in categories without intention on my part).

I had to go back through my reviews to fill the final three slots… The Princess of Vestria, Let Them Eat Cake, and A Walk Around the Neighborhood.

EDIT: I only played 24, so a top 10 is asking to rank almost half my sample. I’m painfully aware that the other 2/3rds of the games are booing me from the stands and holding up a big banner: YOUR LOSS MATE ! !

I actually put all of my scores into a spreadsheet so I could compare them to each game’s average (I’m well aware that I’m a slightly harsher grader than the average IFComp judge). According to that, my median and mode were both 6, my mean was 5.8, and I also had a pretty much exact bell curve in my ratings.

My top ten by rating (alphabetized without saying what rating each game got) were:

I played all the games save 3—my Mac is refusing Wineskin for whatever reason so I couldn’t make the Windows executables work. I also, of course, didn’t rate my own game.

I can’t see my votes anymore, nor did I tracked it before

So I don’t remember what I gave for most games I played/reviewed… But here were my highest-rated ones (only remembered because I was talking about it yesterday with someone…):

Looking at the reviews, these might not be in the top 10, but those are the ones I liked most.

Like Manon, I can’t remember most of the scores I assigned, but here are the few at the top. Take into account that I didn’t get to play more than 20 games, because Life, so some games that deserve to be here probably aren’t.

Weirdly, according to the internet my scoring was not Normal (not sure why I’d start now anyway), but a Pearson (Beta) Type 1. Steep up at the bottom, tailing off at the top.

I already published my top 5, why not more?

THE 2022 ROOTie TOOTies! (Yes! I quadruple down on it!) The top 5 games this year, according to JJMcC’s ROOT not necessarily but definitely in order:

I would not have predicted the weird choice-narrative/classic parser clustering this ended up as.

I wonder if I Wish You Were Dead might get the Golden Banana award, as I’ve seen it listed several times here while I’ve seen negative reviews elsewhere.

I really don’t know who will place highly this time, it’s always so hard to guess. If I had to pick anything, I’d say According to Cain and A Long Way to the Nearest Star were likely to be the highest playing parser and choice games, but I really liked a lot of games in this comp that may not necessarily place high.

I only played 20 games, so don’t feel happy giving a top 10. However my mean was 5.6, and my median and mode 6. I tend to be quite a tough scorer. My scores this year ranged from 2 to 10, and had a clear bell curve distribution. 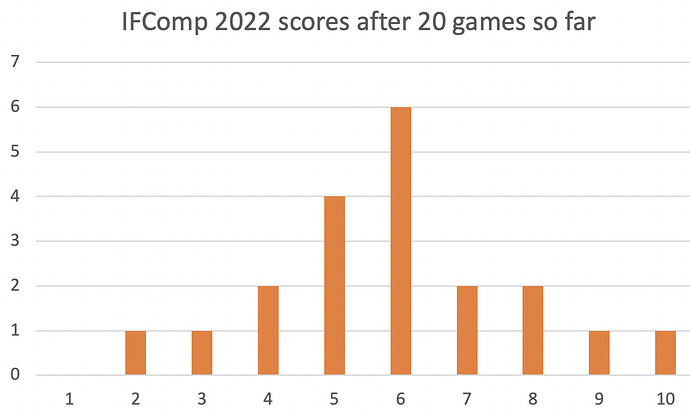 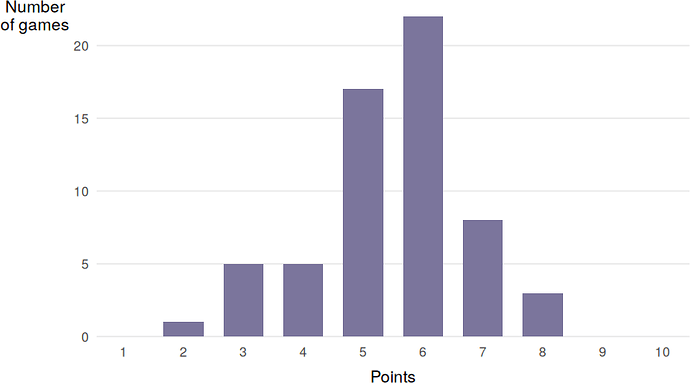 I try to be consistent in my rating scale over time (across IFComps) and didn’t rate any games 9 or 10 this year. However, I still think the top three games (8 points) were excellent (just not ‘perfect’ or ‘almost perfect’). All games scoring 7 were also very good, and I recommend playing them.

Compared to other people, I think I give fewer very high scores (8–10), fewer very low scores (1–3) and more 6s. So to try to be fair to the games/authors, I always use the (personal) randomiser and try to mostly stick to the playing order assigned, though I may skip the longer (more than 2 hours) games completely and change the order around a bit (e.g., if I only have time to play a 15-minute game).

Overall I was floored by the amount of great work in the comp this year, and it’s exciting to see a lot of games I didn’t play showing up in top-ten lists - there’s another season of play ahead!