Oh, I do miss RPN on calculator apps. Once you grasp the concept, it is so much more intuitive. My old HP 11c is still in daily use! So, more power to your elbow!

Oh, I do miss RPN on calculator apps.

There is https://thomasokken.com/free42/, although I have to admit I don’t use it as my HP-42S still works just fine.

I do have emulation of HP 16c on my desktop, running under wine. Can’t recall where I grabbed it. And I see that one can get RPN apps for Android. Never occurred to me to look.

In fact, I’ve just installed HP16c on my phone. Yuppeee!

I have a pretty good collection of original HPs. Unfortunately I let both an HP-42 and HP-42 slip through my hands.

I keep an HP-50g on the desk and use it frequently. It does just about everything.

I have had the HP-16 (programmer’s calc) clone on order for a couple of week. That is one HP that I never owned. I’ll post back when it arrives in the next week for so.

Huzzah for Swiss Micros! I’ve been wanting a DM42 and a 16c clone for a while.

I received my Swiss Micros DM16L a couple of days ago. It is very well constructed, better than the HP models from that era. The case on the 16L is titanium. It feels very robust and a good weight in the hand. The buttons/keys from the early HP era had injection molded lablels that never wore off with use. The keys on this model seem to be labeled in the same fashion as the newer HPs. The labeling on the keyboard off the keys looks nice and sharp. According to Swiss Micro, it is laser etched.

The key button feel is the same as a quality HP keyboard, precise with a firm click.

I have worked through a copy of the original HP 16c user manual. All functions and operations of the 16L work according to the HP manual. The binary functions are extensive and easy to use. Easier than other models of HP calcs. You do not have to prefix binary numbers with # symbol. Just enter them directly. Very nice. It is what you would expect from a dedicated “programmers” calculator. I am please with the purchase.

I have thought about ordering the Swiss Micro 42. I am reluctant since I have numerous HPs that have the same functional availability. 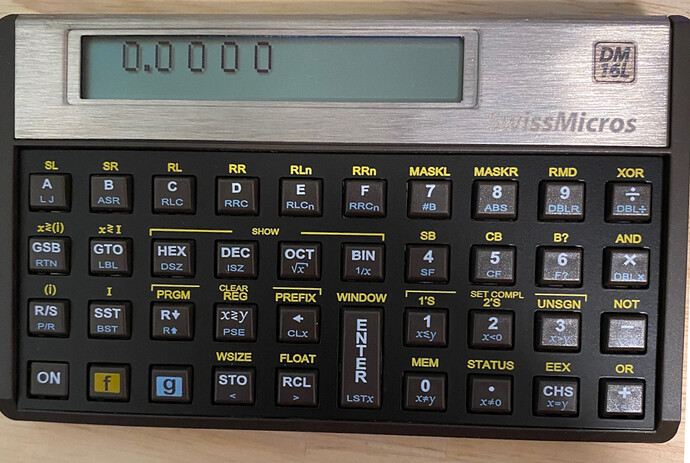 Hey looks good - almost like the original that I have. Mine has Hewlett Packard at bottom left with a silver? marque around the perimeter and of course it says HP 16C in the little square at top without the Swiss Micros logo either.

I think the discussion has strayed a bit from the original topic, which was “Simplifying calculations in Dialog by using reverse Polish notation”, but it was fun to follow this enthusiasm for old HP calculators.

The truth is, I was born after those HP calculators, so I only know them because my father told me of those glorious times when he used his HP with RPN!

I may have to reconsider. I always enjoyed my 41 and 42. Now that I think back, I’m pretty sure they were lost in my 1990 house fire along with my early 70s HP-45. (It help me make it through my undergrad courses.) The DM42 would cost well over $200 delivered.

An HP42s in good shape will cost you a decent amount more than $200.

Even non working ones seem to get close to that on ebay.

Hastily bending the thread back to IF…

Has anybody ever done an RPN IF authoring system and/or language? I guess I’ll be now spending idle time thinking of recasting A-code from its current PN to RPN. My guess is it would simplify internals quite considerably.

Hastily bending the thread back from IF again, I have one HP 48SX and one HP 48GX. Great calculators. I mostly use them to run CHIP-8 games, small pixel-based (ie. non-IF) games that were popular on microcomputers in the late 70s and then had a resurgence on HP 48 calculators in the early 90s.

A year or so ago, text based adventure series were modified to run on the more modern TI calcs.

I thought it was interesting.

I have thought of using RPN. It would definitely be in the Retro genre which seems to have quite a bit of activity. Think Punyinform.

I’m vaguely thinking that an HP48 could possibly host a Z-Machine.

I’m thinking it would. More people seem to grok RPN than do PN.

That would be very surprising. The verb-noun-noun structure is much closer to ordinary speech (and to IF) than noun-noun-verb. Would you rather “dig soil [with] spade” or “soil [with] spade dig”? Unless you are a native German speaker, that is.

Well, if you want retro, console build of A-code games allows to experience gaming in the full retro 300 baud glory !

Younger gamers have no idea of the frustration (and pleasure, and anticipation) of sitting in front of a juddering teletype, which is slowly revealing game’s response!