So I’ve developed my first android app now and I’m really curious about your feedback! The app is completely free to play, don’t worry.

One hint of magic

This is a text-adventure game similar to a CYOA. For everyone who loves fantasy! 100% free! Make your own choices! Are you able to protect yourself and your friends from the threatening darkness? Change between the perspectives of the protagonists! Unlock special scenes! Encounter over 21 mysterious characters! Discover many visual backgrounds and graphics! Dig deep into the story of five extraordinary girls with supernatural powers, who will find the way to a magical school, where special ch...

As I already mentioned in the headline, this is an interactive text adventure story app, so you can make your own choices to alter the course of the story.
I’ve orientated myself on certain other text adventure games and specifically added a lot of graphics and illustration, because that’s what I’m always missing when reading good text adventure story games and I believe it pulls the reader even deeper into the story and makes the characters more realistic.

Short overview of the story:
The story is about five girls, who discover supernatural abilities like a special bond to one of the four elements. Laurel, the protagonist, also is repeatingly dreaming about a certain boy, but every time she encounters him in the dreamworld, his face looks unfocused. One day, a shady figure appears in her dreams as well, watching her from the shadows and threatening her. Laurel also encounters four other girls in the real world, who seem to have supernatural abilities just like her, though some of her friends seem closer to the darkness than Laurel might have thought at first gaze. The following days, the five girls meet up regularly and eventually find the way to a hidden school that teaches magic. But not all is as well as it seems. Laurel keeps getting into bad accidents and someday, one of her friends suddenly disappears without a trace. Is this related to the creepy shadows, that lurk around the school? Are they somehow connected to the mysterious school director? The shadows are coming… Can you keep your friends safe from them?

The whole book is parted into six parts and I’ve just released the first part and I’m already working on the second part now. A second book is planned as well. 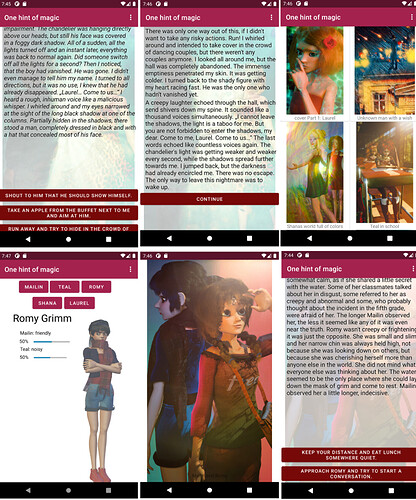 I tried to download directly through my phone. It didn’t show up with a search. It worked perfectly with the link in your post. I wonder if the search would find it with a the German title?

The artwork is very good. There is quite a bit of text displayed in each screen with no breaks. That is hard for my old eyes to deal with.

A very nice game. I hope others give it a try. We all need that ray of light these days.

Yes, it is only shown in the search when clicking the tag “new”, probably because it’s a new app and doesn’t have many downloads yet.
Thanks for the feedback, glad you liked it.

I’m still experimenting a bit with the text size, I will try to support bigger text sizes in the settings when I release the next part.

Looks nice! Just wanted to say that from all I’ve heard the people who own the CYOA brand name are real copyright trolls, so possibly you’re better off removing that particular phrase. (Not sure, others here might know more about this.)

That’s definetly good to know, I’ll adjust it, thanks for the advice!

Choose your own adventure seem like a common terminology and has been around for a long time.

Yeah, but the terminology came from the Choose Your Own Adventure books. It’s like when first person shooters all used to be called Doom clones or you would “Xerox” something to copy it. Those moved on to better non-trademarked terms. CYOAs never did. So… uh… Blame the fans, I guess?

Not that I’m saying they’re being completely justified in their actions. But at the same time, I bet Id Software would also bring down the hammer if 35 years after they popularized the genre, people were still calling things “Guns Blazing Doom” (IOW, using “Doom” in the title to clarify that it’s an FPS).

There’s a well-known roguelike inspired by Doom which is called DoomRL. I’ve never heard of any objections coming from ID!

Scrap that. They actually did have to change the name to DRL…

I’ve played that game actually. It’s really good. But yeah, they had to change the name.

Ironically though, everyone uses the term “roguelike” for nearly everything these days and I haven’t heard the creators of Rogue complain. Do they not have a trademark on the name? Or maybe it wasn’t for sale in the first place? I don’t know much about the history of Rogue.

Rogue was an open-source game. Or rather it was freely shared on mainframes before the idea of “open source” was codified. Same as Adventure / Colossal Cave.

Could you imagine the ramifications if the creators of Adventure somehow managed to trademark the term?

Although CYOA getting hit with a trademark violation would be kind of fun.

We would have called them something else in 1979 and not noticed that this was weird.

Scrap that. They actually did have to change the name to DRL…

And then they made it into a remake/full game named Jupiter Hell, if anyone wants a more polished game.

I meant more like right now. I don’t know enough about trademark laws though. Is there a limitation to when you can claim a trademark on something?

(Not bothering with the long answer, which would be a long detour and I’m not a lawyer.)

In the US a trademark can be registered forever. It’s not like it automatically expires after a number of years, like copyright.

Now, I’m not a lawyer either (I’m not even American), but as I understand it, you need to actively defend your trademark to keep the legal protection, and it needs to be renewed every ten years, and at renewal it needs to be in active use for interstate commerce. Even unregistered (or lapsed) trademarks are somewhat protected, though, just not nationally.

Just an attempt at contextualizing. Again, I have no idea what I’m talking about and actually basically just googled this five minutes ago.

Text adventure games require a parser and the ability to try bespoke actions rather than on rails choices. This is a fundamental feature of the genre.

Thanks for the feedback.

I’m surprised how much information I gain through this threat. But I must admit I’m new to the android game world, so thanks for the insights.

Someone did register “Interactive Fiction”… in 2008. Abandoned less than a year later though.