"Murder in the Mail" feelie

I’ve started a new storytelling system called “Murder in the Mail”. The entire story is told through letters, objects, and artworks physically posted to the reader over the course of several weeks.

The first story is “A Bloody Birthday” in which a group of art students gather to celebrate their friend’s birthday—but she is killed during the party. One of the artists is the murderer, and the reader must try to figure out who it was.

One of the central conceits of the “Murder in the Mail” system is that artists reveal their true selves through their work. Therefore, looking at the art of the suspects will help “you” figure out who is the murderer.

In some ways “Murder in the Mail” is similar to “Hunt A Killer” except it’s a lot cheaper, more visual (there are half a dozen artists involved in the first story, and there will most likely be more for future tales), and more narrative in style (with a clear beginning and end, and subplots).

I chose the art based on four factors: Did the piece work in an A4 size? Did it make me want to hang it on the wall? Was it distinctly different from all the other artworks? And, could it provide at least one clue about the characters that led towards the reveal of the killer’s identity?

The objects are small, but also provide clues (as well as involving all the senses as much as possible) eg an incriminating photo or a scrap of distinctive fabric.

The reader/player is Hachi Sasuki, cousin to the murdered girl, Naomi.

I’ve set up a designated public forum so readers can compare clues and revelations with one another, and also so artists who’d like to be involved in future stories can introduce themselves (and when I’m ready, I can pick a selection directly from the forum and start putting the next story together - although FYI I’m limited to Australian and New Zealand residents). I’ve also set up a bank account and PayPal (MurderintheMailStories@gmail.com) so people can buy the story fairly quickly and easily even though the first mailout won’t happen until June this year (after a Kickstarter campaign from February 17-May 31st).

The Kickstarter campaign makes it simpler for me to organise mail-outs in batches, as well as giving people a range of unique things to purchase (such as a ‘premium’ version of the game that include larger physical objects, or a commissioned story that I’d write specifically for that person and then post directly to them on the back of a postcard).

I will have postal minions working for me at key locations around the world. Probably New Zealand (I’m in Australia), Hong Kong, USA, and hopefully the UK. Overseas versions of the tale will probably cost an extra $10 and/or get sent in a single package.

This was all born out of conversations with Michelle Lovi, the head of Odyssey Books, who publishes my novels and has also started a new imprint called Publisher Obscura specifically for visually stunning books for adults. So although I’m running things, it’s a Publisher Obscura ‘book’. In fact, 13 months after release “A Bloody Birthday” will be turned into a ‘normal’ physical book and it will be impossible to get the full sensory/artistic/real-time experience any more. But hopefully there’ll be a new “Murder in the Mail” tale by then.

Good things about this storytelling system:
Tactile and sensory experience.
Readers can form a community.
Every unit is unique.
I have ultimate power over the project (or is that a bad thing?)
Each story contains several gorgeous art prints.
Each character is written by a different published author.
With 12 contributors, it’s a convenient sampler of writing and artistic talent.
At only $40, it’s accessible for almost anyone (unlike other posted stories/boxes, which cost a LOT).
It appeals to both readers and gamers.
It is an instant collector’s item.

Bad things:
It costs a lot to make (roughly $25 per unit).
It takes a lot of explaining to every single customer.
Each unit takes a lot of labour, mostly by me (although I’m really enjoying that at the moment… anything to avoid real work).
The story might be confusing to people who’ve never read interactive fiction or any other kind of narrative game.

So… what am I missing? I’ve talked to a lot of novelists about this, but not many gamers. Please do share your ideas with me (keeping in mind that I’ll either ignore them or steal them, both of which may be frustrating for you).

I’m advertising it in person at various conferences in my area (Sydney and Melbourne Supanovas, CanCon, etc) and supplying review copies to people in both novel-reviewing and game-reviewing spheres.

Here’s one of the pieces of art (there are five clues and over ten Easter eggs): 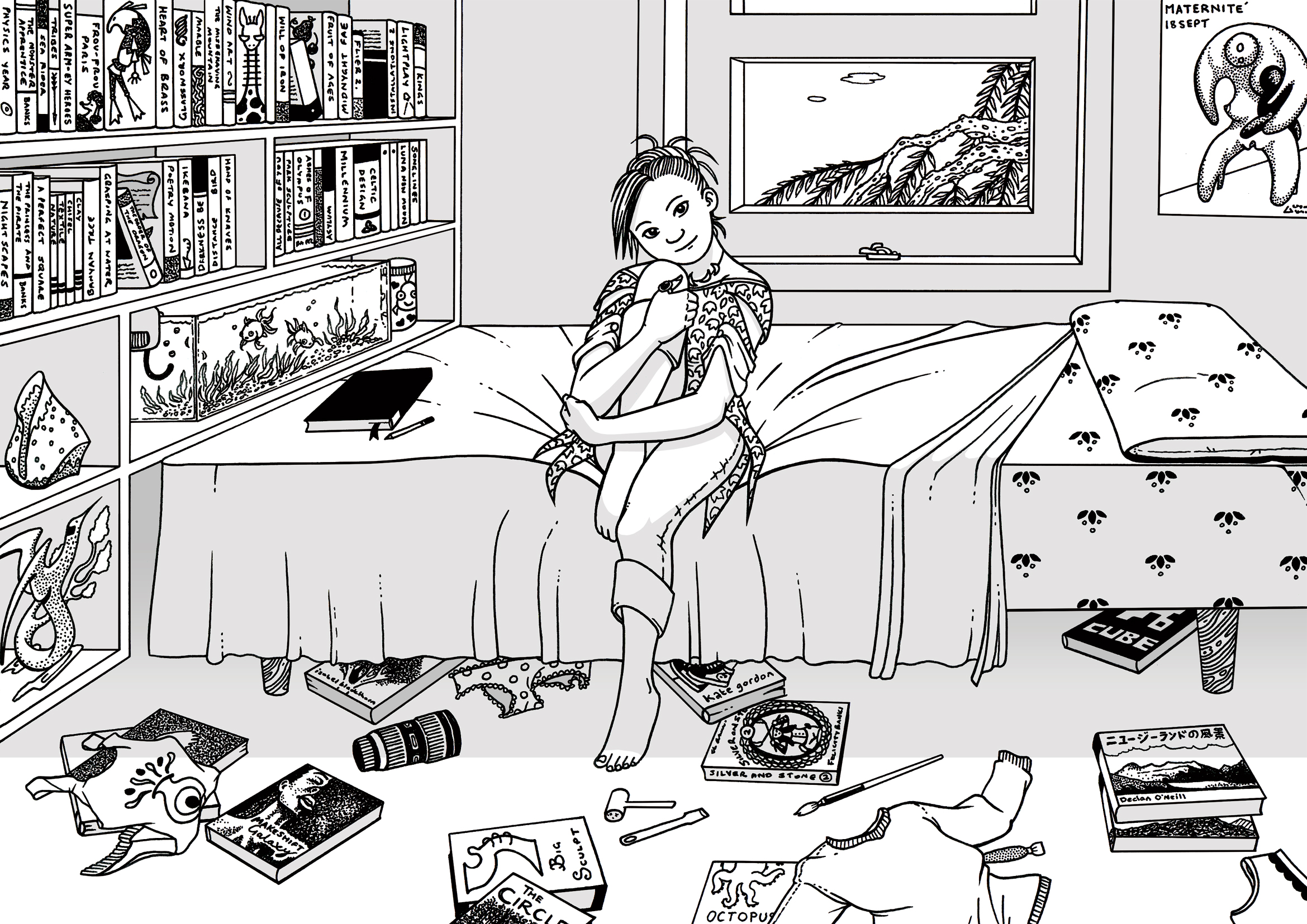 This sounds really interesting. I’d like to suggest a radical variation;

Could there also be a digital version?

Now, obviously one of the whole points of this is physical feelies, which is definitely cool, but there’s the whole issue of international distribution, where the cost of sending stuff - even paper, can add up fast. Since the artwork will be digital anyhow, it seems like a way to reach people that otherwise could not play.

Also, another idea that i admit isn’t thought through;

The picture posted has definitely scope for a LOT of hidden information. Supposing there was an “app” which could display the artwork so the player could tap on parts of the picture for clues/information (bits of text that would popup). Perhaps to make it less of a “randomly tap everywhere” problem, the picture could be zoomed/panned, so you’d actually have to find things. Whether this would work or, in practice, degenerate into a where’s Waldo or find the missing fish exercise, i don’t know.

13 months after the official release date, there will be a purely digital version, but someone else pointed out that a lot of people would buy a $5 digital version over a $40 experience, which would be a bit of a shame. But the physical version will be “retired” at the end of its run, and replaced by both digital and standard print versions.

The art will all by physically printed (gloss for photos, textured paper for some, etc).

The idea of game-ifying the art is a good one. I’ll have to think about doing that. The mechanics are beyond me, but I know plenty of people with the right skills.

Thanks for thinking outside of the box!

PS Here’s the trailer for the first story: