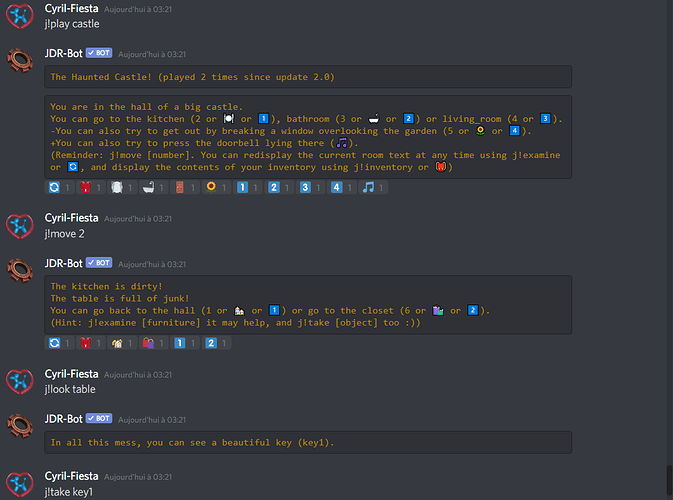 JDR-Bot us him own syntax in his script. Anyone can write a script (interactive fiction, escape game or other game) on it, test it, and send it to me, so i can add it to the official ftp.

On the script, you can use pictures, sounds, discord reactions, variables, conditions, event, custom action/commands (if you want to make a parser game, it’s possible !), etc.

JDR-Bot is Discord Certified, and it’s on 270 guilds. I hope it will be as popular in the English-speaking communities :s
One of the scripts is a adaptation of an Game-Book from the French Editor GameFlow

I hope i can adapt other professionnal scenario in the future

JDR-Bot is a French Bot, but since … today… JDR-Bot is now translate in english (bot, commands, texts, wiki, etc. !). It was a hard work to translate all of it alone ^^’ Maybe there is many bugs/translate error left :s
Currently 10 scripts are translated, but others will come soon.

All infos, commands, how to write a script, how to play, etc. : Official Wiki
To test or for more information, join us on discord : Official Discord (or add it on your guild

)
Your feedback (opinions, bugs, suggestions) will be read with great attention.

I hope you will enjoy it.

Is there a way to import games from other formats (like Inform?)? It would be cool to have an easy way to play games as a group in discord.

A generic Discord wrapper for RemGlk would be pretty easy.

currently it’s not possible, the bot use its own syntax (it use discords features like Reactions or Vocal)

But, i hope i can add other interpreters in the bot on the future

(in the first time, a pdf → jdr-bot can be easier)

A generic Discord wrapper for RemGlk would be pretty easy.

And that’s what Xyzzanie is.

Hi! I wanted to be able to play IFs in Discord but I only found bots that could play Z-machine games (and not Glulx), so I wrote my own bot in Python. You can find it here: https://gitlab.com/Natrium729/xyzzanie I hope it is enough documented to get you started. It can play any parser games a long as there exists a remglk implementation of the virtual machine concerned. Note that you’ll have to host it and compile the interpreters yourself (all instructions are at the link above). It hasn’t…

But I think it can violate Discord rules since I believe you’d need the authorisation of an author before playing their game, since its content will be stored on Discord’s server.)

About JRD-Bot, from what I know about it, it’s also an authoring system for games that can use Discord features such as reactions. It’s not only a player. (Ninja’d by @Cyril-Fiesta