This is for the most part a maintenance release of Inform, incorporating fixes for nearly 300 issues reported with the previous build, but there are also minor language improvements. The user interface for Mac OS X now supports Extension projects, and a new animated Testing panel replaces the old Skein and Transcript.

(The Windows and Linux builds are forthcoming)

Removing “stored actions”? YESSS. This will make some of my code so much cleaner!

What great news! Merry Christmas and thanks to everyone who worked on this release.

I’m sorry, but I couldn’t find the answer to this question in the changelog (doubtless as a result of a weak search-fu on my part, for my shame):

Has the issue where a game can grow too big (Flexible Survival) been solved in this release?

There have been several “source code too large” bugs over the past two versions, some turned up by FS and some by Daniel Fremont’s testing. All of those are fixed in this release.

(Some bugs reported since September are still open, but none of them are size-related.)

This is great news! Merry Christmas, and lots of thanks to the team (and beta testers, bug report folks, etc…)!

When can I joyously unwrap the windows version?

Best IF Christmas present is new IF toys.

Thank you Graham, Emily, Andrew, Jesse, David, and everyone else involved in the new version.

There have been several “source code too large” bugs over the past two versions, some turned up by FS and some by Daniel Fremont’s testing. All of those are fixed in this release.

(Some bugs reported since September are still open, but none of them are size-related.)

Source too large? Like the issues I’ve been running into couple weeks back? o.o I’d love to see those never again ever ever ever.

I’m not sure, but trust me on this - the issue I’m referring to (nuku_v’s) is one anyone is unlikely to run into, ever. His is a gargantuan project with collaborations from multiple authors. Love it or hate it, you have to admire it.

An unfortunate bug that probably should be reported as “minor” but is intrusive enough to cause substantial problems:

The gray panel that contains the words “Inform Build 6M62” along with a glyph – located just under the project name at the top of the screen – moves down and covers parts of the work spaces when the project window is enlarged from its default size. This panel cannot be dismissed and simply blocks the view. It should either disappear after a few moments like splash screens usually do or else it should remain anchored in the top bar of the window and not move down when the window is resized.

I’d try to attach a screen shot here but that’s apparently not possible. I tried to post a bug on Mantis but the 6M62 version is not yet included in the version popup so apparently that’s not possible either, plus there’s no provision for posting a screen shot there either.

Kudos to all who have worked hard on this version. Too bad that this somehow got through.

Please do report it on Mantis, we can change the version later.

I’ve posted the issue on Mantis. Here’s a screenshot: 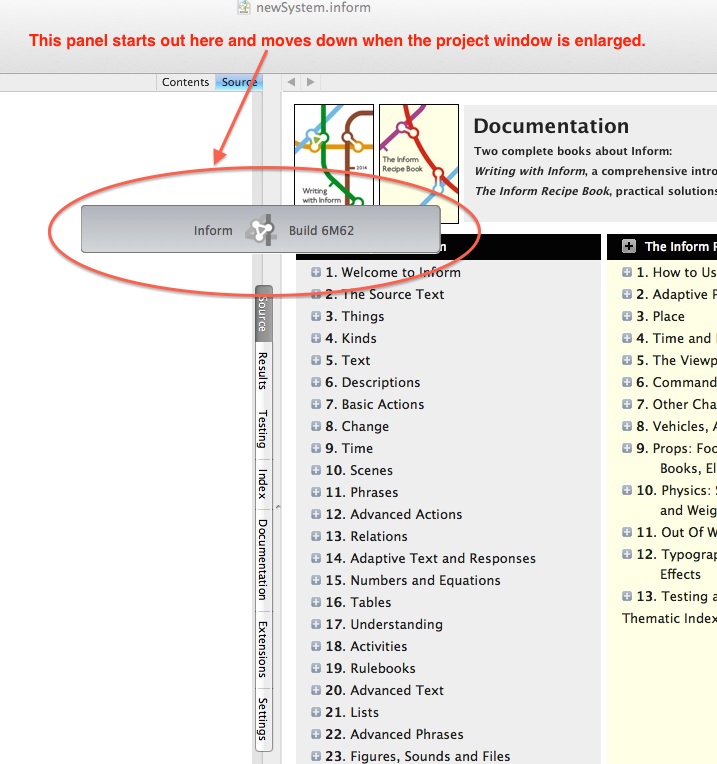 I’m getting error 11 with short source texts, even when I pull out all the extensions. Tried to regress to previous version but OS indicates the downloaded file is “broken”.

The older version downloads on the site haven’t changed at all.

Feel a bit silly starting my posting here with a problem…

I’m currently running 64-bit mode on a Mac that can definitely handle that (although I usually use 32-bit mode; it’s Snow Leopard 10.6.8, so that part’s all right) and can’t get the new version to run at all. Do I have to change over my default mode to always run in 64-bit mode? Is there something else I’m possibly missing? I’ve tried deleting the old version.

(I also have the problem report if that’s of any use.)

Which obviously of course means the problem is on my end. Sorry to even mention it.

And thus apparently ends my use of Inform 7. The new version crashes with error 11 that the compiler can’t even explain. I’ve removed extensions and tried very simple source texts. Reverting to previous versions alerts me that the downloaded file from the I7 site is broken and I should move it to the trash. Apparently nothing is wrong on the Inform end, and nobody else has any idea what this could be, so I’m screwed. I’ve restarted the computer, trashed Inform before installing a new one. I brought up Baker of Shireton and after correcting the errors now that capitals are different from lower case, it crashes with no explanation and compiler error 1. My bad for upgrading in the first place.