I’m trying to get a quick understanding of how Inform 7 Extensions are available on the web app and through github.

I can see those 38 extensions under her author page. However I only see 9 listed on the i7/extensions repo. The data also doesn’t seem to be in the web app repo itself.

Where is the data that is backing the I7 Extensions Library coming from – e.g. where is it getting those other 29 extensions listed under Short?

There are quite a few that come installed with Inform itself: 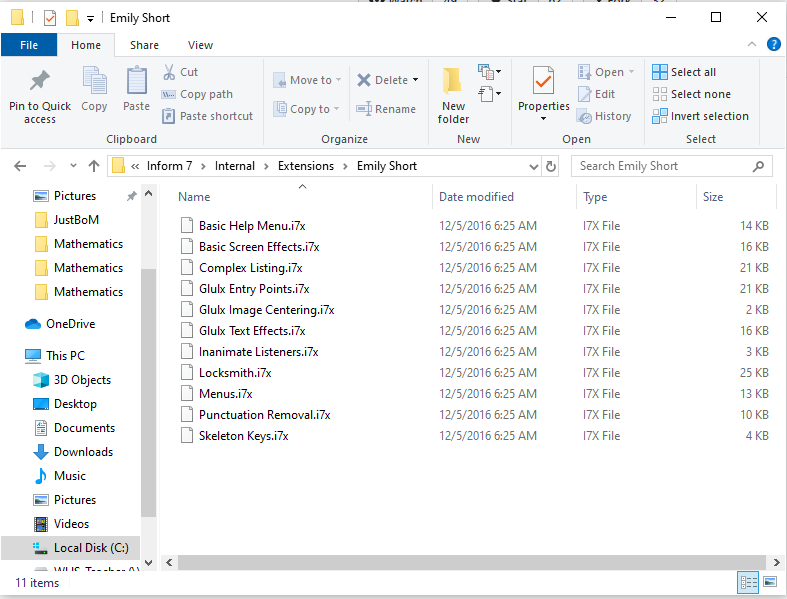 That still doesn’t account for the others. I expect that that comes from the fragmented nature of Inform’s extensions, which have had like 3 or 4 ‘official’ websites over time.

I don’t believe the GitHub repo was intended to contain all the official extensions. There’s an explanatory post here about which types of extensions can be found where (although the Inform7.com website has undergone changes since that post was written, and I don’t know if there are actually any extensions available there right now, so maybe disregard that part).

I believe the https://i7el.herokuapp.com/ website was intended to be more comprehensive, but it hasn’t been kept up to date.

I would check the Public Library if you are looking for the most “official” source of extensions currently available.

Thank you, that linked post-reply is very helpful.

The https://i7el.herokuapp.com/ site is liable to go away any time now; it is using a server version that is being retired by Heroku and I am not going to be doing any updates to it. AFAIK there are no extensions that are only accessible on it.

I must note, that based on the timestamps on emshort.com and I7el.kerokuapp description, that probably the majority of those extensions aren’t up to date, being of 2015 vintage for 6L38, 6L02, 6G60, only “simple graphical window”, vintage 2018, being for the current 6M62…

Surely she has her reason for being not much active, so let’s find volunteer for mantaining these extensions, if they are not obsoleted in the meantime by other’s extension and/or I7 library.

Some volunteer maintenance has been happening at the github repo, which is where this discussion started. https://github.com/i7/extensions/tree/master/Emily%20Short

I am hoping that we wind up with a coordinated, ongoing volunteer effort to maintain extensions, to go along with the open-source I7 release. (I also hope that’s coming soon…) I chatted a little bit with Graham about this last year, but I don’t know what his plans are.

Currently that extensions github repo is organized by author at the top level. If I am understanding right, would it make sense to give it a top level hierarchy that distinguishes between the “public library” that appears directly in the Inform IDE and everything else (the current repo contents)?

Would it make sense to split it between

If so, I’d be happy to put together some pull requests to mirror the Public Library into the github repo.

Optionally, could also layer past / outdated versions from the old heroku app into the commit history, superseded by the PL versions.

Does the Inform 7 extension format provide a method of recording which version of Inform it targeted (like “6L02”), or a minimum I7 version / maximum I7 version (if known)?

Where did that information come from? It doesn’t seem like it was in the .i7x files.

No, and unfortunately not even the Standard Rules had updated version numbers (even though they were updated between releases!) For the Heroku app that was just me adding in manually the versions I knew the extensions could be used with.

Your best bet is just to go by date. If it’s dated to after an update of the core I7 compiler then it probably will support it.

Hmm. I see how if the dates were aligned to I7 compiler releases then you could infer a fair amount from it, hopefully.

Could the extension format add something in the future that would allow it to contain this information?

I’m thinking something very simple that could be both descriptive and prescriptive:

…it could then potentially be parsed – for example, the Inform IDE “public library” interface having a way of choosing a latest version of an extension between multiple public versions, or downloading an appropriate version for an older IDE. Or giving a warning on including something out of scope, or chaining extensions out of scope. Or have a release tool add/suggest that the target version be included. But even if it wasn’t parsed by anything, it could be helpful just to be informative.

I don’t think that information should be parsed out of the extension. That implies a mess of updating old extensions. If you ever get it wrong, you have to release a new version of the old version of the extension. You’re trying to invent a declaration which will be compatible with all older and newer versions of the compiler, which is pretty much a compatibility nightmare.

(Starting with the fact that all pre-2020 versions of Inform will not recognize those declarations, so how can you put them in at all?)

It would help though if extensions could more reliably specify their dependency on the Standard Rules/compiler features. If the version numbers were all semver and an extension could say “I need something compatible with version 2.1.5 of the standard rules” then the compiler would be able to easily detect potential problems. Now an extension might still work when the standard rules bump to semver major 3.0, but that’s something that requires manual investigation.

Is it currently a requirement that an extension file name match its title? It seems like right now the public library unpublished older versions into an archive folder: /authorname/archive/extensionname_oldversionno.i7x but if you have distinguishing version information on multiple copies (as many as you want) then you can list them all together in an author folder but only offer the latest version for download from the Public Library – the file names can be informative or even structured but they don’t need to be as long as they are unique.

Re:semver – Do the standard rules / compiler advance together? If they are released together from one repo then semver could be retroactively attached to specific commit numbers.

Do the standard rules / compiler advance together?

To date they have, and every new version has been incompatible with the previous version. So semver would always have been in whole numbers.

(This may change in the open-source era if people start doing bug fixes on released versions.)

Regarding max and version metadata for an IDE library – for example, the Processing IDE (PDE) accesses a central listing of contributed libraries and tools for that exist in multiple versions and have updates – but having varying compatibility with Processing 2, 3, 3.4 / 3.5 etc.

Contributions Manager (analogous to the Inform “Public Library” tab) consults a list of properties .txt files to build its listings and indicate which resources are available / recommended for a given version of the software.

So, for the Rosetta Examples for Processing library, there is a simple INI-style metadata file, rosetta_examples_p5.txt:

and this txt file URL silently corresponds (same name, same path) to a library file with a different extension, rosetta_examples_p5.zip (the equivalent of the .i7x).

If the author doesn’t specify a max Processing version (typical), then it is 0 – if at some later point Processing 4 comes out and the example set doesn’t work anymore, that max can be added without changing the library release number.

Also note in this example, no min is specified – because it is an example set. Some of the material works with Processing 1, 2, and 3, some with 2 & 3, and some only with 3, so the responsibility is on the user. But most library authors do specify a min because they don’t want support requests from something that won’t work.

I’m trying to get a quick understanding of how Inform 7 Extensions are available on the web app and through github.

Me too. On github I see a whole lot of things that are time-stamped “2 months ago,” but this clearly refers to the date on which they were added to github, ported from the Public Library, not the date on which the Extension was last updated. There are a lot of Extensions on github that are not in my I7 IDE (though the IDE thinks it has everything current). Conversely, there are a few things in my local I7 that are not on github – including my own “Spellcasting” Extension.

How exactly would one go about making sure that one has an up-to-date I7 installation, including Extensions? I mean, other than running WinMerge to find out if two versions of a file are identical, and doing that for a whole bushel of files…

Speaking as the person who merged the then-current I7 Public Library to the github 2 months ago, the intent is that a “fully up to date system” simply uses the release zip and/or git checkout as your Extensions folder, as is documented in the repo’s readme. You can then completely ignore the Public Library listing, except perhaps as a convenient categorised way to find (but not install) extensions of interest.

This includes all extensions contributed on GitHub plus the latest versions of everything in the Public Library (plus some contributed patches to those). This is not all extensions ever created – the Public Library occasionally dropped extensions when they didn’t compile for the newer versions of Inform, or didn’t meet certain standards such as adopting response text. But it hopefully is every extension currently expected to work (plus some experimental ones).

If you know of specific extensions that you think ought to be included and aren’t currently in there, you’re welcome to contribute them yourself via a pull request (or better: to encourage their original author to do so, giving them a chance to update them if they so desire).

as is documented in the repo’s readme

This detail may be worth adding to the readme.