Recently found this pdf which goes into details of how to use interlz5 to create Apple II diskette images to run your z5 compiled games on Apple II emulators (and probably real systems if you have a way to write the diskette images).

It talks about z3 to Apple for most of the document, but near the end, it talks about the interlz5 tool made in 2016.

If nothing else, it’ll be nice to have this info and the links here, for anyone else that feels like playing their new inform game on an Apple IIc.

Skeleton of a game running in LinApple: 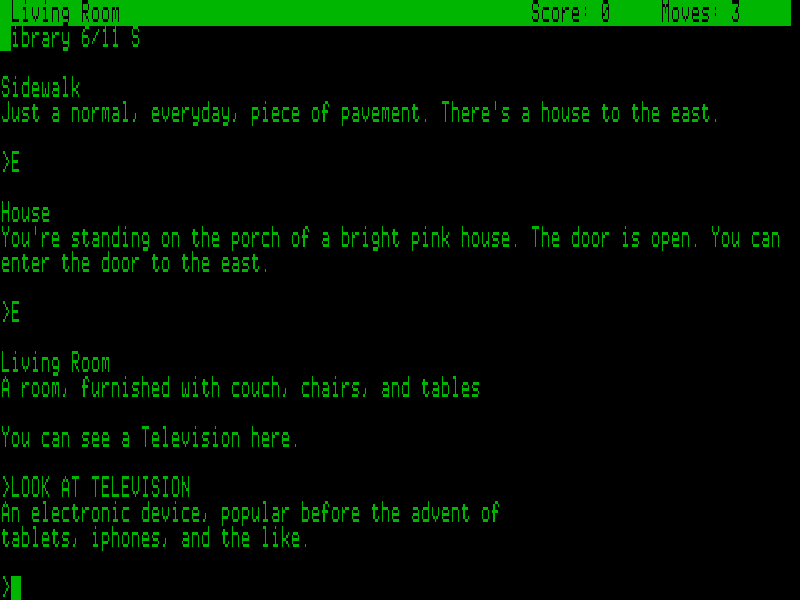 Oh, nifty! I own an Apple //e and I’d love to get z5 games working on it natively. Thanks for finding this!

Further information: Per this discussion it seems like there’s an ongoing issue with the terps - Infocom released several versions of their Apple II z5 interpreter, and it’s tricky to get any single one of them working with all of their games (let alone Inform games). But this code does the heavy lifting to fit >140kb z5 games on floppies, and a notable Apple II hacker (qkumba) is apparently getting close to finishing a universal z-machine for ProDOS, so exciting stuff!

Glad someone else digs it

Thanks for the extra link and tips.

I’ve tried a couple simple-ish z5 games and they seem pretty okay. Formatting on some longer text paragraphs can get chopped up a little and it is slow… Maybe if I compile with minform it’ll be faster…

Ooo! And I haven’t tested it yet, but on this page, there’s a program that makes Commodore 64 diskette images from inform games:

Good news: It compiles under Linux and runs.

Good news, it even produces the diskette images.

Some years ago I tried compiling Inform 7 games and running the results on a C64 interpreter on my Mac. The tiniest games will work, but anything more ambitious will crash, even if it fits in the space.

Curses (Inform 5 I think) ran nicely though, at least for a few turns, before it too crashed.

Here’s the old thread from some years ago about Inform 7 and earlier Curses on the C64:

Some years ago I tried compiling Inform 7 games and running the results on a C64 interpreter on my Mac. The tiniest games will work, but anything more ambitious will crash, even if it fits in the space.

Curses (Inform 5 I think) ran nicely though, at least for a few turns, before it too crashed.

Yeah, inform 7 games are too much. Inform 6 games seem to work.

More on this paper, including the video from Kansasfest, in this thread: https://intfiction.org/t/an-apple-ii-build-chain-for-inform/11571/1

4am and qkumba have successfully gotten Z-Machine version 1-5 games running on the Apple II. The main products are On Beyond Z-Machine!, a unified terp framework, and Pitch Dark, a front-end for browsing and playing games. Pitch Dark and the z4/z5 terps run from a hard disk, which limits the options for real hardware, but my understanding is that the z1, z2, and z3 terps can run from a floppy. (I have not tested this yet.)

The downside is that everything is based on patched Infocom terps, a barrier for those squeamish about copyright. (This is par for the course with 4am, though, who has single-handedly cracked the copy protection on something like 2,000 pieces of Apple II software in the name of digital preservation.)

I am not sure what this forum’s policies are on linking to pirated content, but the major releases can easily be found on Google: