Look, rediscovering IF a couple years ago was a real pleasure for me and having an community to celebrate it with meant more than you know.

But I am sick and tired of the censorship and the elitist attitude from the gatekeepers here, so I am fucking done.

I fully realize this isn’t my website (or archive, etc), and I understand that many folks have spent years (if not decades) preserving and protecting IF, so it’s their prerogative to wall off this garden as they see fit, so nobody needs my input.

Nonetheless, I think it’s a bit sad because somewhere along the way, something got lost in the gatekeepers of IF - that wild spark and buccaneering spirit that the original Zork crew and Infocom folks and BBS programmers et al had, and I’m truly sorry to see it smothered to death on a daily basis in the name of playing it “safe.”

Thanks for letting me enter your competitions and thanks to all the reviewers and beta testers who gave such authentic and meaningful feedback. Writing and coding IF games was a real pleasure for me and a heck of a nice break from my stressful day job, but it’s come time for me to put away childish things.

Good luck to you all and godspeed.

I agree. The things I’ve seen go down here definitely bring the term “gatekeeping” to mind. Too bad it’s the only hole to visit for IF.

I’m thoroughly confused. Maybe I haven’t been reading the same threads as you, but I haven’t seen this.

First of all, get your posts in on this topic now before the mods lock it because it’s the type of topic that makes them uncomfortable. After all, why should we have any real discussion about what goes on around here when we can just sweep it under the rug and hope that no one notices the elitist attitude on this board.

Second, the IFComp is arranged so that one woman and one woman only has the power to ban whomever she wants with no appeal or even any discussion with the author about it. And no one in the organization sees a problem with this. That’s the problem itself. This is a woman who barely even visits this board. She drops in maybe every four months.

If that’s not elitist and gatekeeping, then I’m Bea Arthur.

(But what do I know? I didn’t go to college in Massachusettes.)

Your name and topic remind of Marshal Tenner Winter, who has been on this board a few times before with different usernames. I wonder if you guys would like each other, he had some cool games but I just can’t agree with his position on the IFComp organizer.

Best wishes Sam. For what it’s worth, I’d just started playing Star Tripper on mobile, and was disappointed when I tried to start it on desktop and saw that it was gone! I was having great fun with what I saw.

Thanks for partaking. Stay safe in PMR.

Sorry, but I’m also wondering what Sam Ursu was referring to. The mods here are doing ok. Sometimes they intervene too quickly, sometimes too late. Such is reality. Overall though, this place is civil and agreeable.

Deleted post because I can’t figure out how to reply to the correct person even after doing it like a million times.

I have no intention of locking this thread, and I didn’t really want to post on it because I don’t want it to look like I’m shutting down criticism. If people have issues with how the forum is run, better to let the community discuss them than to just pretend nothing is wrong. (We really do want to know what issues people have so we can work on improving them.)

But I do want to clarify, we (the moderators of this forum) don’t run the IFComp. Our general policy is that anyone can run a competition with whatever rules they want*. Both the comp and the forum are funded by the IF Technology Foundation, but other than that we’re separate entities. We have no authority over the IFComp rules or their enforcement.

* Well, with a couple exceptions, because we’d be uncomfortable hosting a “no black people allowed” or “games glorifying child pornography” competition. But if you want to make a competition solely for the type of game you like, write your own set of rules, and ban anyone who breaks them purely at your own whims and discretion with no appeals process? Go for it. You wouldn’t be the first.

Sorry, but I’m also wondering what Sam Ursu was referring to. The mods here are doing ok. Sometimes they intervene too quickly, sometimes too late. Such is reality. Overall though, this place is civil and agreeable.

Same here. I find this place to be a little oasis of civility in the vast sewer of internet hate.

If you’d like the context for Sam’s departure, it appears to be at least in part due to the discussion in the brief Mastodon thread. I believe that discussion speaks for itself.

So your answer to the complaint is for me to make my own competition and run it the way IFComp is run? That’s seriously your answer?

A reviewer can say they had a run-in with an author and Jacq bans that author with no mediation, discussion, chance for appeal, nothing.

And you’re reply is “go make your own comp”.

Very good, Dan, let’s leave it at that. Says it all.

That was my thought too, but I hadn’t seen that he got flagged.

This isn’t a very useful post. Just throwing bombs with no context informs no one.
It sounds like someone didn’t like something IF-related you did or said, and you regard their reaction as "censorship’ and “gatekeeping”. One is left wondering what happened.
I don’t think the “wild spark and buccaneering spirit” has been “smothered to death”. Just about the only thing we have rules against around here is being mean to people.

Sam, if you’re still lurking on the thread, I’m sorry to see you go – I usually enjoyed your sometimes-contrarian contributions, even if you were occasionally more personally confrontational than was a fit for how this community rolls. But I can understand how having to tone down that kind of thing in order to participate could feel frustrating so I guess it’s for the best.

This line of complaint I don’t really get, though. Sure, you can label any form of moderation “gatekeeping”, but this applies to the lack of moderation just as forcefully – and actually usually more forcefully. I’ve seen a lot of posts over the last couple of years from newcomers here favorably impressed by how welcoming it is, which has helped lead to them participating in the community and making more games; certainly it’s a higher number than the number of people I’ve seen say they’re turned off by the moderation preventing conversation getting too edgy. Heck, I’ve been adjacent to various forms of the IF community for 20 years now, and I personally feel like right now it’s the most open and friendly it’s ever been – there’s a reason I’m participating more now than I did in the early aughts, and it’s not all down to the pandemic!

Beyond that, given that IF is uh, not exactly a dominant cultural force right now, this seems like the right orientation to me, beyond the fact that it’s the one that the community as a whole has chosen (pretty much every moderation decision I’ve seen in the last couple years has been in response to multiple user flags, and I’ve rarely seen much if any disagreement on any of those calls).

As to the IF Comp stuff, I read Daniel as saying that complaints about how it’s run don’t really have anything to do with complaints about how this board is moderated, since they’re separate projects run by separate people. In terms of starting new competitions, we actually have seen recent examples of that, with ParserComp being revived by one person (shoutout to @Adam_S!) last year and turning into a really solid, big event, so it’s not that outlandish a suggestion.

The comp organizers regularly visit this board. (Well, not Jacq, of course). So complaining about it here makes sense. I never accused the mods of this board of running the IFComp.
ffs

But I am sick and tired of the censorship and the elitist attitude from the gatekeepers here, so I am fucking done.

For reference @Sam_Ursu had a post flagged that several people responded to which contained a snarky comment aimed at a specific person. The post was hidden by community flags and Sam was privately asked to edit and change or remove three words which would automatically unhide it again. That’s the normal process.

As y’all know, the Code of Conduct we’ve established requires that all discussion on this forum remains civil. We understand people forget themselves sometimes and get heated, and that’s why there’s a procedure for the community to flag posts that need to be reviewed. Usually we do this review with the member in private. This is for the offending member’s privacy while the situation is hashed out, and to prevent the entire community from piling on them. The Staff of this forum are all experienced moderators and we expect to be able hear people out and that’s best done in a non-public thread.

Our goal is to prevent people from being unkind to others since this is a community that welcomes everyone. If we allow others in the tent who purposefully or mistakenly drive others away, this is a problem that we can correct.

Sometimes when people slip up, this requires that we ask them to edit a post. People say things inadvertently that hurt other people’s feelings and that’s fine - that’s the purpose of moderation so we can coach people that they’re doing it and hopefully they’ll change those behaviors to get along here. If members are resistant to this and become a problem then we will silence or ban them.

Sam knows this. He’s been the subject of previous moderation sessions in the past. He even takes care to spoiler-blur curse words he uses, despite there being no specific restriction on language here, except when it is used to target or bully someone else. (All general language is allowed except for a few very derogatory terms and slurs that nobody really needs to use in friendly conversation which are banned at the system level.)

With certain personalities it often reduces to “This is the way I am and the way I talk, so people should get used to it; I’m a blunt-talking buccaneer/renegade who says what they want!” That’s fine if you are that way in real life and other communities, but if you can’t exist here without making people angry, we certainly can moderate you, silence you temporarily or permanently, or remove you from the forum. Signing up for an account here implies you agree to our Code of Conduct while participating here - and off-site in extreme cases. If you can’t deal with that, there are other communities who will welcome you with that attitude. 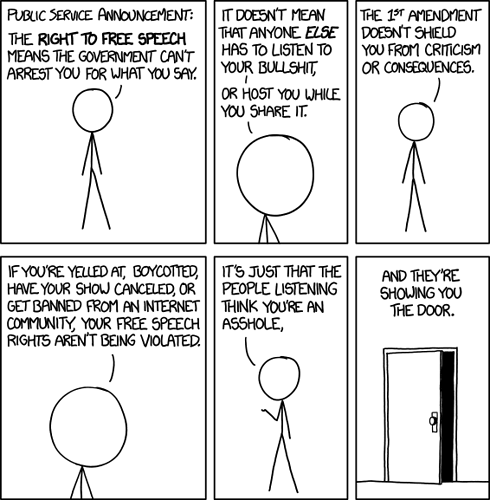