I’ve emerged from the caves back into the sunlight, ready to tell you about by first IFDB Spelunking adventure! The idea is to use the “10 Random Games” link to generate a set of 10 random games, and then make a good-faith effort to play them. If you can’t play them, or they’re too awful to play them through, that’s okay. But this time I managed to finish all these ten games. The concept comes from Joey Jones; he and Sam Ashwell actually made games documenting their spelunking expeditions. That’s too much work for me; instead, I’ll write a quick report here! (And I wrote IFDB reviews too.)

If you want to use this topic to announce and/or report on your own spelunking expeditions, feel free to do so. 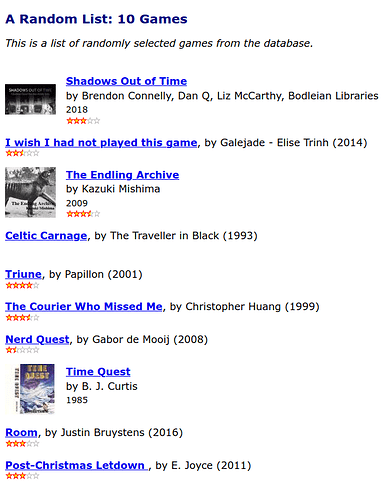 And here’s what I found, ordered from worst to best:

I really enjoyed my spelunking and am tempted to start on a new expedition very soon!

I couldn’t resist and already made a new list. I’ve already played a (long) part of the first game, and the entirety of the second. Never heard of any of the others. 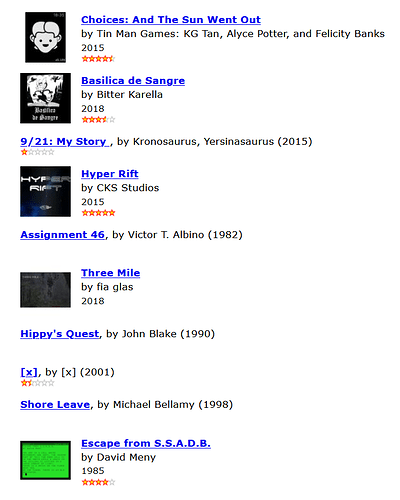 Cool project. I went over and read your IFDB reviews of the games too, which were very good and thorough!

Yes, I enjoyed reading the reviews, too!

Victor, were you surprised that two of your three favorite games from the list are old Spectrum games? And do you plan to play other games by Papillon, the author of your favorite game?

I really liked your review of Triune. Much attention to the good stuff, which makes me want to play it. Also a heads-up for the lesser stuff, so I know what to expect.

Thanks all! I still have to write an IFDB review of Time Quest, but will definitely do so.

Eriorg, yes, I was definitely surprised at enjoying the Spectrum games as much as I did. WIthout the spelunking challenge, I would probably have never even tried them. (In a different way, the same is true for Triune.) One of the things I’ve learned during this expedition is how to play and enjoy Quill/Spectrum games, and that’s really nice.

There are games you can play right on The Internet Archive website through an emulator but they are really slow. (I know I’m spoiled. They’re probably lightning speed compared to the real thing, but still…)

An emulator (such as Fuse) is your best bet because of stability and the option to make instant snapshots of your progress but if you’re looking to play online then many Spectrum games already have a QAOP (online emulator, Qaop – ZX Spectrum emulator ) link on their Spectrum Computing pages https://spectrumcomputing.co.uk/ The online emulator doesn’t provide the smoothest experience but it is pretty cool.

ZX Spectrum games are my area of interest so I’m always very happy to help out anyone who is looking for assistance with them.

on their Spectrum Computing pages https://spectrumcomputing.co.uk/

Now look what you’ve done! You’ve just opened up a whole new rabbit hole for me to fall into! 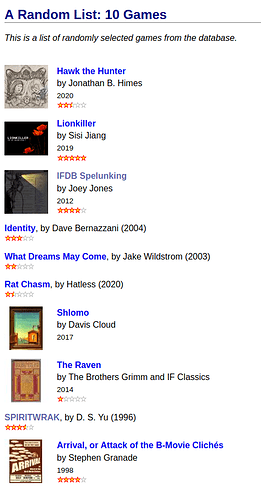 Yeah, I think that’s what inspired @VictorGijsbers. Funny that you actually got it by random!

The concept comes from Joey Jones; he and Sam Ashwell actually made games documenting their spelunking expeditions. That’s too much work for me; instead, I’ll write a quick report here! (And I wrote IFDB reviews too.)

I used the JSSpeccy link over at Spectrum Computing to play the games online. (The other online emulator, QAOP, didn’t work for me – it throws network errors.) Typing is a bit slow, but this only bothered me when I was typing the same letter twice in a row. With Celtic Carnage I could save and load using ‘ramsave’ and ‘ramload’. With Time Quest I didn’t manage to save and load (“load” gave me a fatal error), but it wasn’t too bad for that particular game. Possibly this works better with a local emulator.

Nice! That’s the game that inspired me, and it’s actually pretty fun. Possibly even more so in the context of a spelunking expedition! Lionkiller was one of the favourite 2019 games of Emily Short. Haven’t played it myself. I don’t think I’ve played any of the others, though Stephen Granade is a very talented author so that one might be fun.

The review for Time Quest is up!

She now goes by Hanako Games and is apparently fairly famous in the indie visual novel scene: 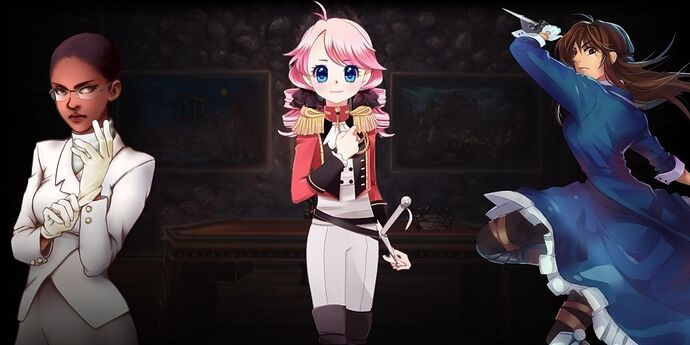 Hanako Games Visual Novels Are the Future of the Genre

Hanako Games has created the most memorable western visual novels and redefined the genre with titles like Black Closet, Long Live the Queen and more.

I used the JSSpeccy link over at Spectrum Computing to play the games online.

I just spent at least fifteen minutes looking through the Spectrum Computing website and I couldn’t find a JSSpeccy link for the life of me. I was just contemplating asking where this bloody link was here, thereby risking looking the fool for missing an enormous purple “Play Online!” button in the middle of my screen when my eye dropped onto a teeny-tiny link.

Anyone else interested in the JSSpeccy or QAOP online emulator links on the Spectrum Computing site: They’re on the [game you want to play]'s webpage under “Main File Downloads” in a second column from the left. (With the little joystick next to them.)

Unfortunately, this game no longer exists at the linked website. It’s also not on the IF Archive; at least I haven’t found it. As an intrepid spelunker, I do want to do that little extra to find out if it’s still available… so in case anyone here knows anything about either the game or the author, please let me know!

Edit: Possibly I’ve found the author on reddit; I’ll be waiting to see if they reply to me!

I’m pleased to report that I managed to contact Kronosaurus and have been given a copy of 9/21: My Story (for my personal perusal only – it’s a work they made when young and don’t want out in the open any longer). I’ve also managed to get an Atari game, an MS-DOS game and a Spectrum emulator running. Spelunking takes one to unexpected places!

You’re really thorough in your spelunking. I already skipped two entries, because I can’t find any files to download(I tried IF Archive and textadventures.co.uk). One of these clearly wasn’t a game, but a copy of traditional fiction converted to Quest. I also decided to skip commercial games for now. Other than that, I finished third game last evening and the next one to play is the game that started it all - IFDB Spelunking.

I get this feeling a lot in the second hand bookstore I go about once a week. I’ll notice a a title or an author name and don’t buy the book. In the weeks after that, it feels like that particular book is growing on me until I finally take it with me. 9 chances out of ten it’s a great find.
And now Basilica de Sangre shows up on your Random List.
I’ve been feeling this way for a while now about that game. Every time I notice the title or the author’s name it gets more tempting.

Good luck in the caves!

There’s no right or wrong way to spelunk, of course! If one is having fun and trying some games one wouldn’t otherwise try, I’d call it a success.

I’ve played an reviewed 9/21: My Story, which I actually found surprisingly moving. I don’t think I would have appreciated it nearly as much if I hadn’t had to contact the author and they had explained the context of the game to me; so there’s some unexpected benefits here.

Now, to pick all of your brains, one of my games is this: [x]. This has every appearance of not being a real game… except that it has three ratings?! Does anyone have any ideas about this?