I developed a website to make interactive stories with no programming experience!

Hey guys, I’m Sean and I wanted to share a project I have been working on (fablement.com). Fablement is an interactive story platform with a drag and drop creator so no programming knowledge required. Usually this means having to give up a lot of functionality, but I am trying to maintain as much control to the author as possible. Some features we have is:

Complex variable calculations and check for variables and routing

Workshop (share portion of your stories with other creators)

Read how you want (change the colors/fonts)

I am a solo developer and this has been my passion project for more than 2 years now. I would love to hear your thoughts. Oh and its completely free! Thanks for checking this post out and I hope you try it out! I have absolutely loved working with my users and bouncing ideas off of each other. I also have an about page and made a video that I am particularly proud of haha. So check it out here! 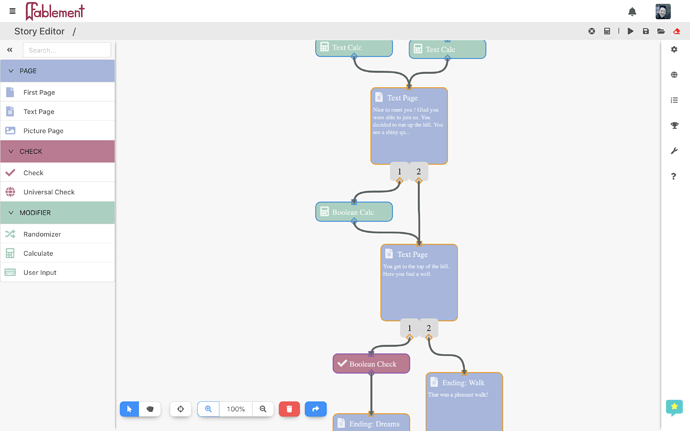 this looks great! currently playing around with it. is there a public roadmap for planned features?

I will be creating a roadmap on our discord! But you are not the first person to ask about this so creating a dedicated page seems like a good idea too. Thanks for trying it out!

Congratulations on developing your IF platform! I wish you the best of luck.

The color of the quotations is #aaa; the background color is #fff white. This isn’t enough contrast. (Google’s Lighthouse penalizes this as an accessibility issue.)

image960×338 28.2 KB
I recommend using a thicker left border (it’s currently 2px; make it at least 5px, IMO) with a distinctive color, and leaving the text in black.

While you’re at it, using a white #fff background with black #000 foreground text isn’t great typography in any case. Ian Millington wrote a delightful introduction to easy CSS typography which I’ve reproduced on Github. His example uses an off-white background color #f7f4f1 and a text foreground color of #543. I’ve had good luck with rgba(0,0,0,.85), black with 15% transparency.

Also, since I’m here, I might as well copy and paste my canned advice for new IF platforms:

Most people choose an IF platform by playing a great game and saying, “I really like this game, and I would like to make another game just like it. How did the author(s) make it?” Admirers don’t seem to directly care about any of the details of the system, except that if it’s too hard for them to learn the system and finish a game, that’s a major factor in achieving true popularity.

So, when IF platforms successfully take off, they require an admirable story (not just a technology demo) to attract new authors. Historically, the first “admirable” story for each now-successful IF platform was typically either written by the platform authors themselves, or directly funded by them. (Twine’s first admirable story by Anna Anthropy is the only exception I’m aware of.)

I think you’ll either need to write something great or hire a great writer (preferably paid in advance) to launch your platform effectively.

Writing the first good game yourself is also important because there are already competitive choice-based IF platforms out there, including Twine, Ink, Inklewriter, Raconteur, and our platform, ChoiceScript.

Your platform is also in competition with authors who just want to write their own platform, like you did. Developing a work of choice-based IF is often a novice programmer’s second program, literally right after “hello world.” It’s one of the recommended projects in JavaScript for Kids for Dummies. (Chapter 16: Choose Your Own Adventure)

All in all, your website looks great, and I believe you can build the community you want to build if you’re willing to put in the work/money required to write a great game.

Thanks for your wonderful insight Dan! It is quite rare to get both a programming and business suggestion from one person. I love your work with choicescript and appreciate you taking your time to look at my site.