How to make characters for a MUD

So I’ve been thinking of ideas, and I’ve wanted to make a MUD. The issue is though is that I don’t exactly know how to make multiple characters. I want to make a playable character, but I don’t want a player with an NPC. How’d I do that?

Summary: How do I restrict player choices to only a small set for multiplayer?

I’ve been toying with this myself in Inform 7, and it’s a pickle. If I’m understanding your question correctly, I think the answer is to make two or more totally separate Inform games that aren’t actually linked. The first challenge then is how to write the games so that they “talk” to each other when they aren’t linked. The second challenge is considering how the players will communicate with each other, and what kind of information they’ll transmit to each other to keep the game rolling for all players. Will it be just information, like a code for a safe? Will it be transmission of useful objects?
I wrote a short bare-bones 2-player Inform game that I may or may not go back to, as I’m not sure how successful it’s possible to be at tackling those challenges in a parser game.

If you’re creating a MUD (multi-user dungeon) that means multiple people will be in the world at the same time. You don’t create those characters. They are set up by each individual player.

The world may still have NPCs (non-player characters) which are your quest-givers, shopkeepers, characters that have to be there and are not being played by live players but can be interacted with.

It’s possible to limit “choices” and reduce what a player can do in Inform 7 with a lot of tricky programming, but at that point I’d ask why you want to use Inform 7 in the first place? You can use GUNCHO to make a multiplayer I7 game, but the point of that is to have the parser like normal.

If you want to make a classic MUD with limited choices as you might be thinking of, you might want to look into another engine that is set up for this like CoffeeMUD or WrittenRealms.

I looked into your idea, and it seemed like it’d work great… if it weren’t for Guncho not letting me get into the control panel. The wiki is gone too, so is Guncho shut down or…?

I am sorry! I did not realize those links didn’t go anywhere - it’s been a while since I researched Guncho. Someone else might have more updated info.

Summoning @vaporware (Guncho’s creator) and @Dizzydonut (who is one of the persons with the most recent experience playing with Guncho, I think) 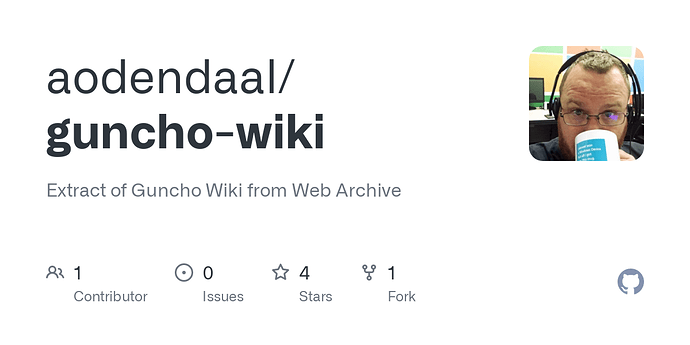 Extract of Guncho Wiki from Web Archive. Contribute to aodendaal/guncho-wiki development by creating an account on GitHub.

Just to let those interested in Guncho know: I’ve cannibalised the Guncho Wiki and used it as a source for a new realm called “Guncho Helpworld.” The reasoning behind this is that being a total newbie at MUDs when I started looking at Guncho, having the help wiki down was a major obstacle. So by creating this realm I’m attempting to make the Guncho site self-documenting. It’s got to be the most boring world ever: simply a single room with pages from the wiki made over into “posters” in an exhib…

Having trouble with Guncho Technical Development

I was messing around with Guncho myself a little while ago, so I know a little bit, but not much! Guncho uses an older version of Inform than the current one, (version 5T18) so make sure that you’re using the reference docs for that version. The Guncho help wiki seems to be permanently down, but I’ve put up a new realm on Guncho, called “Guncho helpworld” with all of the wiki contents I could find. I’ve left the code for that realm public so that other people can not only read the source code…

I’m afraid the link to Guncho that I have only gets me a “403 Forbidden” response. So I think Guncho may have succumbed to web rot.

I recently upgraded the OS on Guncho’s server – a risky move for something that’s been running mostly untouched for 10+ years – and it seems I overlooked some changes to the web server configuration. Let me look into it.

The control panel should be fixed now. Sorry about that.