How to delete/edit the "Welcome" bit?

Whenever I start my game, it always says,

Anybody know how to delete that, or at least edit it to say something different? Thanks!

Is your game named “Welcome” (Does your source code start with something like "Welcome" by ThisAdamGuy)? That part is usually the story title, I think?

You can change the bibliographic data or replace the banner text completely, according to the manual.

You can remove the display of the banner text (which is what that is) with the following:

You can change the contents of the banner text with this:

The second rule won’t do anything if you use the first rule, btw.

Thank you both! I tried looking it up, but I couldn’t find anything because I didn’t even know what it was called, haha.

The example under 18.37 points out that the polite thing to do is to leave the banner text in somehow, to recognize the developers of Inform. You shouldn’t feel bad about having an arcane “Inform 7 build 6M62 (I6/v6.33 lib 6/12N) SD” message at the start of your game. It’s like the IATSE logo in the credits of a TV show.

I did feel obligated leave it out completely on one occasion, because the game was in a puzzle-solving context where the “Inform 7 build 6M62 (I6/v6.33 lib 6/12N) SD” part might look like a clue, but I restored the banner text in a post-event release.

In another game I deferred the banner text to the end of the game for dramatic effect. I think this was okay because it was a pretty short game.

In a few situations I’ve had cause to “fake” the banner text in one way or another, but I’m sure nobody has noticed…

Removing the banner text, or changing it, in the manner I described has no effect on the information provided by the VERSION command, so the information would still be available. You can’t easily change the response to VERSION, which comes from I6. You have to unlist the relevant rule and write a new carry out/report rule for the requesting the story file version action.

Just to reiterate, the first line of the banner is the story title and the second line is the headline and author. You can change them like this:

I just wanted to add that technically it is part of the licence conditions that the banner (or something equivalent) is shown to the player:

A story file produced with the Inform system belongs to whoever wrote it and may be sold for profit if so desired, without the need for royalty payment, provided that it prints a game banner conforming to the standard library’s banner at an early stage in play: in particular, this banner must contain the information that the story file was compiled by Inform, and the version numbers of compiler and library used.

The most straightforward interpretation of this is surely that it should be shown automatically (though possibly deferred), not only displayed on explicit request by the player. (BTW, I’d guess that among casual players the version command is virtually unknown.)

Though admittedly, the documentation with its characteristic English restraint and politeness

does not state this directly. In addition to the passage mentioned by Ryan, the docs say that the banner “must appear”, but qualify that with “It is traditional”, and say that the banner is sufficient, without mentioning whether it is also necessary:

It is traditional that the banner must appear eventually (and one of the few requirements of the Inform licence is that the author acknowledge Inform somewhere, for which the banner is sufficient)

Here is a previous discussion of the same issue with banner / licensing:

That paragraph beginning “A story file produced with the Inform system belongs” appears on the copyright page of the Inform 6 Designers Manual (2001), and I believe it is called “the Inform License” – I know it was long bundled with Inform 6 as license.txt. Oddly there is no such license document on the Mac side of Inform 7 (that I can find) – not in the official download DMG, or in Inform.app, or project folders, or exported works, or available for lookup through the documentation search bar. Inform.app does contain a copy of the RegexKitLite License.rtf, but that is it. The two places where the word “license” appears on inform7.com are a discussion of licensing extensions and the licensing of recipes in the recipe book.

The Inform7 Wikipedia Page says “Proprietary but freely redistributable or Artistic License 2.0” – but I also couldn’t find a copy of that license included anywhere with Inform 7 either. The “Opening Inform” talk says that it will be used for a future release. The Wikipedia page may just be referring to the fact that the bundled Inform 6 core is available under that license – or that Wikipedia editors may have been getting ahead of themselves.

Anyway, hard to suss out.

That paragraph beginning “A story file produced with the Inform system belongs” appears on the copyright page of the Inform 6 Designers Manual (2001), and I believe it is called “the Inform License” – I know it was long bundled with Inform 6 as license.txt. Oddly there is no such license document on the Mac side of Inform 7 (that I can find)

My understanding is that the license that has the banner requirement is the license for the Natural Inform compiler used in the Inform7 IDE. You may be able to locate it on the Inform 7 IDE by going to Help->License. After it opens the general licensing information, scroll down and in the text you should find a link to the Inform license, clicking it opens the information specifying the banner requirement: 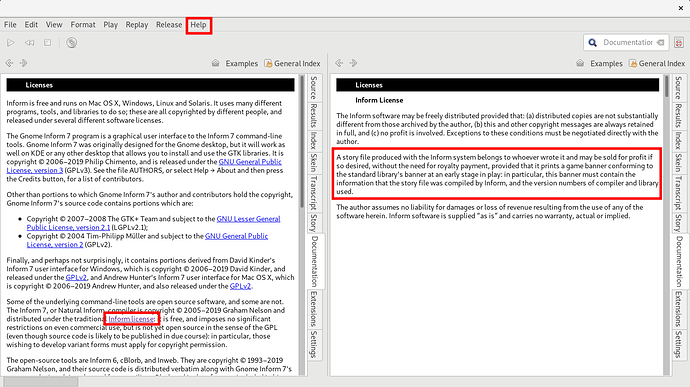 There is no License menu option, and it doesn’t appear under any of the sub options or the searchbar.

But this may be wandering far off topic for the OP.

I am on Linux with a 6M62 install. I can say it is not easy to find searching the documentation; however, if you can browse to the documentation directory on your Mac (and it is same as Linux documentation) then there will be a licenses folder with a inform.html file in it. Possibly searching your macs filesystem for inform.html might track it down if it is indeed in the distro.

and it is same as Linux documentation

It is not the same; this is my only point. There are no such directories or files.

The closest is Inform.app > Contents > Resources > Internal > Documentation, which is empty. There are no folders named licenses and no files named inform.html anywhere in the Mac distribution build of 6M62 that are exposed to the file system. The actual app documentation is in > Content > Resources > English.lproj; none of these files appear to contain licenses. Inform also creates some assets in /Users/yourusername/Library/Inform/Documentation. The license is not there either – (nor is the built-in app documentation there, it is in the .app).

It seems like an odd oversight in the Mac IDE distribution as it is a license for a pretty fundamental component of the Inform7 IDE. I do not have a mac myself to investigate otherwise I would look further to confirm your finding

I looked around the Mac app and I couldn’t find them either. (I checked a couple of older versions of the Mac IDE as well, going back to 5Z71.)

It looks like the license doc just never got included in the Mac release.

I filed a bug report about this: http://inform7.com/mantis/view.php?id=2120

I did some digging and had a few exchanges with @ptomato and @GrahamNelson. It appears that the inform suite of tools will be undergoing a licensing change overall and the banner requirement is dropped.

Here is a quote regarding the banner text:

Here is a quote regarding future licensing changes: