Puzzle design turned out to be a little tougher than I thought it would be, so I did some research …

Dev.Mag did some interviews with puzzle-game designers. The introduction to the series said:

Computers allow us to enrich puzzles with compelling narrative. … On a computer, it is easier to string puzzles together into a unified, structured experience, making it possible to train players, to give them a sense of progression, and to award players by revealing more content.

The article then divides puzzle games into two general categories:

Tiffany Manuel at Medium created some infographics from puzzle presentations at a developer’s conference. 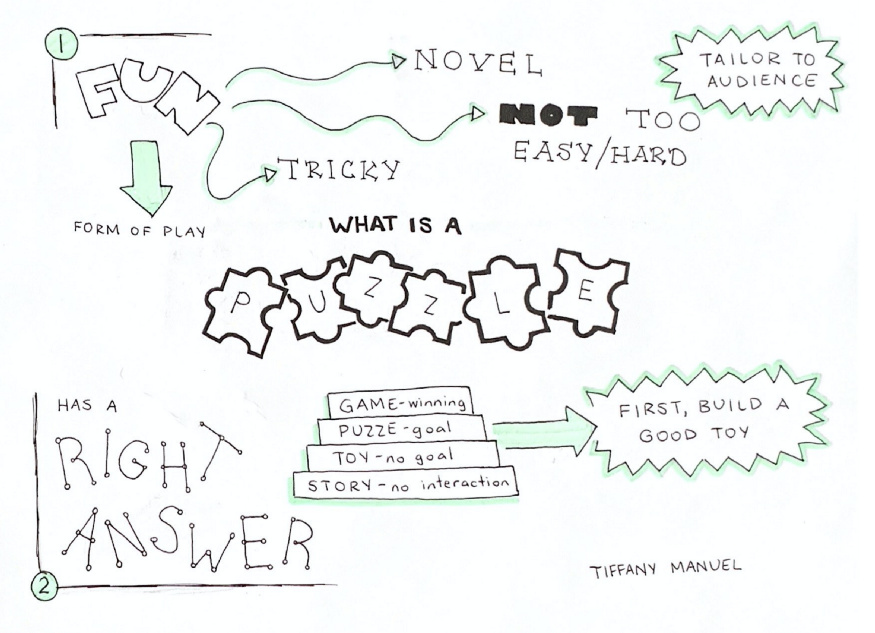 Illustrates a principle of puzzle design given by Scott Kim: Start with a toy, then give it a goal and a right answer. 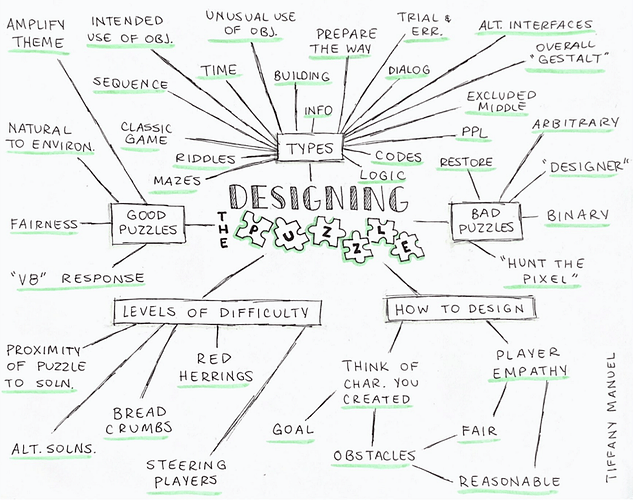 Illustrates the principles of puzzle design given by Bill Bates. There’s a lot of stuff there, but look at the puzzle types:

How many text-adventure games try the homogeneous approach, where game-play focuses on one puzzle type? I know of “Counterfeit Monkey,” which seems to focus on code-breaking/word-game puzzles, but I’m sure there are others out there.

I really need to steal some ideas from you guys, so I can design some clever puzzles!

Adventure games often have a degree of homogenous (or “systemic”) puzzle design. A particular mechanic gets reused in many different contexts, perhaps in qualitatively different ways, but you have to understand the consistency of the pattern.

For example, in Loom (the graphical adventure), we have the notion of reversing spells (which gets applied to every spell). Then, at the end, the OPEN spell gets re-used on an unexpected target (the entire world).

On the other side, there are are purely systemic puzzles like Sokoban – one block-pushing mechanic, lots of levels. But then there are games which start with that mechanic and start contextually varying it to work in new and surprising ways. Baba Is You is the obvious example there.

I wrote an essay about puzzle design a few years ago and I thought it had been published but can’t find it anywhere, so I decided to repost it.

Here’s a link to it:

What makes a 'best puzzle'? IF Reviews and Essays

What makes a ‘Best Puzzle’? Every year, public voters award the XYZZY Best Individual Puzzle award to one puzzle in one game. These are the puzzles that most captured the community’s fancy in some way, whether through complexity, inventiveness, or even emotion. Of all the XYZZY, the Best Individual Puzzle award seemed at first to me the most like a grab-bag of random games, with little connection between different winners. However, I was determined to find out what, if anything, they had in co…

For other homogeneous puzzles, there’s 15 Minutes by Ade Mctavish (entirely based around 1 time puzzle), Suveh Nux (which is a great 1-room game about learning a magic language), Captain Verdeterre’s Plunder and Sugarlawn (timed optimization puzzles), pretty much all of Andrew Schultz’s wordplay games (Shuffling Around and Threediopolis are my favorites), Gun Mute (focusing on one-on-one gunfights). Those are the ones I can think of off the top of my head!

I liked your essay. It looks like a lot of the “Best Puzzle” winners were largely homogeneous.

The last part, which describes the qualities of a good puzzle, echoes part of the Bob Bates infographic above, which also says that a good puzzle is …

Yeah, I think your research has been very effective. I look forward to seeing the puzzles you come up with!