Can a red herring be elegant? (with Cragne Manor example)

Today I have had pause to wonder: can a red herring be elegant? I go into it here, mostly regarding logic game puzzles:

Can Red Herrings Be Elegant?

This includes minor spoilers for Monkey Island and Golf Peaks but they’re worth it. In 2018 Tom Hermans wrote up an excellent primer on elegant puzzle design, with the following principles: A…

But I think the question goes broader than that. What are the arguments for and against allowing the player to pick up superfluous items? Should there be puzzle elements that ultimately don’t do anything?

Let’s take an example for which spoilers don’t really matter. When I was designing the (intentionally easy) observatory puzzle in Cragne Manor, I knew that by that late point in the game the player would be a bit tired of mega-puzzles and would be happy to have something relatively straightforward, but I was determined to give a modicum of challenge. But also, I wanted something that couldn’t be readily brute-forced.

The player comes to know they must project a star sign on to the wall, and they have a machine to do so, but the puzzle is in figuring out what the pulleys and levers all do. Most these levers just move one element in one direction, through a hidden list of the signs and houses. But one lever will just scramble the results, undoing any progression. It’s absolutely what the player doesn’t want to do. It’s a false path.

Was it an elegant puzzle element? On the one hand, the puzzle would have worked fine without it.On the other hand, it was just a red herring element, easily understood to momentarily mislead the player, before they quickly set themselves back on the right path.

A harder and perhaps more interesting version of the same puzzle would have the star signs be alternated at some unusual interval, or with each lever changing both a sign and a house by a different number of steps. If figuring out a pattern of steps was the part that enabled difficulty, then the scrambling lever would be completely unnecessary.

What do people think? Can a red herring or a false path be a good puzzle element? Or are they best to avoid?

Of course a red herring can be elegant!

In all seriousness, I have argued in the past that a good puzzle needs to be surprising, but inevitable in hindsight. Red herrings absolutely play a role in this, if the red herring appears at first to solve the puzzle, but then you realize that you’d overlooked clues that told you it was useless, that’s an elegant red herring.

In Spider and Web, the package is an elegant red herring.

One of the buttons in the Maintenance Room in Zork 1 would fall within your definition, I think. It was a memorable (in a good way) part of the game.

I think it can help with immersion. If everything that makes sense to be interactable with is interactable with, the player can feel more like they’re in the story rather than playing a work of IF developed by a person. They can think, “What would I do in this situation?” instead of “How did the dev intend this to be solved?”

There are multiple dead-end puzzles in Spaceship. The most obvious things you would do in a space emergency turn out not to work after you have spent quite some breath on them. Not wasted energy, because the red herring paths are elegant, well done puzzles in themselves.

The red herring is a fish in the lake. The description is “A very elegant fish.”

It’s a perfectly reasonable and well clued puzzle complication. As elegant as a relatively absurd late 90s point and click adventure game gets… 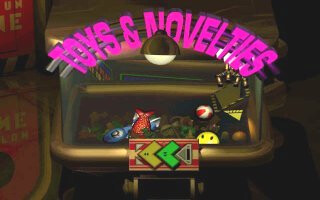