There is a fresh version of Tea and Sympathy available now.

I’m looking for volunteers to give it a whirl, please. You’ll need Python 3.8 or higher (instructions are given in the README). It takes no more than a few minutes to reach the shortest ending.

It’s a major rewrite since the debugging from last time. Should be a much improved experience.

Tea and Sympathy is the demo/teaching example for the Balladeer library, of which more news soon.

I’m going to create a number of blog articles (maybe even videos) to act as tutorials. We should see some decent progress in that direction before Christmas. All the best!

Nah I’m pretty sure that’s just pip on Windows being itself.

The bit about setting up a Python environment was a curve ball. Basically, if you’ve got python installed, then you just pip install thing, otherwise it doesn’t work.

Python is full of this not-working behaviour. I’ve yet to find out if there’s a portable deployable python runtime. So far, not found it. portablepython is no longer supported and Winpython is meant to be portable, but it depends on a bunch of environment variables, which of course won’t be there on another person’s machine. Also winpython is full of DLLs. Why isn’t it static?? I can’t find a win static python build either. It’s like they don’t want it to work!

I’ve mostly abandoned all hope with python, because of just these sorts of issues.

I have the “tea” game running. Nicely presented in the browser, but i keep being punished for typing the wrong thing, having to wait while the same messages repeat themselves again and again…

but i keep being punished for typing the wrong thing, having to wait while the same messages repeat themselves again and again

Yes, this is something not everyone enjoys

.
This game is a demo, and its purpose is to show off the capabilities of Balladeer. Hence flaunting the text animation, etc.

An author can choose the timing of text animation (or switch it off altogether).

Aha! I found the --quick option!

I tried playing the game, it’s a bit weird. But i guess that’s the design. I was surprised that inspect X is needed when look at X, look X, examine X, x X didn’t work?

Also, i think it should make you aware when it doesn’t understand. So, for example, typing random letters, doesn’t complain, but instead ignores you.

Aha! I found the --quick option!

Then you are a flinty-eyed top-tier adventurer

Thanks for spending time with this project.

I admit I haven’t been testing so much the terminal mode, which is more akin to the traditional IF experience.
If you have any recommendations there, I’d gladly incorporate them into the next release.

Just to let you know that the Balladeer development blog is up and running now.

Only a couple of articles there at the moment but I plan to update regularly.

You might want to consider doing a standalone release for Windows, since Python is such a pain on that platform. I’ve had good luck using the somewhat misleadingly named PyInstaller to do that.

Yes, the instructions for Tea and Sympathy take pains to walk a Windows user through the process. If they don’t work for you, please let me know and I will try to fix them.

But I also think that a tide is turning, and that many enthusiasts will embrace small Linux platforms like Raspberry Pi, etc.

Then many things which were blamed on Python will be seen as faults with Windows.

Just to ask out of curiosity;

Is there a way under windows to deploy a python runtime with your software.

I tried it, but didn’t get anywhere as it needed a whole bunch of files. But perhaps there is a way?

As @rockwalrus said a couple posts up, try PyInstaller.

The Zipapp method also looks promising (you run the app from the downloaded zip file).
But in my tests it hasn’t always worked properly. So I’m not recommending that yet but I’m hopeful for the future

@JoshGrams thanks, i’ll give it a shot!

Another update on Balladeer before a jam which is likely to keep me quiet for 3 weeks or so.

The code repository now has several examples which take you from Hello World to a fully working web application.

The development blog walks you through these. There’s also an article explaining the architecture of the framework itself.

The demo game, Tea and Sympathy is now at version 0.16.0, with full instructions on how to run it.
For the moment, there is one server online for anyone who is just curious to play.

Another update; there is a new example in the Balladeer repository, designed to demonstrate the enormous potential of approaching IF design from a web-native perspective.

This is a complete example of a Balladeer story which accepts text commands in the browser.
It also provides API endpoints to service a Javascript frontent.

The JS components create a graphical diorama, with extra product detail when the user
mouses over a game object.

The main focus of this demo is a JS implementation of a ‘typeahead’ prompt for user text input.

Here is a screenshot of 'Ten Green Bottles`, a traditional song crafted as Interactive Fiction in a Balladeer style: 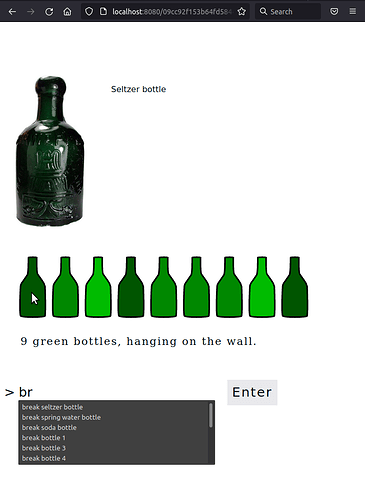 Do you have a demo we can try online?

I think running this example represents the sort of hurdle a prospective adopter would need to navigate on his own, as a sort of qualification step into the framework.

If there’s anything lacking in the documentation which stops you getting there, that’s definitely on me to fix. So please let me know if you run into any problems.

I’m intending to put together some tutorial videos soon. It’s hard to commit to a timescale because there’s a lot I need to learn myself on how to present and produce, etc. But my current target for that is August this year.

Just discovered this language, I’ve been looking for a Python-based interactive fiction system. The approach taken is very different from what I’ve been used to and I can tell it’ll take a long time to wrap my head around, but it seems like a very powerful system potentially. I look forward to seeing how this evolves.