Any consensus on narrative focus vs mechanics heavy games?

I have been batting this around ever since I found Twine. I"m more of a writer than a coder. At least that is how i see myself. Problem is ‘this is a niche communit that is highly dedicated because why else would you do it?’ and I just get this feeling something narration focused that’s maybe got branches but it’s more focused on story than ‘here are these neat mechanical bits to tinker with.’ wouldn’t be seen too highly or would be a dead giveaway ‘oh. newbie. let’s rip the guy to shreds on every fault and grammar issue that exists.’

I think people like both kinds! Perhaps different people, but either kind of game can get an audience.

I agree both kinds have their audiences, and there are great games of either type. Funny thing is, I also started writing Twine games recently and with my first game I was worried it wasn’t going to find an audience because it was very much puzzle-focused, and I associated Twine with more narrative-oriented experiences! I was glad to find out this wasn’t the case

Last year’s IfComp had vastly different Twine games - I was surprised there are so many styles.

The only thing I noticed almost universally results in poor ratings is very low interactivity - when a game has no reason to be a game, but basically is a short story split into passages, with no impactful branching.

The only thing I noticed almost universally results in poor ratings is very low interactivity - when a game has no reason to be a game, but basically is a short story split into passages, with no impactful branching.

See that’s the thing I’m afraid of since right now I have a collection of stories and I like how twine makes this a clear collection that can be sorted through at will in browser’ but it’s very ‘something’s missing.’ So ideas are turning towards making variables trigger so if you don’t go through specific points the main branch goes diffrently. My fear there is ‘not enough interactivty.’ I comefrom a plae of ‘longer form fiction’ as opposed to ‘you get a new choice at each paragraph.’

Closest I can think is ‘remember the choose your own adventure books?’ Then again those are at a minamum of two decades old for the newer ones and closer to thirty or forty years old for their heyday.’ Longer passages that give choices. Well… minus all but two of the endings being either death, surrealistic messes, or a surrealist death.’

Just boiling it all away ‘i don’t want to do the thing if i’m going to bark up a path nobody wants to deal with.’

So ideas are turning towards making variables trigger so if you don’t go through specific points the main branch goes diffrently.

I think adding variety the way you described (and not only having branching as an immediate consequence of a choice) is a great idea. I have little experience with old CYOA/gamebooks, but recently I’ve discovered the Lone Wolf Saga through an Android app and really enjoyed the variety abilities, equipment and even the character’s previous knowledge add to the story. Even the fact that each book basically had one “good” ending didn’t bother me at all, given the number of options between the starting and the ending point. And things like these – assigning stat values to the player’s character or checking for knowledge, or objects, obtained earlier, are really easy to do with variables in Twine.

Also, personally I’m fine with longer passages with fewer choices, provided that the choices are meaningful and the story engaging (Felicity Drake’s The Missing Ring from this year’s Spring Thing competition was one Twine game where there was often quite a lot of reading between choices, but it all felt non-linear and engaging, thanks to the investigation aspect, and the fact the story itself was well-written).

I’m fine with longer passages with fewer choices, provided that the choices are meaningful and the story engaging

Any consensus on ‘write story then go back in and add branches’? Or is there a better way that you’ve seen?

Personally, I like to create a rough outline of the entire story first (starting point, ending(s), major decision points) and then flesh it out part by part, which gives me a sense of direction, but still lets me add new branches. I’m sure it’s not the only way, but especially in a narrative with a lot of branching, it feels cleaner and more organised, knowing what you’re heading towards. I’ve never tried writing a complete, linear story first and adding branches later; I think I’d be afraid they would stand out as later additions or “afterthoughts” and not an integral part of the game.

There is certainly not a serious bias in favour of mechanics and against narrative in this community at this time. Both types of game seem to get very good reviews… if they’re good games.

People do expect some kind of interactivity. But note that this is not the same as having lots of branching. As a random Twine example, Porpentine’s howling dogs is held in high esteem, but it has very little branching.

I started primarily in parser, and I’ve found that I do a lot more actual writing in choice narrative format and a lot less debugging and coding - that can get extensive as well, but it’s up to the author. When The Short Game reviewed last year, one of them mentioned how he wasn’t used to actual exploration and mapping in a [Twine] game. (He said Twine although I don’t use Twine.)

I’m enjoying the control I have in choice-narrative. The fun part is I get to decide how and when the player interacts, and often I’m just giving the illusion of more choice than there actually is.

Any consensus on ‘write story then go back in and add branches’? Or is there a better way that you’ve seen?

Personally, I’d find it harder to add interactivity to a previously written story. I agree that outlining everything is good, but part of my enjoyment is playing around and building the scene structure on interactivity.

Not that you can’t write an ideal transcript, but part of me thinks that if you can write a story successfully without interactivity, it really doesn’t need it.

Personally, I’d find it harder to add interactivity to a previously written story. I agree that outlining everything is good, but part of my enjoyment is playing around and building the scene structure on interactivity.

Not that you can’t write an ideal transcript, but part of me thinks that if you can write a story successfully without interactivity, it really doesn’t need it.

I get what you’re saying.Maybe something’s lost in translation here but when I write i have a lot of ‘what if’ questions. so at those points hang a note on where that crops up at and where it might lead while working on a single starting branch/trunk then goflesh those notes out on other passes.

I have no idea what I’m doing so if I’m saying something literally everyone says please say so.

I have no idea what I’m doing so if I’m saying something literally everyone says please say so.

Don’t worry at all, this forum is meant for this type of discussion.

I’d almost rather build the game with placeholder text and make sure it works and interacts first, then go back and fill in the prose. That said, there’s nothing wrong with a low-interactivity game. Some people prefer that. If you’ve played The Uncle Who Works for Nintendo or My Father’s Long Long Legs those are both successful and well-regarded choice narratives that are mostly linear.

Interactivity in a choice narrative can be about playing with and experiencing the text and the format rather than changing the plot or branching. If you’ve read House of Leaves, I’d consider that book very “interactive” despite it being a linear narrative (albeit one that goes around and around in circles and knots on multiple levels in an attempt to get the reader lost.)

Nitpick: Doesn’t The Uncle Who Plays For Nintendo have like six endings? Not sure where the branching is but I got owned pretty bad when I played it.

Besides the other examples that have been mentioned, Solarium is worth checking out–most of the game is a hub structure, where there’s a central page from which you can explore several stories but the stories themselves aren’t branching. There’s other non-branching interaction too, like cycling choices that let you express how you feel about the text without changing what comes next.

Actually I think some of the stuff you do with cycling text affects some of the text you get at the end, but it’s very subtle.

Unit 322 (disambiguation) is another story with a hub structure, where the individual stories are not quite linear (in fact they’re connected IIRC), but it’s still very much about narrative in a non-branching way.

Bob Dylan’s works feature the lyrics prominently, and a lot of his songs wouldn’t be as good if they were instrumental-only (although some would!). On the other hand, Bach achieved wonderful music without lyrics.

The lyrics of music are similar to the text of the game, and the actual music is similar to interactivity.

Even further with this analogy, I find that the best interactive fiction games have a rhythm. Bogeyman, 80 Days, Howling Dogs, and Birdland, four of the best choice games of all time, all have distinct rhythms, in this case days passing with a common sequence of events (selling/buying/searching/travel in 80 Days, bird dreams/camp activities in Birdland, etc.).

Parser games have a natural rhythm of look/take/use, but they often fall flat in the narrative area.

Anyway, I’m rambling, but that’s something this discussion made me think of.

Nitpick: Doesn’t The Uncle Who Plays For Nintendo have like six endings? Not sure where the branching is but I got owned pretty bad when I played it.

Oh sure, but I’d say just because a story does branch doesn’t mean it can’t also be mostly linear. But I’m all for interactive linearity. I like it in works like Polish the Glass and Screw You, Bear Dad. 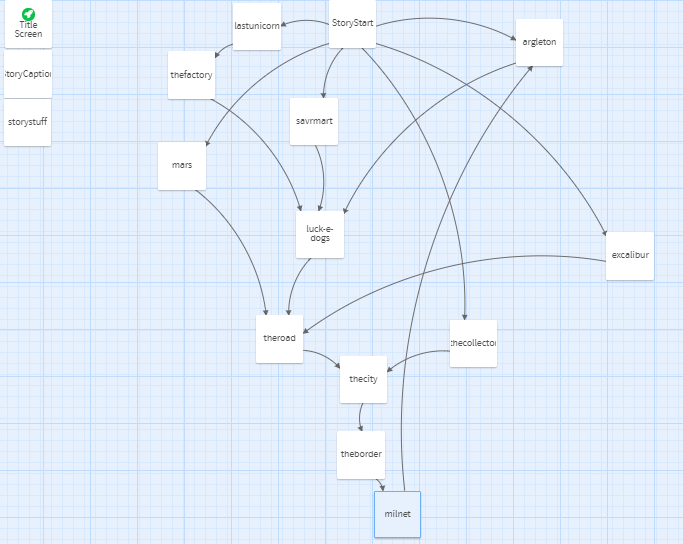 Map of what’s in progress. Originally had one path that seemed to make a tour of the other starting points which just felt like ‘yea that is very blatantly the best option because variable collecting.’ due to each starting point having a flag that gets tripped to true and will affect what shows up on the following nodes. Might break the map up a bit more with more nodes but this is ‘bare minimum’ plan.