ACE was an IF authoring system from the late '90s. Its author, Andrew Clark, wrote a Windows version of it and (theoretically) a Java version as well. The problem I have stems from a usual source—the loss of the original website. While you can download the authoring tools, the manual for the language seems to be lost, and without that there’s little point in archiving the tools.

If anyone has the ACE Manual stashed someplace… either let me know or submit it to the IF archive. Please.

Several of the authors that used it are still around but it’s probably unlikely they have the manual & tutorial material saved anywhere. I will ask around, though. It would be nice to get a better archive of material together for the ACE adventures. Quite a few of the games are currently lost.

I’ve got the ACE Manual and 8 files related to the sample game. I’ll attach them here (in a zip file) so that everyone’s got access to them. Feel free to upload to the IF Archive.
ACE-doc.zip (63.7 KB)

On the subject of ACE, these are the games I’m aware of. Only the two in bold are known to exist. The others are missing. If anyone knows the whereabouts of any of these games, please provide a link here or upload to the IF Archive and/or the Internet Archive and let us know about it here. (Note that some of the games have been ported to other formats. I’m only looking for the ACE versions.)

I’m very pleased to see that you had that one archived, Garry.

ACE is basically a straight port of CP/M PAWs, so everything in there is pretty much as it appears in the PAWs manual, apart from a few notes on the compiler etc. The layout of the text source code is also, I think, identical.

I presume that the compiler is archived somewhere?

For those that don’t know, ACE was produced by Andrew Clark, the son of adventure author Peter Clark. Peter originally wrote his games using CP/M PAWs for the Amstrad CPC and was looking for a system that was just as friendly/familiar to use but would work on modern machines. Luckily his son, Andy, had just finished a computer degree and programmed ACE for his dad (and the rest of the community to use).

Like I said, it’s pretty much 100% PAW. I expect, if you had the sources to any of the ACE adventures, then it would be pretty easy to back-port them to PAWS and DAAD. (Subject to memory and 8-bit number limitations)

uhm… sometime I should test ACE under Wine and report…

As far as the compilers go, WinAce is available as C++ source, but I have not attempted to compile it as I’m not familiar with C++. There is also JACE, a Java implementation, but who knows what condition it’s in.

Just from perusing the manual (thanks, Garry!) I can see the close relationship to PAW—in fact, I think WinPAW was able to play ACE games. It’s unfortunate many of the ACE games were lost with the death of the aceadventuregames website.

We’re working on preserving the ACE games, thanks to one of the authors.

Not long ago Nacho A. Llorente, webmaster of the now defunct PAWS Reservoir website claimed at the spanish telegram group “Retroaventuras” to have the whole lot. I strongly suggested him to send it to the IF archive as well as some other IF spanish repositories, but sadly he didn’t reply. I’ll try to insist

… and yeah, I tried the wayback machine both with the PAWS Reservoir and the old ACE website… no luck!

Yes, I have ACE DOS and WINDOWS preserved, along with a manual (a doc file mostly copy paste from a paw manual with some tunings). It doesn’t work very well, though, but i’m happy to drobox the files for anyone to download.

Just to further clarify, ACE is somewhere in between QUILL and PAWS. It lacks PARSE, TIMEOUT and a few other beauties. Yes, limits are much larger rhan the 8-bit 256 frontier but most of the nice PAWS twists cannot be achieved, making ACEd games just quilled adventures with larger maps, large flag values, etc.

Please do so! I can test them out and upload them to the if-archive.

Ill be back on saturday, ill do then

I wouldn’t agree that they’re just large Quilled adventures. The key part of PAW was always the process tables… that’s the bit where you can do all the clever stuff, and ACE has those. I’ve never used PARSE or TIMEOUT, and I’ve written twenty-odd PAWed games.

(An archive of some, perhaps all, the ACE games is on the way to me in the post at the moment.)

I was only asked about the manuals, so that’s all I uploaded here. In my bin folder, I have Ace.exe (which is presumably the MS-DOS interpreter), Compiler.exe (the compiler, d’oh) and WinAce.exe (the Windows interpreter). The latter is version 1.0 dated 2003 and it works fine with Windows 7. Here’s a couple of screen grabs (without the window frame and input text box): 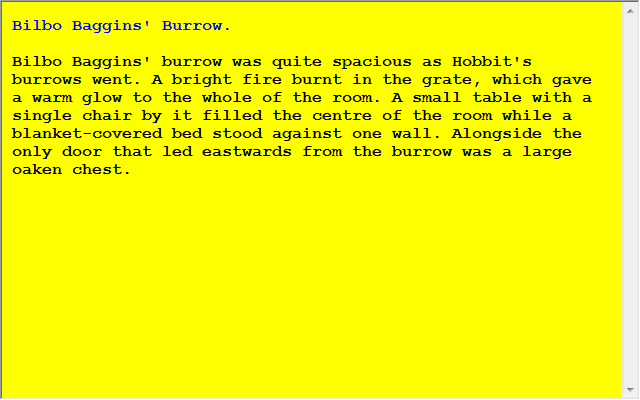 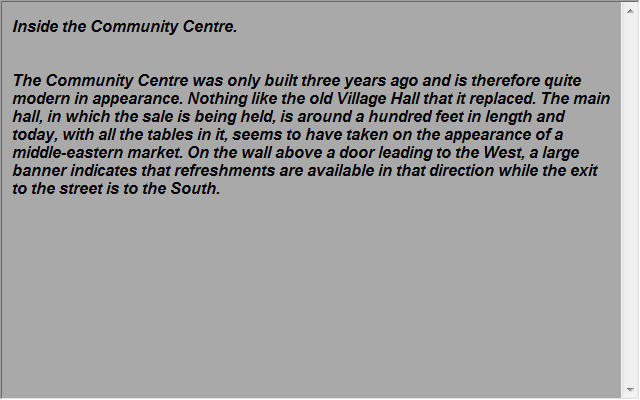 I don’t remember where I downloaded this stuff, but it was most likely from the Internet Archive.

Thanks to Doreen Bardon I now have a disk with (all?) the ACE adventures on, so I’ll gradually go through that and share the contents when I get a bit of time over the next week or so.

Although the compiler seems to be okay under Windows 7, there may be some unforeseen issues. I know that I’ve seen Larry writing about having to abandon one of his games using it, due to a compiler bug. I’m guessing that particular bug was never fixed, but it’s unclear what it affected.

As you say, the Windows version of the ACE player seems to start okay under modern Windows; but probably requires more rigorous testing to be sure.

I’ll look at sharing some stuff soon. There are lots of games here, including several later Megapoints competition remakes of earlier 8-bit games… 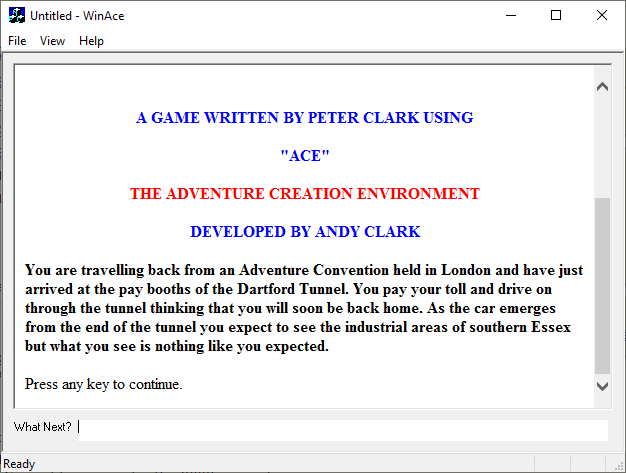 I’m currently bundling up a file with all the ACE games that I’ve managed to obtain from Doreen. I’ve amended Garry’s list below. Bold shows what we currently have access to.

There also seems to be at least three different file sizes for the WinACE player; despite them all being labelled v1.0.

Here are the games collected so far…