A script to create IFDB pages for itch.io games

I wrote a very simple python script to upload game profiles from itch to IFDB. It first scrapes the itch game page, and uses firefox webdriver and selenium to create the IFDB page (the putific API didn’t seem to be working for me). There are still a lot of issues with the script, including the formatting of the description text, and the fact that the release date cannot be seen while not logged in to itch (so it has to be manually updated), but it generally works.

I’ve uploaded a few games with it: The Twine Fishing Simulator - Details, More a Haunting than a History - Details, Trigaea - Details.

Feel free to use it however. It might also be useful as a base to create a script for uploading ifcomp games or something like that. 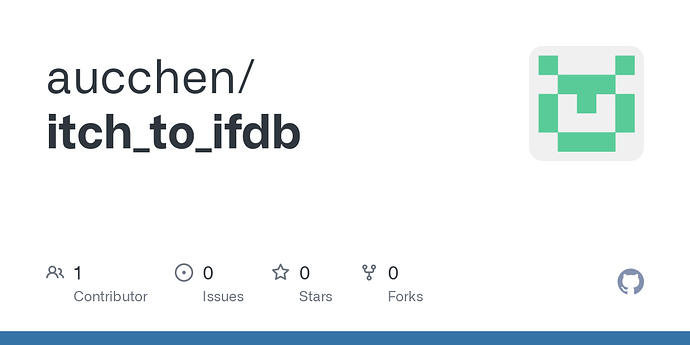 Contribute to aucchen/itch_to_ifdb development by creating an account on GitHub.

This is a great utility. The one thing to be aware of - and you didn’t say this was your intention, but for anyone else as well: Please make sure this is a manual process. Don’t create a thing like this and set it off automatically scraping any sites for IFDB data.

The authors had no idea that their “my crappy apartment” experimentations were getting logged and advertised for play on another website.

“… that their crappy “my apartment” experimentations were…”

“Not all of us are slobs you know,” Nils says as he tries to discretely draw the curtains to hide the utter shambles that pass for kitchen counters.

“… that their crappy “my apartment” experimentations were…”

I understand what you mean! “My crappy apartment” is a common IF trope. It’s often the first type of parser experimentation authors often do of their own living space - usually implementing a couch, a TV, and a remote lost under a couch cushion. It kind of brings together most kinds of things people start out learning - a room, an enterable supporter, a device, a hidden object that’s the key to controlling the device… It’s the ultimate “write what you know” thing.

It’s also common in finished IF as a starting area - if you’ve played a game that starts in the living room with a TV, couch, and a remote control where the parser often remarks “It’s your apartment. It isn’t much to look at, but it’s yours…” to that effect.