Zilf is not recognizable as an internal or external command

I watched the banana retro video going over the quick start, and in the video he puts “zilf file.zil” into the cmd prompt. When I try that, I get “‘zilf’ is not recognizable as an internal or external command” etc. I am not really sure what to do, there is no real docs for this

The weirdest part about this is that I already have downloaded zilf 0.9.

“‘zilf’ is not recognizable as an internal or external command”

You have to watch that Banana Retro guy, he’s a bit dodgy

I’m going to assume you’re using Windows, I use 0.9 also and found that I had to register ZILF otherwise I got the message you are getting. Try following these instructions on Stack Overflow…

"Register" an .exe so you can run it from any command line in Windows

I believe this should fix it. 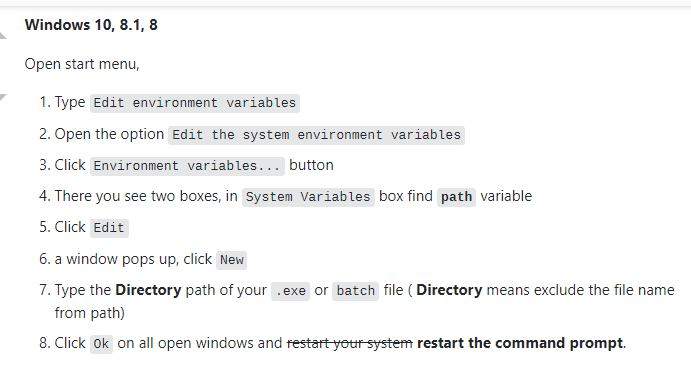 I you don’t, for some reason, want to change your environment variables, you can alway refer to ZILF with its full path. This will work on any platform, even though I have not tried any other than the window one.

Here is an example of a batch-script I use to both compile and generate, and use, the abbreviations.

You can always do a combination of the two. When I do batch scripts, I like to add the path right to windows path. Although this is straying from the original question, but it’s still useful.

However, my personal preference is running batches directly from the command line so I can just press “up, enter” to rerun them instead of touching the mouse. Because of that, I can pass arguments to the batch and reuse them for different source files.

For arguments, %1 is the first argument, %2 is the second, and so on. %0 refers to the batch script itself and %~dp0 is the batch’s path. I also like to set the compiler to a variable so its location in the script is separated from the calling line for clarity.

That may have been info overkill. Oh well.

That message is generated by ZILF itself, telling you that it doesn’t like something in the file zilp.zil. Can you attach that file to a posting here?

This means that the < and > doesn’t match in zilp.zil. The error is probably a couple of lines before line 51 but it’s here the compiler notices that it doesn’t line up.

When you run the ZAPF command are you leaving ZIL as the file type or changing it to ZAP?

ZILF does it’s thing, next you type… zapf game.ZAP (rather than zil)

The internet has permanently ruined me. I can only read ZILF as an acronym, involving zombies…

I was able to figure it out. Thank you all for the help.