This game placed fourth in IFComp last year - an impressive feat considering that the author claims never to have written any IF, or coded anything at all, before this. It’s a gothic horror game, part of the broad tradition that inclues Anchorhead, and it takes place in an old manor house, a favorite IF setting since Infocom’s times. However, two things set this game apart from others and give it additional interest.

First, there’s the unusual command set.The player character is a ghost (who we are and how we died initially unknown) and therefore can’t do many of the standard adventure game activities, such as pick things up and carry them around. As in many horror stories, ghosts have feelings that gives them limited power to act in the world of the living. Besides LOOK and EXAMINE, the actions available are the names of emotions that the ghost experiences while exploring the house and gradually recovering her memories.

Mechanically, the emotion-based actions are a perfect solution to the problem of allowing a disembodied spirit to do things. Story-wise, it’s a mixed bag. The connections between particular emotions and actions are well thought out: LOVE draws you into things, DESIRE draws things to you (I love the distinction between those two—how wrong it would be if they were reversed!), ANGER pushes things away. However, I’m not thrilled about the emotions being applied mechanically to arbitrary objects. Solving the puzzles requires you to get “angry” at buttons on a number pad and that sort of thing, which makes much of the player’s emotional life seem rather artificial. The best one from this point of view is DESIRE, which has a good reason for which objects it applies to, and when. FEAR is also good: I thought at first we feared mirrors because ghosts are just like that, but there turns out to be more to it.

I especially didn’t like the LOVE/HATE mechanic. The restriction to metal objects is too arbitrary to believe in any way within the story, and, worse, this is introduced to the player by means of the tin soldier which the protagonist thought of as protecting her when she was a child. I can’t image that, even as a ghost, I could force myself to hate the teddy bear that kept me safe at night when I was little—and if I could, surely something would feel different afterwards. Granted, this is ultimately a story about ruthless vengeance, but if this moment was meant to say something about what revenge does to the spirit, I’m afraid it doesn’t come off.

To be clear, I consider this a minor point in the end; the goal was to provide a unique command set that would allow action to a disembodied character, and it works as such. Moreover, it’s worth noting that if the game clearly succeeded in making me identify emotionally with the protagonist in some degree, or the points where I failed to do so wouldn’t have stood out. I would consider that this aspect of the game is ultimately a success. Also, I thought the puzzles themselves, with the above caveats, were good. The door puzzle, which seems to have bothered some players, was fine with me. In fact, I’m rather taken with the idea of the protagonist gaining this enlightenment through the kind of close inpection of the house that she rarely had a chance to do while alive. Death seems quite leisurely—until we get down to business.

The second thing that makes this game special is the literary background, specifically Gerard Manley Hopkins’ poem “Spring and Fall,” which inspires the game’s setting, protagonist, and title:

(The accent marks, incidentally, were added by Hopkins to clarify the scansion in lines where he expected readers might be confused by his meter, called “sprung rhythm,” which retains a tighter structure than pure free verse does, but has no set number of syllables. Why “sprung,” I’ve never been clear on. In any case, I deeply appreciate that the game includes the accent marks when the poem is quoted.)

Hopkins’ verse—fickle, freckled, lovely and lush—has to my knowledge never been used in IF before. The poem selected here takes an elegiac, melancholy tone, but the poet’s thoughts on “the blight man was born for” are occasioned by a child’s sorrow over the leaves falling in autumn, not often a cause of great emotion in those of us who have seen the spring and fall more than a few times. The game celebrates this poem’s beauty, but moves it into a tragic—in fact, horrifying—setting, where the same Margaret (is it?) becomes an abused child surrounded by evil. The juxtaposition of this poem with this backstory is an effective device to enhance the horror.

It became clear early on that a great crime had been committed, but I was expecting a fairly neat resolution, with all wrongs revealed, the wrongdoers brought to justice, and the victim able to rest in peace. Instead, the ending turned out to be rather brutal. You could maybe call it justice, but there’s no peace and no real closure. (Perhaps that moment with the tin soldier should have led me to expect that?) However, while this conflagration isn’t exactly the ending I was hoping for, it’s one that makes sense. It fits with what came before, gathering all the emotions we’ve dealt with into one great blaze of uncontrollable passion, one final dies irae. Perhaps that’s the blight man was born for.

Finally, since I think it’s fun to share maps, here’s the one I made: 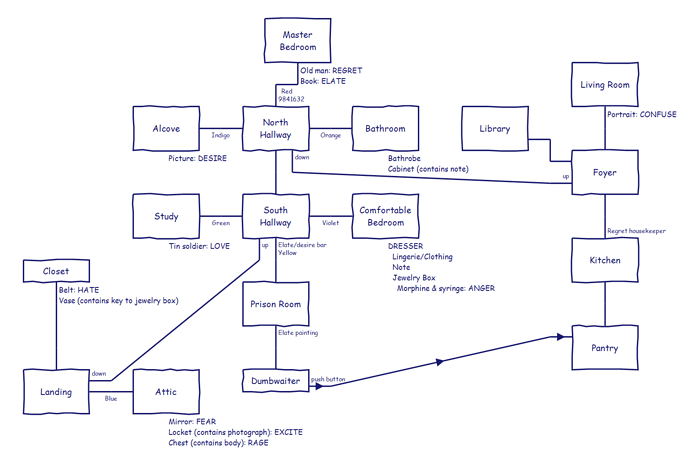 the author claims never to have written any IF, or coded anything at all, before this.

Man, if this turns not to be true, @AmandaB will have perpetrated one of the most spectacular long cons in history!

Anyway, I enjoyed this writeup! Your exegesis of the emotion-based actions made me realize that part of the reason this part of the game work so well is the nicely-tuned difficulty: if the puzzles were too easy, you’d just fly through them without thinking about what you were doing, and if they were too hard you’d just lawnmower every emotion with every object, which would likewise undercut the impact. It’s a hard balance to strike!

Now I can’t resist to write down some lines.
I betatested and played the game about twelve times.
I have to say that WHHOGG impact me from the first time.
The game is top original, is fully playable and its plot is fully developed. I have to say that at the end I felt the sensation that I wanted more, I wanted to go on playing.

In the begginings the game was more difficult to play, but Amanda included commands such exit to make easyer to play.

I liked very much every playtest of the game becouse I saw the development of this singular game.

Amanda always has in mind what she want to do with the game, this means that almost all has a purpose in the game. Nothing is casualty.
An example beween a lot is that you can see the garden when you open curtains in the attic and have a reflexion about life and autum. There are a lot of things to discover wich extends the plot. I think few people has search and found everything becouse the walkthrough provided was a straight forward one.

Thanks so much for taking the time to play my game and review it! I really appreciate it. It has been especially gratifying that so many IF players are Hopkins fans.

Man, if this turns not to be true, @AmandaB will have perpetrated one of the most spectacular long cons in history!

Well, after I made bazillions writing Minecraft, I was bored and thought I’d pull a fast one on the poor unsuspecting IF community. Haha! Don’t all of you feel dumb now?

I did technically code things in the Ada class I took in the 90s in college, but I don’t remember anything about it except just waiting for the semester to be over.

In the begginings the game was more difficult to play,

That is the nicest way you could describe the game in its first form. I think “train wreck” would be more accurate. @Jade stuck with this game from the beginning, through all the buggy unfinishable forms it took, and contributed so much to it.

An example beween a lot is that you can see the garden when you open curtains in the attic and have a reflexion about life and autum.

I think I missed this! I did open the curtains in the attic and look out, but all I got was:

I don’t know if you’ve seen this yet, but your game is one of three 2021 games listed on the automatically-generated IFDB top 100 list, in 60th place (all-time):

I did see that, and it was so befuddling that I just went to bed. It is amazing and flattering, but I’m also realistic enough to know that the couple of 2-3 star reviews that are surely coming at some point will knock me off of that list in short order.
Thanks for making sure I saw it!

The nice thing about that situation is that it’s win-win; the only way it can get knocked down is if more people play it, so it will either become more popular or stay in a ‘trophy spot’. Congrats!

Hashtag why not both, as the kids say.

Congratulations Amanda. I loved this game since first version.
And of course the same for you, Brian, you are always a bottomless pit of knowledge.