Hi, I made Vampire Ltd. It took 13th place in IFComp 2020. I’m still dumbstruck by this, and I don’t want to make a fuss about it in case there’s been some kind of mistake and they take the prize money away again. Thanks to everyone who played, reviewed and rated Vampire Ltd !

I’ve been writing a post-mortem for about a week now, but it’s ended up way too long and it’s not done. So here’s a much briefer account of what I like about the game and what I don’t, and you can ask me about anything you want to know more about!

Concept
I’ve been trying to make a vampire weakness game for years now. It just seemed like such a good idea that I wanted to do it before anyone else did.

I used the idea of vampire weaknesses once before in a very bad 5-minute choice-based game I made for a Unity tutorial a year or two ago. You can play that here. Have fun spotting the jokes I recycled!

I have a bunch of designs for a bigger version of Vampire Ltd that I could never get off the ground. I have been job-hunting for… a long time , so when lockdown hit and no one was hiring, I scoped my designs down and just tried my best to make something presentable. Development started in mid-May and was just about done by mid-September.

Jokes
The most common thing people liked about the game was the jokes. This felt really good to hear. When you’re writing something funny, you stop laughing at your own jokes after a week, and then you’re stuck with them for the rest of the project.

“As blood-sucking as ever” is my favourite joke. Surely someone else has thought of this one in the 27 years since Curses .

Characters
The idea behind the vampires-as-capitalism part of Vampire Ltd was to base then on Elon Musk types – people who have clearly failed upwards, who have become rich and respected pioneers despite, e.g., constantly sabotaging their own company’s stock prices because they can’t stop tweeting. Thus, Nero is an idiot, and Hadrian is an idiot with better press.

I was worried that Nero might be unpleasant as a protagonist, but people didn’t seem to mind. I think it helps that Nero is too pathetic to feel dangerous.

Conversation
I don’t get on with ask/tell systems. I usually spend most of the conversation getting default responses while I figure out what an NPC knows. I wanted NPC conversation in Vampire Ltd to be much smoother and well-defined, so I went for a LucasArts-style menu system. I like how it came out, although I could have used the prompts a little better to assert Nero’s character.

I abuse the conversation system for the computer and phone devices. I thought that the extension I was using – Michael Martin’s Quip-Based Conversation – required a person to talk to. I later found out that you can initiate a conversation with nobody, but not before I had attached an invisible person to every computer who gets talked to whenever the player uses the computer.

Here’s a couple of the flowcharts I made to plan conversations: 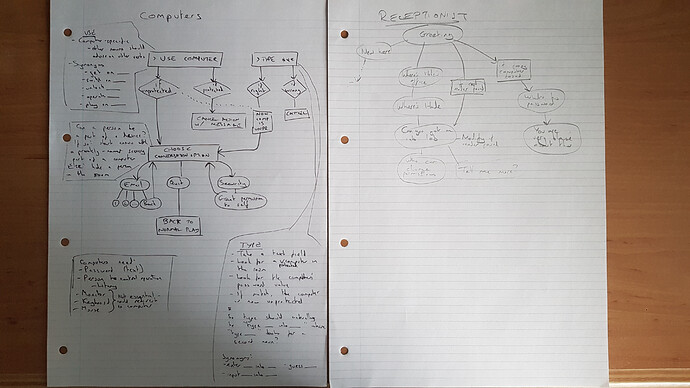 Length
I scoped Vampire Ltd down from my original ideas to what I thought was 90 minutes. This was to make the project more manageable and less overwhelming to make, and to revise it for IFComp. Unfortunately, I overestimated by quite a long way – testers reported about an hour each, and reviewers seems to have blasted through in way under that! I don’t mind the length personally, but I think many reviewers wanted more. Lesson learned for next time.

Puzzle design
Two major faults with the puzzle design. Firstly, I don’t think they make enough varied use of vampire tropes. They lean too hard on getting permission to enter places, and a lot of them are basically locked doors and keys. A lot of other vampire-y puzzles got cut out of my design because they didn’t fit the story, but I should have tried harder to integrate these.

Secondly, the puzzles are very easy – perhaps too easy for some. Originally the puzzles were too hard because of bad hinting and poor synonyms. (One unlucky tester tried to brute-force the password puzzle, but because I did a bad job, whenever they tried something like “type in password”, the game thought they were trying to type “in password”…) I added much stronger in-game hinting to correct this, but I think I overcorrected. I’m happy that Vampire Ltd is too easy instead of too hard, but I’d like my next game to be a little tougher.

I will say that I like the grapes puzzle, although it doesn’t fit into the story well enough (I could move it elsewhere or cut it out entirely without causing many ripples). I also like how the final puzzle against Hadrian uses the whole map.

Writing
Writing is not my strong point, which is a shame in a text-based medium. Jokes help to cover it up, but if you don’t like the jokes, the game’s wordiness and clumsy plotting is exposed. I tried really hard to keep the text brief – I can be a lot wordier than this – but unfortunately, the only way to become a better writer is to do a lot of bad writing.

What’s next
I’m planning a post-comp release of Vampire Ltd. It won’t add any substantial content to the game itself, but it’ll add some developer commentary and fix a few bugs.

I’m not planning another game in the Vampire Ltd universe, but never say never and all.

I’ve started work on something I hope to submit to IFComp 2021. It will be an Obra Dinn-like puzzler set in the world of professional wrestling, where you have to piece together the history of a championship title. I can’t promise that this will see the light of day yet because I won’t know if the gameplay is any good until I’ve prototyped it, but coming up with bad wrestler names and gimmicks has made me laugh a lot at my own jokes.

Thank you
I am endlessly grateful to my testers – AKheon, Christopher Merriner, Dark Star, Mathbrush, Mike Russo and Peter M. J. Gross – for putting up with game-breaking bugs and confusing hints to help improve Vampire Ltd .

Thank you to the organisers of IFComp and the whole community here. What a pleasure. I’m sorry I didn’t participate more.

Thank you all for playing, rating and reviewing. Even if you didn’t like Vampire Ltd very much. Every review I’ve seen has been really helpful to me, whether it made me feel good or exposed flaws I need to think about for my next game.

Ask me anything about Vampire Ltd!

I thought the job interview conversation was the funniest moment in the comp.

I also felt the game was a little too short, but I think you should interpret people finding your game short as people really liking your game and wishing there were more.

I’ve started work on something I hope to submit to IFComp 2021. It will be an Obra Dinn -like puzzler set in the world of professional wrestling, where you have to piece together the history of a championship title.

Congrats again on Vampire Ltd, Alex – I think it made me laugh the hardest of any game in the Comp! I appreciated seeing more about your process and your puzzle-charts, which look like a fun way of working stuff out (my process is, uh, not quite as organized). Also since you mentioned Obra Dinn, have you seen Family? It’s a free Dinn-like about piecing together a messy 1980s British music scene, with all the bands breaking up and reforming – music is great too. Might be an interesting thing to look at for design inspiration, or just to have fun with!

Mike, I haven’t seen Family… but I have played Rivals, which looks like it’s by the same person and which is another inspiration for my wrestling game idea! Looking forward to trying Family later.

I used flowcharts here mostly because the Quip-Based Conversation code gets harder to read the bigger the conversation gets. Here’s some of what the receptionist conversation ended up looking like: 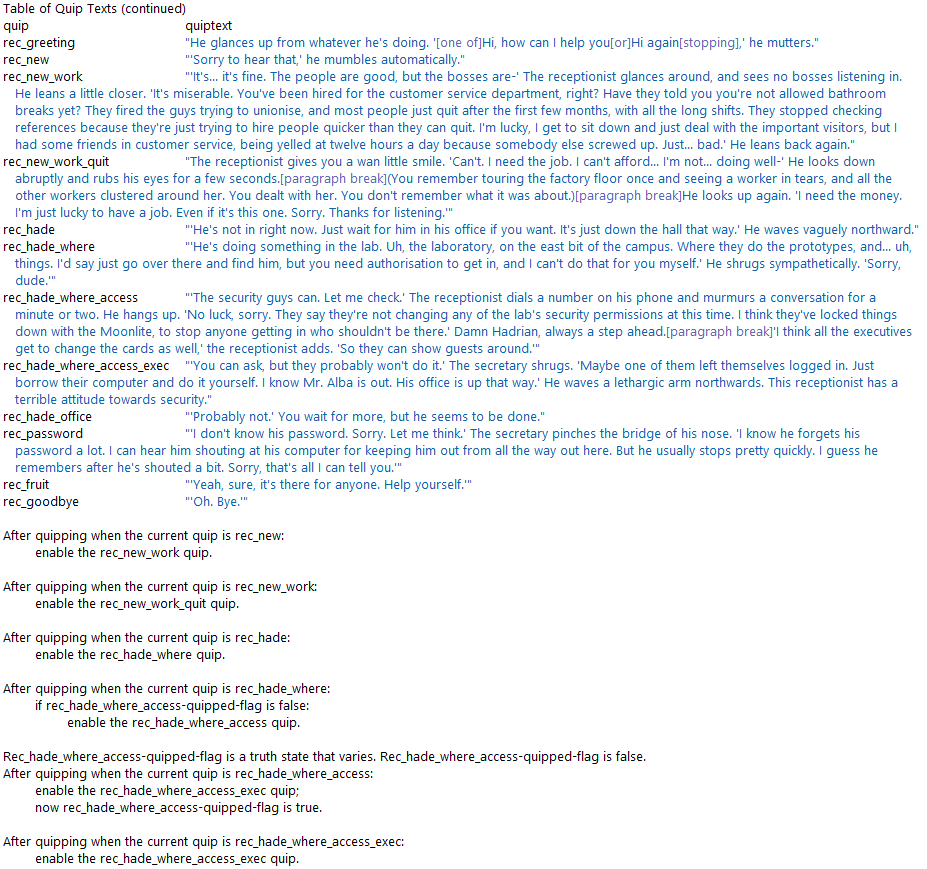 Every conversation is a list of quips and responses, and then a bigger list of after statements to toggle conversation options as required. It’s very easy to lose track of what the player and the NPC should be able to talk about. It gets even messier when the player state can change the conversation (as with the janitor conversation, which checks your inventory to track how close you are to solving the grapes puzzle). I had to use flowcharts because it was impossible for me to visualise the flow of conversation just based on what I had written in the Inform 7 IDE.