Use of authoring systems as an introduction to programming

I have inquired about IF games emulating real computer environments/applications in another thread, but the next issue I wonder about is whether you think teaching an authoring system would be a good first step towards learning to program. In many ways a system like TADS is closer in syntax to what you find when programming, but even the more “natural language” systems like INFORM introduce elements like logic, shared behavior, and many others. Even the non-parser systems can be used in ways like you see in Scratch (or games like Human Resource Machine). Have anyone tried this method or perhaps started with IF and then used their knowledge to progress to “actual” programming?

This is where I’ll do my usual plug for Adventuron, my authoring system of choice, which was originally conceived as tool to teach coding skills in schools (as the ‘classroom’ branding indicates), complete with tutorials and sample games. It may not have been particularly successful with its intended target audience, and there are possibly elements of the language that are a little idiosyncratic (so I’m told; I’m no expert), but having learned how to code with it over the past couple of years I can certainly say I’d feel a lot more confident about transferring the skills I’ve learnt to another programming language.

I am a retired teacher. I ran across this site: Teaching and Learning with IF a few years ago. It still has a lot of relevant information.

I am putting together a presentation for the Texas Distance Learning Assn. for their annual convention at the end of March 23. It will include I7, TADS, Twine and Adventuron.

If Christopher is going too, so I am I…

I will suggest looking at QuestJS. 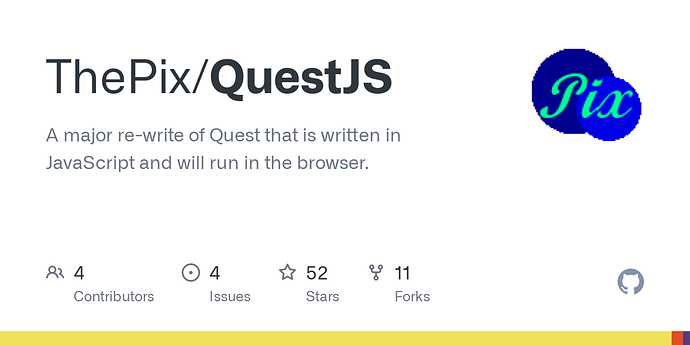 A major re-write of Quest that is written in JavaScript and will run in the browser. - Home · ThePix/QuestJS Wiki

The big advantage it offers is that when you learn QuestJS, you are also learning JavaScript, arguably the most popular programming language, so the skills you acquire are immediately transferable.

I have inquired about IF games emulating real computer environments/applications in another thread, but the next issue I wonder about is whether you think teaching an authoring system would be a good first step towards learning to program. In many ways a system like TADS is closer in syntax to what you find when programming, but even the more “natural language” systems like INFORM introduce elements like logic, shared behavior, and many others.

Being in the process of learning something of a new language (Roblox’s version of LUA) it has made me realise anew, perhaps, that programming is programming. Non-tricky things like variables are constants (ha!) across languages.

When I use Inform 7, when I go to do anything moderately tricky behind the scenes, I’m still using what I learned in AppleSoft BASIC almost four decades ago:

I’ve never programmed for a day job, and I’ve gone from Applesoft BASIC to some 8/16 bit assembly, then nothing new for decades (well, HTML), then to Inform 7, and now to Roblox LUA.

Learning this LUA thing, I watched about 20 tutorial videos in a row without typing anything. For someone less experienced, that’s probably a bad way to go about it, but really I was just learning the new syntax behind the same ideas I knew already. I didn’t need to relearn the ideas. Then I moved to copy and pasting examples while understanding them, tweaking them occasionally, and now very infrequently I write a line of my own from scratch. And it doesn’t work and I poke it or review the examples again until it does.

So I think you can use almost any language to teach programming, but students aren’t aware at the start that the same concepts may repeat. They’re always bewitched (bamboozled?) by all they can see in front of them initially, the forest of syntax.

EDIT: It just occurred to me, Inform taught me about classes. And that has paid off for LUA.

The University of Michigan-Dearborn used to run a course on games programming and the first major homework assignment was to write an adventure using Inform 6. It was amazing what those students came up with in just a couple of weeks.

I must also back up @ChristopherMerriner’s suggestion to use Adventuron. Adventuron’s syntax is somewhat unorthodox, but it has a built-in editor with syntax colouring, auto suggestions, error detection and so on, and you can see your progress immediately without mucking about with editors, compilers, linkers and/or assemblers. It is known to have been used in a number of school environments and a lot of first-timers have written their first adventure in Adventuron and some have stuck with it and written some really nice games.

In truth I’m more interested in elements of programming rather than a specific paradigm like OOP, and as you said, once you know the fundamentals and the way of thinking, the rest is syntax and libraries.
Personally I am more intrigued by the attempts of natural language syntax such as ALAN and Inform 7 (especially the latter). I have no experience of my own in Inform 6 or TADS to know how well do those translate, but I assume that since all of them incorporate the same elements, that is choice management, shared elements, assigned values, message handling and data manipulation, not to mention source management, compilation, deployment and running a program, that you should be able to “pick up” actual programming very easily once you have some experience in this.