Is anyone aware of any two-player parser games? I’ve wondered about this for a long time, and @MiloM 's LNoA bumped that wondering to the front of my mind.

I’m working on a short, sort of proof-of-concept 2-player parser game, but of course I’d like to play anything that’s already out there.

Well, there is Graham Nelson’s very own Escape from Solaris, from 1984: 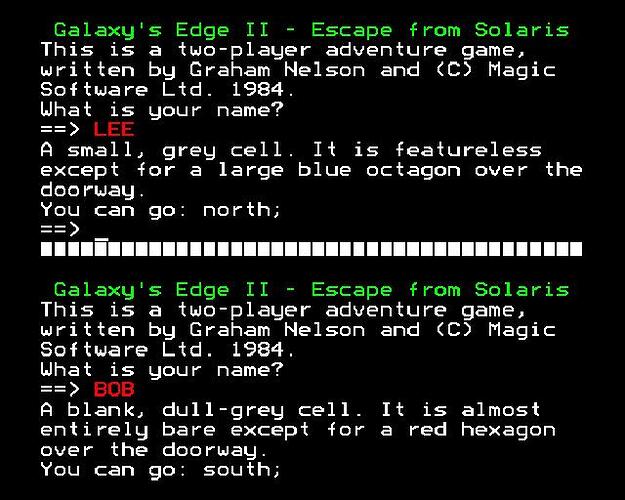 Published by Magic Software in 1984

But the state of the art may have moved on a bit since then (or maybe it hasn’t?)

Thanks! I was unaware of this. Shame on my Dad for never getting me this.

Here’s this video showing how the 2-player nature of Nelson’s game works.

Obviously what I have in mind works differently!

In French, there’s Pirates des Charaïbes. The game alternates between two characters every five turns and the instructions say that ideally, it should be played by two players. Of course, it’s also possible to complete it alone by playing both characters.

Not sure if it’s the kind of thing you had in mind, and you have to be able to read French to play it, naturally.

My French is too poor to play it. Would you mind telling me how the 2-player mechanic works?
I mean, do you have to play it on the same screen? Or is there some way you can play it separately?

Actually, I haven’t really played it. (I wanted to play with someone else but I found no-one and after that I had more important things to do.)

Yes, it’s same screen. I believe we say “hot-seat” for this kind of game? That is, you have 5 turns to take actions, the the character swaps and you give the keyboard to the other player, who has 5 turns, and so on. Any player can WAIT to give the hand to the other one immediately.

It’s cooperative, so the player waiting doesn’t need to look away while the other plays, both can stay at the computer at all time.

If I understood correctly, in the muliplayer game from IFComp, you could play at distance by telling the other player to click on the same link than you, or something like that? If that’s so, then the game I mentionned is not like that.

While it’s Not the Same Thing, are you familiar with MUDs (or their cousins, MOOs, MUSHes, MUCKs)? They’re multi-player, not two-player, and while they often serve mainly as chat rooms in use, some of them implemented puzzles; occasionally, cooperation was necessary to surpass some given obstacle.

In terms of interface, they resemble conventional parser games a great deal, with the notable exception of being real-time instead of turn-based. (Well, in a realm this big and this old, I expect there were turn-based variants, too…)

I’ve heard of them, but never played. How generally does an action by one player trigger changes for the other player in a text-based MUD?

MUDs are generally more RPG-ish as well as real-time, so more mechanical than story-heavy? You might attack someone else, or give them things, or follow them, whisper to them, that sort of thing. There might be a bunch of actions that have no mechanical effect but are just for expression or role-play and print out a description that the other players see, like dancing or singing or jumping or tickling or whatever.

I generally recommend the Discworld MUD if you want to poke around at one a bit: it’s based on Terry Pratchett’s work so it’s silly, it has a good tutorial/starting area that you can either zip through or spend an hour plus poking into every corner, it has one of the best parsers I’ve ever seen, and it’s (in my experience) just more “dense” with description and stuff than most MUDs: you can spend hours just wandering around looking at things and watching the random room event texts even if you’re not into the grindy gameplay (MUDs tend to be designed for people who play them over years of time, so…).

Thanks! I’ll give it a whirl.

Guncho was built quite awhile ago that uses Inform 7 to make multiplayer games.

Huh. Interesting. The wiki link is broken, but I can see a little bit of how this works.

I recall reading a while ago that some parts of the wiki were retrieved using the wayback machine and put up online on Github and in a “realm” called Guncho Helpworld. (Don’t know if the content is the same in these two versions.) 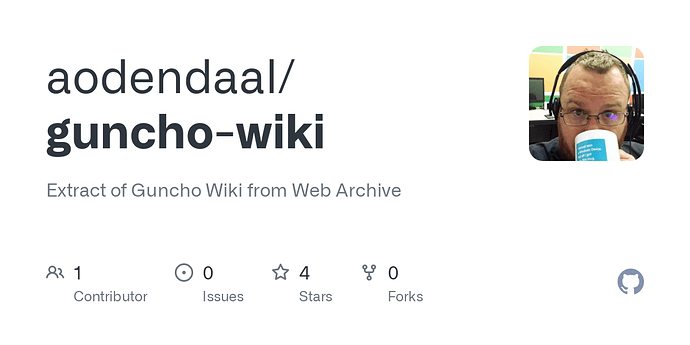 Extract of Guncho Wiki from Web Archive. Contribute to aodendaal/guncho-wiki development by creating an account on GitHub.

Just to let those interested in Guncho know: I’ve cannibalised the Guncho Wiki and used it as a source for a new realm called “Guncho Helpworld.” The reasoning behind this is that being a total newbie at MUDs when I started looking at Guncho, having the help wiki down was a major obstacle. So by creating this realm I’m attempting to make the Guncho site self-documenting. It’s got to be the most boring world ever: simply a single room with pages from the wiki made over into “posters” in an exhib…

Jason Dyer recently played a parser game called Medieval Adventure where two players are taking turns and competing to gather treasure on the same map. His article is an interesting read - the game has a few design problems.

Also linked in that article is this list of multiplayer text adventures on CASA. They’re probably all parser-based given the dates listed, though I’m not certain.

That’s really useful! Looks like attempts at multi-player parser sort of died after the 80s, perhaps because MUDs replaced them, or because they are generally really awkward.

If nothing else, it’s a cool coding exercise to try and write 2 separate Inform games that “talk to” each other. We’ll see if it’s worth anything.

I don’t believe anyone has written a game taking advantage of it, but TADS’ Web UI permits multiplayer parser games to be developed. Instead of two games communicating with each other, the game runs on a server with multiple clients talking to it via web browsers.

I’ve poked my nose around the API. It looks like a considerable amount of work, but it’s there.