Just wanted to let my IF peeps know about two upcoming projects I’ve got in the works.

The first, Ice-Bound, was just announced today as a 2014 IndieCade nominee (woo-hoo!). Co-created with Jacob Garbe, it’s an experimental interactive narrative for an iPad and a printed book. It tells a nested story (inspired by people like Borges and books like House of Leaves) about a digital simulation of a long-dead author, and your attempts to help him finish an incomplete novel of doomed polar explorers.

Rather than the interactivity being an “embedded-in-world” approach, where you play a character making choices from moment to moment (like with parser IF or CYOA), here you’re acting more like a sculptor, seeing the whole story at once and watching how changes large and small affect the course of the narrative. You do this while having a dynamic conversation with the AI author, and you can change and alter your relationship with him across the course of the game. So it’s a little like 18 Cadence mashed up with the text realization of Prom Week and the deep characters of Blue Lacuna… how’s that for a (confusing) elevator pitch?

The other project I’ve been working on lately is called Hollywood Visionary, and it’s a book for Choice of Games! In this (rather different…) story, you play the founder of an up-and-coming independent movie studio in 1950s Hollywood, shepherding your first project from initial pitch through pre-production, filming, post, and release. While making decisions about your movie, you’ll also have to juggle your personal relationships, feuding actors, and the specter of a new congressman with an axe to grind looking for subversives in Hollywood… I’m really pleased with how this one is turning out. It’s going to be a ton of fun with a lot of pathways to different definitions of success and failure. I’m also trying to make it incredibly inclusive, with many options for character expression and identity, and (for instance) romance options that can be traditional, subversive, combinatorial, platonic, or ignored entirely.

You can keep tabs on Ice-Bound and watch our awesome trailer by visiting the Ice-Bound website. (We have some more exciting news soon, so sign up to be notified to stay in the loop.) Hollywood Visionary is still a work in progress, but once it gets closer to release, it’ll be announced in the usual places.

P.S. Spring Thing 2015 will happen, although I’ve been thinking about possibly making some changes to the format. Will probably start a discussion topic sharing my thoughts here in a week or two.

P.P.S. I promise I will make parser IF again someday. In the meantime we can all spend the next few years solving Hadean Lands. 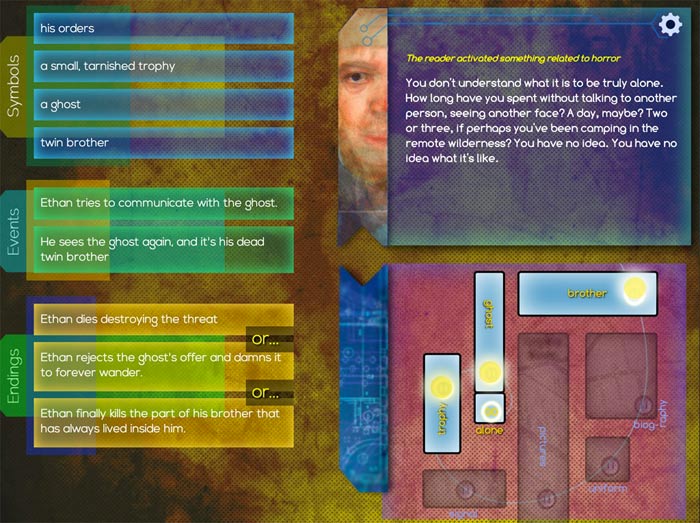 Hollywood Visionary will not require an iPad. It will be available on Windows, Mac, Linux, iOS, and Android.

(I think Ice-Bound does require an iPad, but I’m not sure about that.)

Ice-Bound is iPad only at launch. We need something with a camera to interact with the physical book, and we’re focusing on a single platform for launch for our own sanity. But we’re hoping post-release to do a version for Android, and possibly eventually one for web-cam enabled computers, too.

combining a printed book with an iPad app […] procedural generation and augmented reality […] inspired by the fractal narratives of Borges, Danielewski, Calvino, and Nabokov

combining a printed book with an iPad app […] procedural generation and augmented reality […] inspired by the fractal narratives of Borges, Danielewski, Calvino, and Nabokov

SOLD
(but not enough to buy a device just to run it, alas)

Excellent! Good luck, Aaron. I’m actually (finally) entering an IF competition, so I’m happy to hear that Spring Thing 2015 will be happening as well. I can’t wait!