Tundra - A short, unfinished game from 1998 by David Dyte

While going through some old files, I came across a short - very short - unfinished game by David Dyte called Tundra that I was helping him test. David has kindly agreed to me uploading the game to the IF Archive, “if it’s bundled with a readme explanation of the alpha-test nature of the thing, and why it’s been orphaned”. I have just done so, so it should appear hopefully appear in unprocessed soon.

Given that it never got through testing there are of course bugs - I’ve included my old testing notes in the upload - and like with many other Inform games of the era interpreters may complain about invalid objects. But I never encountered anything game-breaking myself.

I found the game quite charming. I hope others will too. 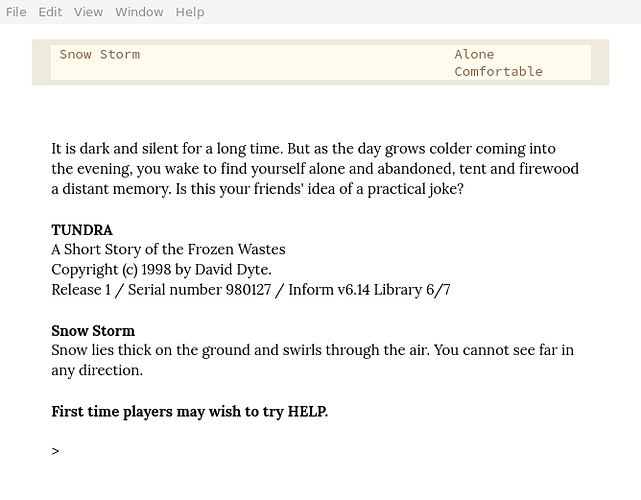 (This is actually the second screen of the game, but I think it’s much more representative of what the game is than the first one.)

At the time of writing, the game is now in the unprocessed directory as tundra-alpha.zip. Since there doesn’t seem to be any directory for unfinished games, I assume it will eventually land in games/zcode.

Update: The game is now in games/zcode