I’m trying to go through and play the last couple dozen IFComp games I missed the first time I played through all of them. There are two which I really have no clue how to play that share the same system: java.

Does anyone know a good way to emulate this or get these to play? Hopefully in sandboxed form in case there is old bad stuff in there.

There are a few other games I think are lost forever. The two that come to mind are the ARG Sun and Moon (which heavily featured java feels spread on different websites, and I don’t think the Java was captured by the wayback machine) and Hanon’s Final Girl.

Yeah, sadly Final Girl got mangled in the database beyond repair after Failbetter stopped providing support, making it unplayable.

I really want to re-make it in a new system and have prototyped it. I even have art I commissioned! Just have to jump in both feet sometime.

Probably the most straightforward way would be to install a Java JDK prior to version 11, and use appletviewer to run the applet.

Well, I just took a look at Tentellian Island in IFDB and it’s a mess of loose files. It could be assembled into something workable as the source code is there.

appletviewer works for Goofy though: 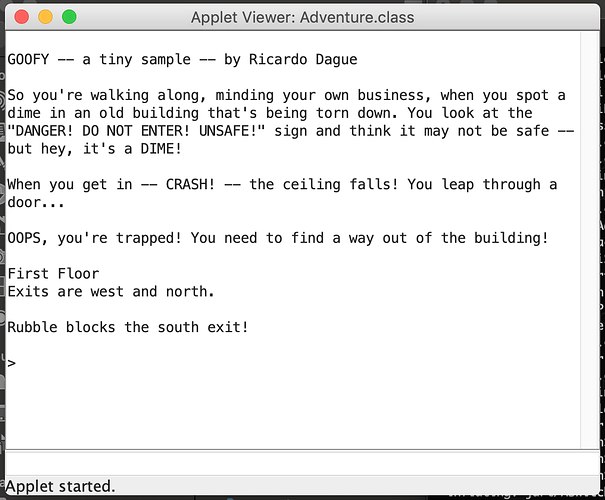 I don’t know much about appletviewer but I’ll try it out!

I feel lucky to have been able to play it in its original form-- it was a great game for a novel system.