So there was a discussion about the direction of Theory Club. I think “we” all have an interest in IF Outreach and having open/public discussions/panels on a regular basis. We have all of our local IF meetups. We see forums at various conferences. But we’ve struggled to maintain public discussions online.

Feel free to add to or correct the above statement.

One of my personal frustrations of theory club, mentioned on ifMUD, is that I’m a little intimidated by the in-depth knowledge some people have of all IF games. Some of the theory club discussions get reduced to people saying things like, “so like game X” and someone else saying “or like game Y and the scene where the foo garbles the rondrick”. Which is to say, the conversation might as well be in Martian or Klingon for a layman to understand (or an IF fan who is not quite as steeped in IF gaming lore). So one suggestion I made was to have some sort of online ready-reference of game transcripts so as people converse, they could pull up the exact place in a transcript that’s relevant to the conversation. It would also be good, during such things, to sloooow down and actually walk through the transcript to identify the relevant parts.

The other thing seems to be (unproven?) that some people are turned off by having to log into ifMUD. This is probably going to become more and more a problem over time. The ifMUD is probably already quickly becoming a fairly unique community of people that started playing with IF in the 90’s. We’re a long ways aware from those days and anyone new to the Internet and IF is likely going to be used to new tools like Google Hangouts, Facebook Groups, and my current favorite Slack.com.

So I’m willing to take on a (possibly shared) facilitator role, with help. If we had some initial research and planning done, we could host a theory club discussion on slack.com. Slack allows for code snippets and file/image uploads, so there’s a direct way to share relevant information in the UI. There are native and web apps. The only major downside is that it requires invitation by the group owner. I setup a textfyre.slack.com account, but you need a plover.net, textfyre.net, or textfyre.com email to auto-register. I can add other domains, but I’d only add ones “we” control. Otherwise I need to add people ad-hoc, which is cumbersome and somewhat defeats the purpose of an open and public discussion. But Slack is really nice for this sort of thing, so maybe we can get over that hurdle (or not).

So my proposal is to have a “test” theory club discussion (not tomorrow’s obviously) sometime in the future on Slack and see how it works.

I would not be facilitating the way Emily does. I have nowhere near the expertise she does. I would be a participant and the guy that makes sure a reasonable pace is maintained and that points are made clear for everyone.

Is this workable? Interesting? Not at all?

Here’s a screen shot of the Mac client. 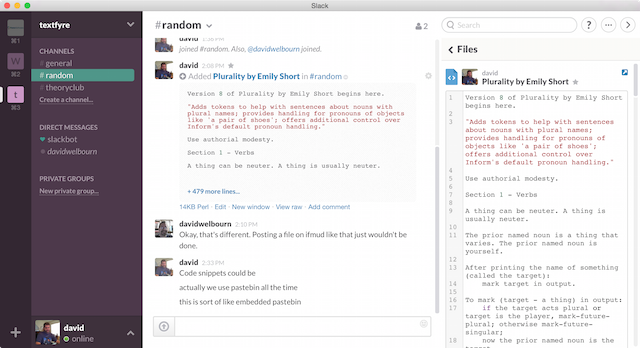 It looks nice. Assuming it’s straightforward to write comments/posts, it seems like maybe there’d be less of a learning curve than with ifmud.