The Spicy Meatball Saves The Day is a lightly comedic adventure, in which players take on the role of a superhero who gets distracted by a house fire on their way home from fighting crime (trailer).

I initially created The Spicy Meatball Saves The Day as a last-minute entry to the Linux Game Jam earlier this year, but today re-launched it with new audio, gamepad support, improved keyboard controls and lots of bug fixes (dev blog post).

Gameplay can take a little to get used to (definitely start with the in-game “readme”!), and the engine is still in-development, but I think it’s providing some fun experiences already. If anybody checks it out, I’d love to hear your thoughts 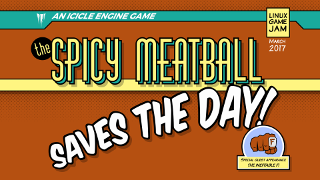 Could there be a front page option for the controls. Also WASD maybe?

Could there be a front page option for the controls. Also WASD maybe?

The engine’s menu implementation is temporary. Eventually I’ll be replacing that with the GUI code I’ve written for the in-engine editor and will be able to offer a lot more functionality. I’ll definitely be updating Spicy Meatball to make use of future engine enhancements (like input layout screens, support for custom bindings, in-game sensitivity options, improved VR support, etc.).

I know I can also do QWERTY, AZERTY and DVORAK bindings that give the same positions as WASD without conflicting with each other, but I’m not sure about other keyboard layouts (the cursor keys are more or less universal).