If you haven’t played my new game yet because you were busy with IFComp, then go play it! This is the longest game I’ve written, and I’d love to get more feedback on it, so once everyone has recovered from the recent surplus of fabulous games, please give it a whirl.

First must come all the thanks: To my incredible testers, who have such a hand in shaping my games that just calling them “testers” does not convey the extent of their involvement. They are: Nils Fagerburg, Jade, Zed Lopez, Travis Moy, Olaf Nowacki, Eva Radke, Rovarsson, and Graham Walmsley. I have to call out @zed AGAIN, because after testing an early draft, he advised me to make personal quests for all the PCs, as he felt they were more like NPCs in the Duchess’s story at that point. He was entirely right, so I went back and added nearly as much game as was already there. The game is far better for his advice. And all my testers contributed substantially to the story, the polish, and the playability. Thanks also to @kamineko, who I repeatedly bugged to help me make decisions about gamifying this poem.

And thanks most of all to my husband, Tom, who continues to put up with my IF habit so nicely, even if he does heave many long sighs when I’m checked out of real life while working on a project.

Everyone is probably used to poem-inspired games from me now, but this one has been squatting in the back of my mind and poking at me for a long time. Robert Browning’s justly famous poem My Last Duchess (such violence and horror dressed up so beautifully) is a perfect setup for IF because it gave me the central story, the climax, and the ending neatly wrapped in a bow. The poem is based on real people, so the time period, setting, and basic facts of their lives were available to me. But the game is based on the poem, not the actual history. I filled in some of the gaps in the poem with true history, and some with my own invention.

I knew that the Duke and Duchess could not be the main characters, because it would be nauseating to force the player to play an abused child bride, or her abuser. I needed characters who would be privy to everything that happened; and given the Duke’s wealth and stature and the size of his estate, he probably had many, many servants who would hear and see everything. So it was pretty obvious that the PCs would have to be servants. I tried very hard to diversify the PCs; I wanted distinctly different personalities and voices that had only one thing in common: the experience of being powerless in the face of a powerful and dangerous man.

It was important that art play a central role in the game. The real Duke was a major patron of the arts, and the poem explicitly centers on the Duke’s ownership of art, most specifically the painting of the Duchess. The painting is real, and serves as the game’s cover art as well as being described at length in both game and poem. It is attributed to Alessandro Allori, and is currently housed in the North Carolina Museum of Art, if anyone close to it wants to visit it. The painting, along with the rumor that the Duke had killed little Lucrezia (a false rumor, according to most historians), inspired Browning’s poem and hence the game, so I’m pretty fond of the painting. And I had a grand time researching the artists of the age. I had outlines for whole sections involving politics and music as well, but cut those as I felt I could not make the game any longer just because I wanted to include castrati and Huguenots.

A word on the setting: even in 1560, the Castello Estense was very old and had a rich history. The map of the game is loosely based on the real castle, which still stands in Ferarra as a museum, and still has the many murals the lords of Ferrara commissioned. To my knowledge, none of them are by Titian like the one in the game, although the real Duke did commission Titian for paintings. The castle of my game is a dark, dangerous place ruled by predatory and powerful men. No doubt such houses were commonplace at that time, but I have no idea if the real Duke’s castle was a particularly terrible place or not. The poem suggests a narcissistic, smug, paranoid man who is so powerful that he can kill his wife and then brag about it with impunity, and the Duke of the poem surely ran a terrifying household.

The game was fun to write, and it was a bitch to write—keeping the same location but changing the PC multiple times was a really hard job, and if I did it again I’d code it differently. C’est la vie. This was the first game in which I experimented with a flexible conversation system—a topic-based one—and I have mixed feeling about the results. There are pitfalls in implementing too many topics for such such a system: you run the risk of allowing the player to ask about too many things unimportant to the game and detracting from the plot, and of course it’s impossible to implement everything. On the other hand, keeping the topics too narrow is unrewarding for the player, who may get tired of hearing “I don’t know anything about that” while trying to get information about things. Only the author knows what is tangential and what is important, so I found this to be an extremely difficult task, and the thing I’m least pleased with about the finished product.

Thanks to @Ruber_Eaglenest for doing the work to host ECTOCOMP, and thanks always to this wonderful and helpful community of people who keep this special little gaming niche alive.

I could not make the game any longer just because I wanted to include castrati and Huguenots.

Of course, you already have a game sprouting in the back of your head where you interweave these in interesting ways…

(A Catholic castrato spy under orders of the Pope infiltrates a secret Huguenot group. The leader of the group and the castrato fall in love and elope to Moorish Andalusia.)

(Did I get my historical periods wrong there?)

(Did I get my historical periods wrong there?)

Who cares? Since a person of such eminence as Robert Browning just made things up, I think we can just claim we are acting under his aegis with whatever we want. I think we can throw Browning in as a character despite his not having been born for a few centuries.

No, I’m hoping for SeedComp to get off the ground so I can exorcise some of the ideas that keep squittering around in my mind but won’t let me wrangle them. Maybe someone else can housebreak those ideas properly.

I really enjoyed playing this. The house was beautifully described and I enjoyed exploring it. It seemed like a character in its own right.

Since we’re getting time periods wrong, did you know The Marquis of Ferrara is a roleplaying game? It is! It’s a small press one and I don’t often get the chance to mention it, so I’m taking this one. 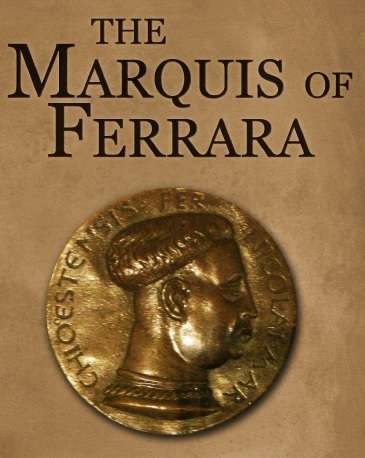 A story game about passion and politics in Renaissance Italy. The Marquis of Ferrara is dead.  Murdered. Niccolò d’

Congratulations on second place! The setting was beautifully realized. It was a trip playing a game set in a place close to where I’m from, in a building I’ve actually visited.

did you know The Marquis of Ferrara is a roleplaying game?

I didn’t know about this! I’ll have to check it out. Thanks so much for your help in testing-- it was just a mess before you guys got your eyes on it.

in a building I’ve actually visited

If I ever make it to Italy, Ferrara and the castle are definitely on my must-see list. What a history. Thanks for playing it!

This was the first game in which I experimented with a flexible conversation system—a topic-based one—and I have mixed feeling about the results. There are pitfalls in implementing too many topics for such such a system: you run the risk of allowing the player to ask about too many things unimportant to the game and detracting from the plot, and of course it’s impossible to implement everything. On the other hand, keeping the topics too narrow is unrewarding for the player, who may get tired of hearing “I don’t know anything about that” while trying to get information about things.

These two things are exactly what I ran into with Color the Truth, where I kept the rooms the same but had five different view points for them, and had a topic-based conversation system. Both of those are really rough! I think you handled it well though.

How did you decide on what kind of interactions the player should have with the story? I mean, how did you pick what roles the player would act in and the things they would do in those roles? Some seem obviously inspired by the source but others don’t. You touched on it above with not wanting the duke, but I noticed that the social positions and emotional tone of each PC were different.

I wish I had picked your brain about the topic-based conversation before I wrote this, as it really was beastly to make decisions about topics.

The first character I knew I would have was the night chamberpot maid Sofia, because I am a small child at heart and I had to have chamberpots. That’s the character who would hear the murder late at night, and this would obviously be a very low-level servant. Then I needed someone to actually see the body, and it would have to be someone in a position close to the Duchess: a high-level servant. So Emilia the lady’s maid was born there, and I decided to start the game with her too for a sense of symmetry. And she just turned out to be kind of awful on her own.

I needed someone to pick the cherries from the poem, and since I also needed a white mule, the groom Angelo filled both those needs. Since Emilia was so unpleasant, I made Angelo sweet and relatable. I thought a boy near the Duchess’s age would make a perfect target for the Duke’s jealousy.

And of course I had to have the making of the painting be a big scene, and so Luca the painter’s assistant came to be. Since everyone else was so hopelessly stuck in their roles, I thought Luca could hope for a brighter future, as he had such a marketable skill.

In the first draft, all the PCs were just servants doing their jobs until Zed prodded me to let them have their own lives, and their personalities really crystallized when I gave them their own quests. Zed also thought the butler Zago was a scary character and that he should play a bigger role, so I fleshed him out more into a genuine monster. It never ceases to amaze me how much testers can shape games for the better if you just listen to them.