The pinnacle of interactive fiction

Nothing before or after can come even close to this combination of form and content.

(This post was inspired by this thread: Old school adventures, new school IF, and player’s bill of rights - Playing / IF Reviews and Essays - The Interactive Fiction Community Forum (intfiction.org)

I played it in the 90s, and I remember just gaping at the screen when it was over. It was A pinnacle for sure. Was it The pinnacle? Not so sure, since I’ve had many moments like that. I know for sure that S&W was one of the games that eventually made me pick up the keyboard and start trying.

Note: since not knowing about Spider and Web is an advantage for new players: if you haven’t played it, I recommend ducking out of this thread.

Believe it or not, this is one of the post-Infocom games that I have played. It was just last year, which is later than other such games I have played (Anchorhead, Curses). I wondered: “Who is this Andrew Plotkin person I keep hearing about?” It was his second-highest rated game after Hadean Lands (which I have since bought), so I downloaded it. Didn’t know anything else about it.

I really admire its subversion of formal expectations, particularly the player’s relationship with the parser. I also tend to prefer problems that require intuitive leaps over those involving general mechanical or logical prowess. They tend to engender more satisfying “ah-ha!” moments. Spider and Web offers up a doozy.

I’ve thought about going back to some post-Infocom IF once I get through with my playthrough at Gold Machine. I think this one would be fun to write about.

I wondered: “Who is this Andrew Plotkin person I keep hearing about?”

When I first came here last year for coding help, I was floored that Plotkin was showing up in threads helping newbies, since I’d been playing his games for decades. It was like joining an online forum for writing novels and having Neil Gaiman show up to help. I tend to think of writers like that as too busy communing with their muses and producing masterpieces to explain the ABCs to the little guys. But happily, I was wrong about that.

I replayed Spider and Web (up to the ‘main event’ and a little beyond) to see if I agreed with your sentiment.

I think there are multiple ideas in the game that are great.

I think one of the best is that it has features making the game easier while letting the player still feel clever. The interrogation method is basically a tutorial; it:
-gives you hints
-shouts the walkthrough at you if you mess up too much
-uses ‘undo’ for you
-reacts to your input and gives you feedback on how you’re doing

A lot of games that do that in a nice way come off as cloying or talking-down-to-you (I got that feeling a bit from Dreamhold, Blue Lacuna, Counterfeit Monkey and Bronze, even though all are excellent games that are popular, so maybe this hand-holding isn’t bad?). But this game is nice to you in the meanest way possible, framing the hints as torture.

I think that’s why, for me at least, the game really drops off once the big reveal happens. I had no idea what to do after that when I still played and even just now basically gave up after I retrieved my gun. I used the walkthrough back then. I can imagine that the original design philosophy was to make this the ‘real game’ that players would work their butts off to solve, but I wonder how many others, like me, only really played the first half and quit or used a walkthrough for the second.

The main puzzle is brilliant, and it’s hard to think of an IF game with a more shocking AHA moment (maybe Adventure with the dragon is the first I can think of that compares).

I think the level of implementation is excellent in this game; like I was talking about in the old-school new-school thread, the difficulty here comes from the system, not the parser (although there are a lot of terms that need disambiguation).

The writing is also good in an Orwellian way, as in it literally reminds me of reading 1984 or Animal Farm (in the dialogue).

I’ve specifically emulated this game several times, both in the ending of Grooverland (which doesn’t have nearly the same impact, sadly) and more recently in my Impossible Stairs (with the reveal of Uncle Rob), since I read Zarf before saying that he structures games and/or puzzles around big moments and tries to figure out what path the player needs to take to get there.

With all that said, it’s actually not my favorite overall game; the devices can get fiddly and like I said the back half didn’t really do it for me, but I can only make those criticisms because most of the problems that plague other IF games aren’t here to criticize. Out of other Zarf games, Shade really freaked me out in college late at night, and Hadean Lands became almost an obsession for me, while So Far resonated with me emotionally more than almost all other IF games.

I definitely would rank its best moment as perhaps the best moment I’ve had in IF, though.

You are absolutely right.

I actually condensed the game down to everything that happened before THAT… All the things that happened after THAT were great but not brilliant text adventure things, but they could bask in the sublime light of the brain having just experienced solving THAT.

I also do not think it is the best IF piece, but I stand by my (modified) claim that Spider and Web is the best use of the parser medium, with its player/PC/ narrator divide, to lead the player through a story with an incredible cathartic moment. That she has to make happen herself!

I stand by my (modified) claim that Spider and Web is the best use of the parser medium, with its player/PC/ narrator divide, to lead the player through a story with an incredible cathartic moment. That she has to make happen herself!

I think I can agree with that

You are wrong, because it’s…

Also, this debate is not offtopic.

I searched this picture below on IFDB while thinking about the original post, and it made me think about how Trinity has a lot in common with Spider and Web (in terms of fair puzzles using complex systems). Although I never had any clue what was going on in the desert part at the end lol 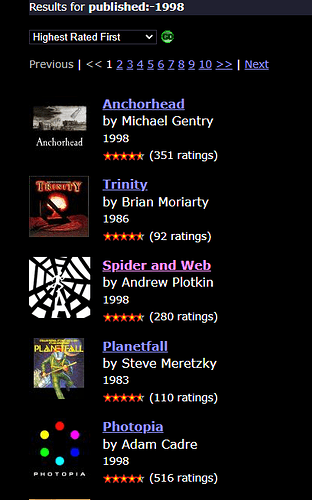 Those are really nice numbers.