In the interest of getting as many votes for TALP as possible, I thought I’d do what I can to help people go through it quicker.

And while maps are spoilers, sometimes they are soft spoilers that can help reaffirm that, no, you can’t get by NPC X, so you can focus elsewhere. And that saves mental energy for this game and for the rest of them!

Anyone who wants to, I’d be glad if they added a map of what they’ve played. Authors are encouraged as well. This is just about getting resources out there, to help people who procrastinated (like me!) make up more ground than they’d hoped.

Authors, if you’d rather a map not be here for any reason, let me know. The list is below. When authors included maps for their games, and I notice it, I’ll link to them. I may include maps even when there’s an in-game map, just for reference, or to let people know how big a game is, if they’re curious.

Here is a map for Kobold in Search for Family. 14 rooms, though one is the victory room without any text. 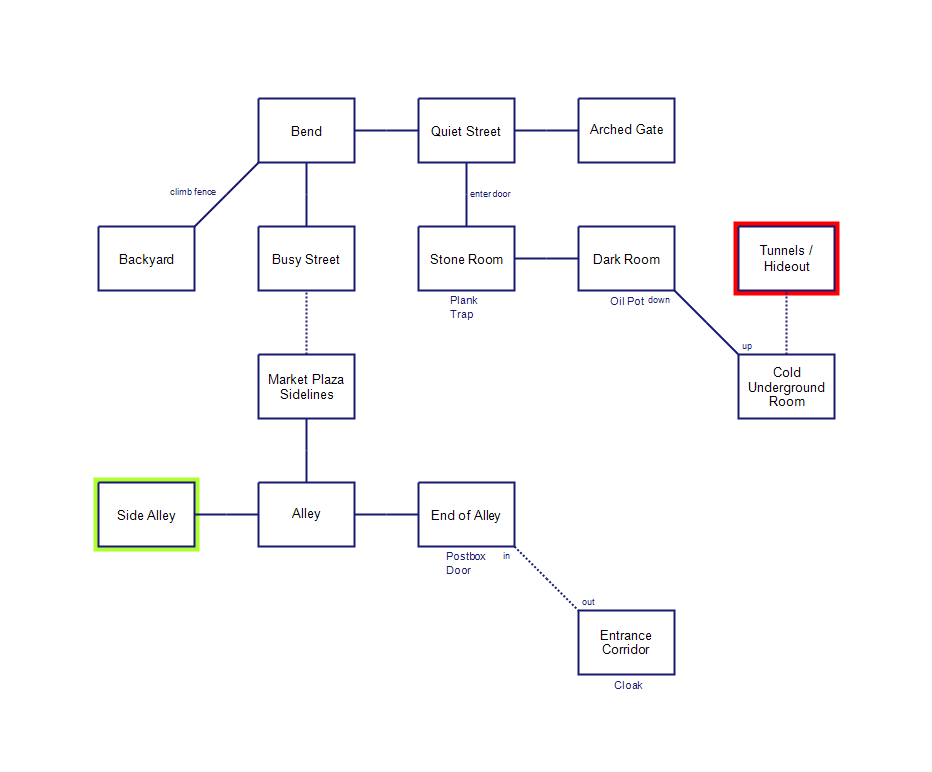 The Lonely Troll has an in-game map, and the command is, surprisingly, MAP.

Barry Basic and the Speed Daemon has a map displaying the player character’s position above the text.

Dessert Island has a sweet adventure map next to the text.

Wizard’s Club. You may wish to type VERBOSE if you forget the exits, though there’s no way to die, and the map isn’t big, and with 9 rooms, it doesn’t branch very much.

Library Quest. One room is dark, hence the notch in the upper right. I thought about showing which room hid a spell you could read, but that might be too spoilery. 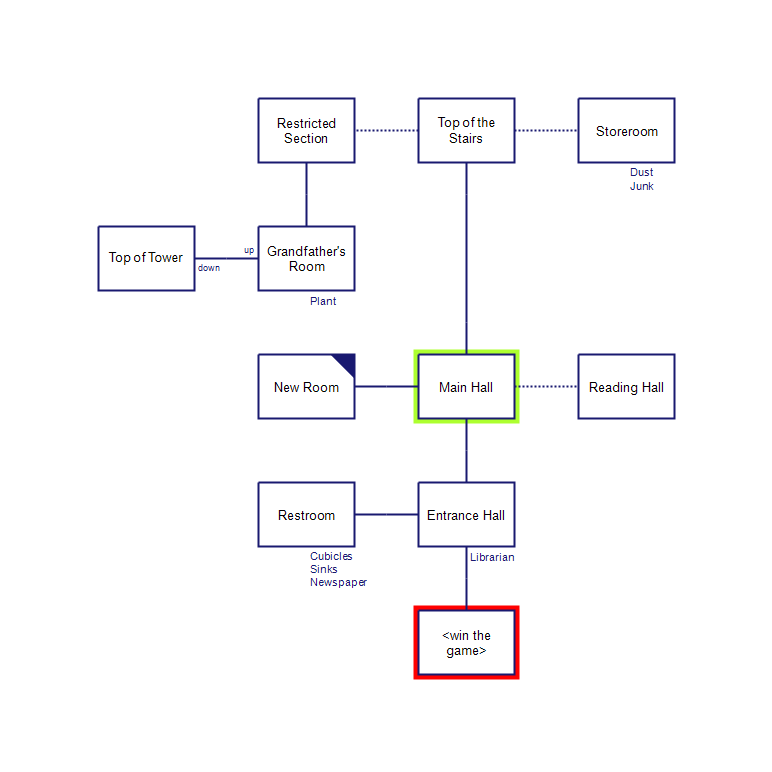 I’m doing maps and solutions for all the games for submission to CASA when the jam is over. So far, I’ve finished:

Do you want me to add the maps for the ones that you haven’t already added?

Yeah, that’d be awesome! I was actually considering asking you but wasn’t sure how much you did. Your work is great but I wouldn’t want you to feel obliged to be the guy.

I’d actually appreciate someone else doing what they can, as I’m a bit behind on judging, and I just had an idea for a ParserComp game I’d like to get ahead of the curve on. And a few of the games in the list, I haven’t looked at yet.

I’ll just add the links to the post you put them in. If you’re able to make one post per map, that’s ideal. Post them in any order you want, whenever you have the maps in the shape you want them in. 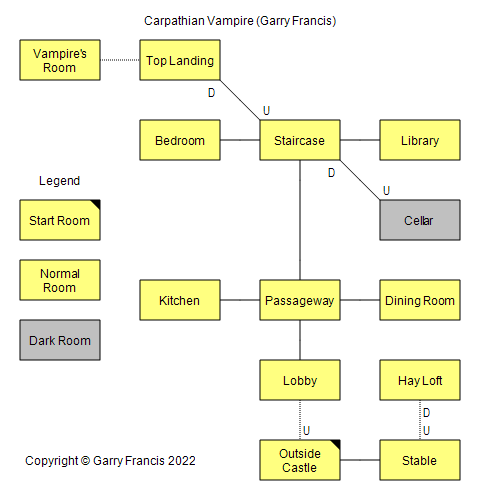 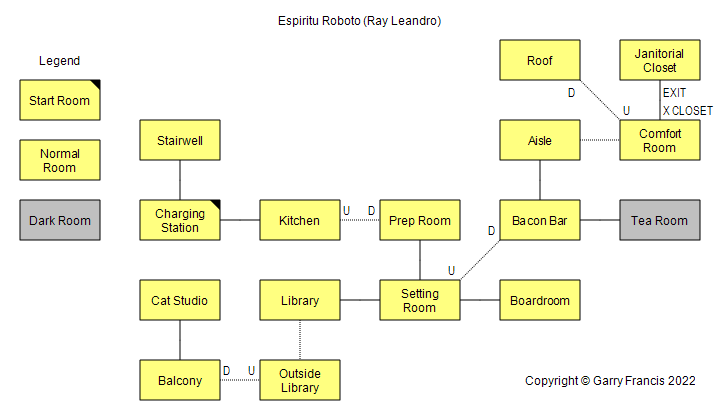 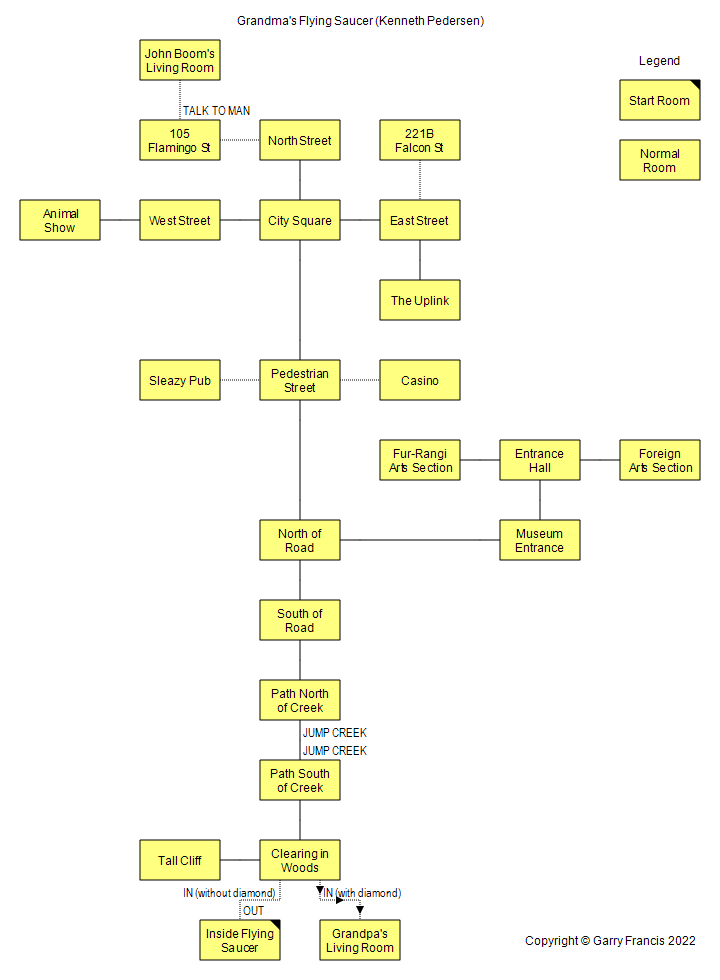 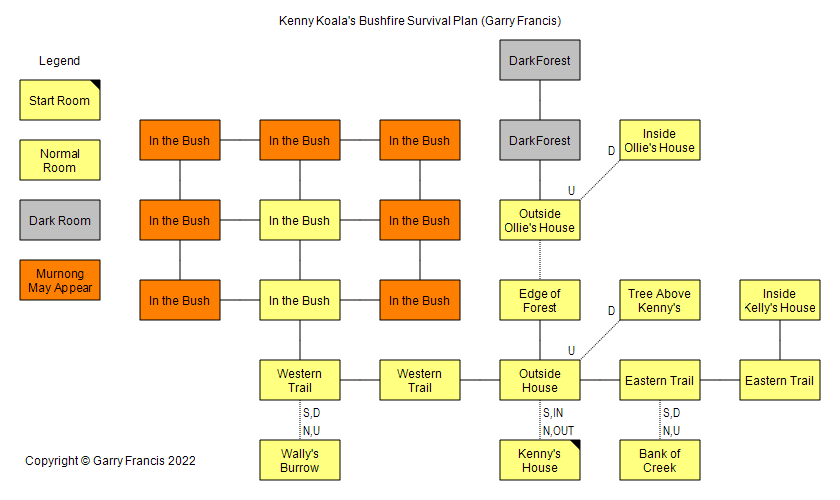 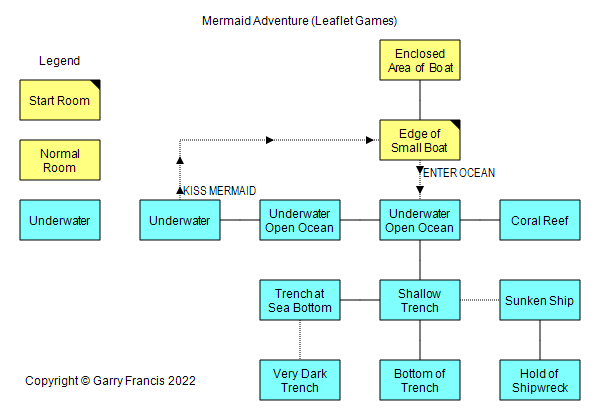 EDIT: Oh, no more than 5 consecutive posts are allowed, so I’ll try appending the others to this one. 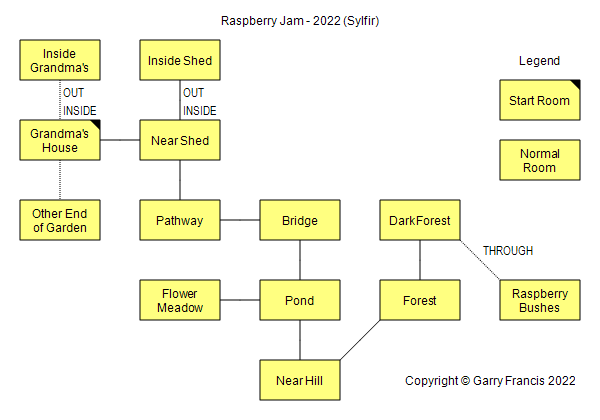 Map for The Spooky Mansion: 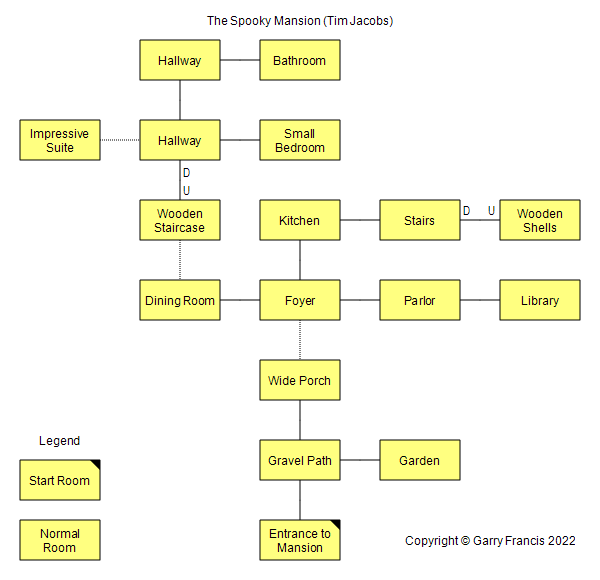 Wow! Lots of really good work so far! I was originally going to wait until you posted everything, but since intfiction has that limit, I guess I’ll drop thanks now.

So if you’d like to put these in separate posts, I’ll post right here so you can. But of course that is more busy work. Either way, I can link stuff if/when you’re done with your current document dump.

The only games I haven’t played at all are ‘CC’s Road to Stardom’ and ‘Sindrella’s Potions’. I’m hoping to get all of these finished in the next few days so that I can get my ratings finalised.

Map for CC’s Road to Stardom: 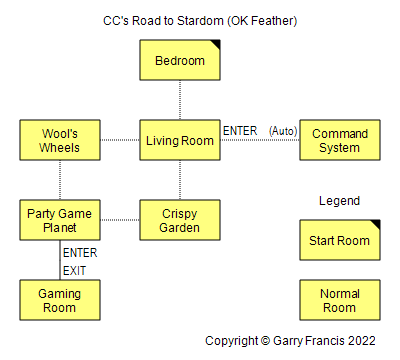 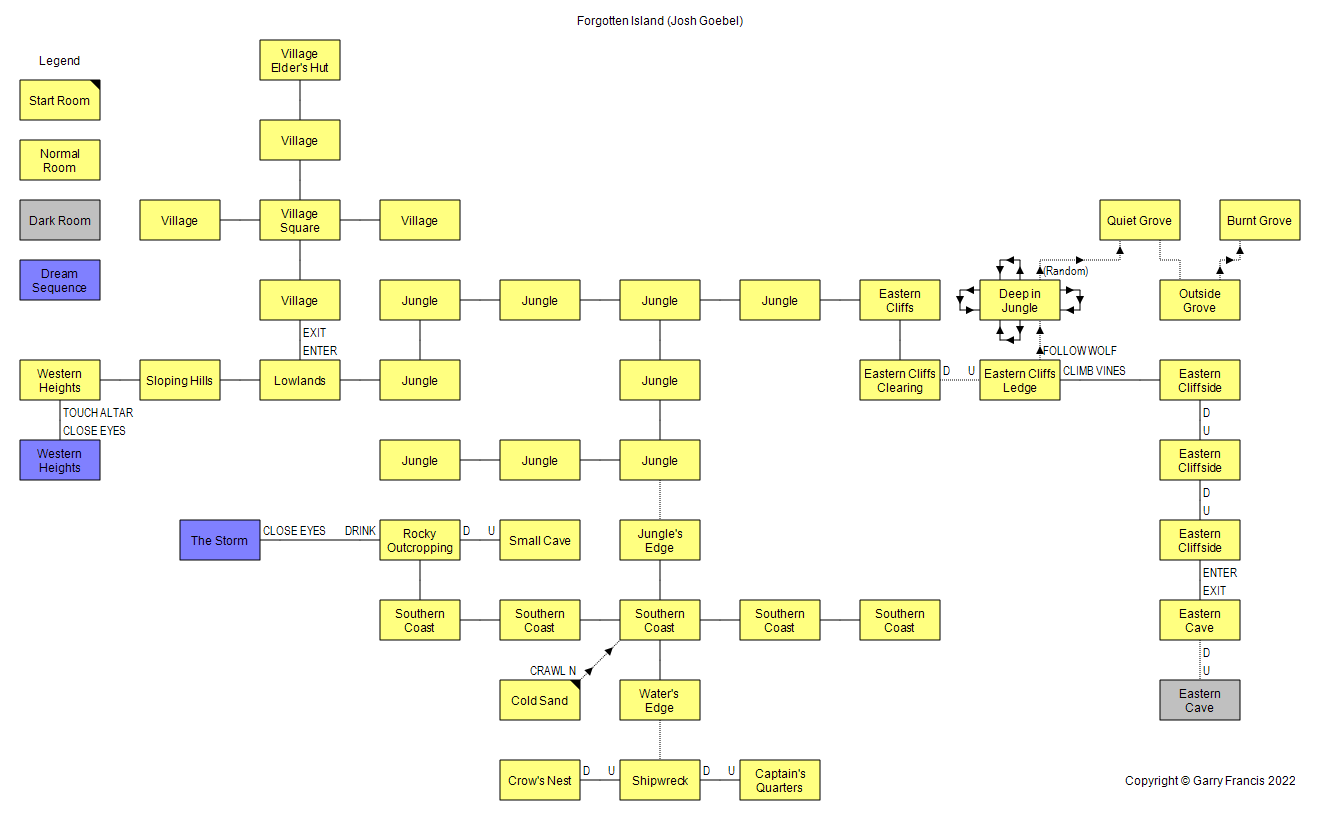 Map for Sindrella’s Potions. This is for version 0.1.5 (which is actually a later version than the original 0.1.5). The game is still a bit buggy, so the map may possibly be subject to minor changes. 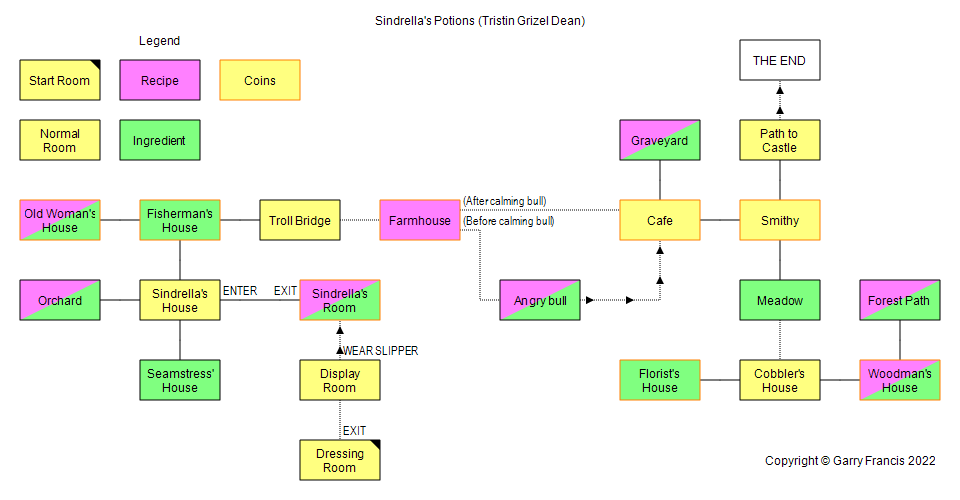 Map for The Lonely Troll: 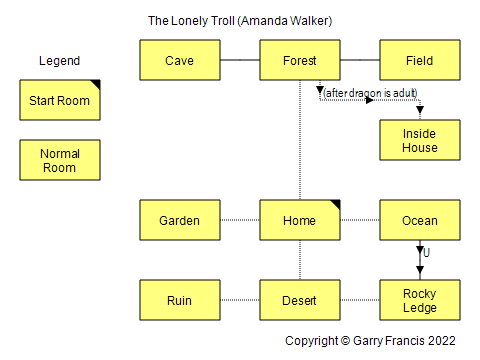 Map for Barry Basic and the Speed Daemon: 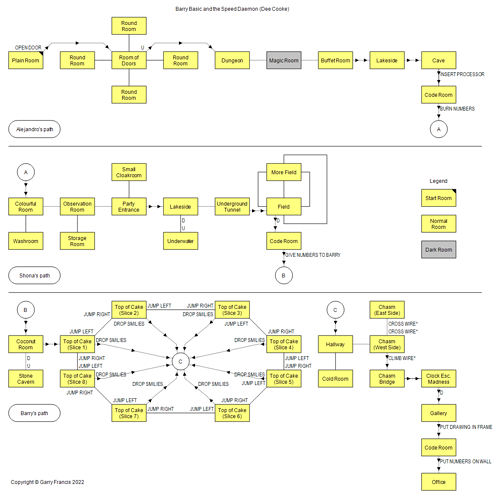 Trust me, the in-game map is MUCH nicer. 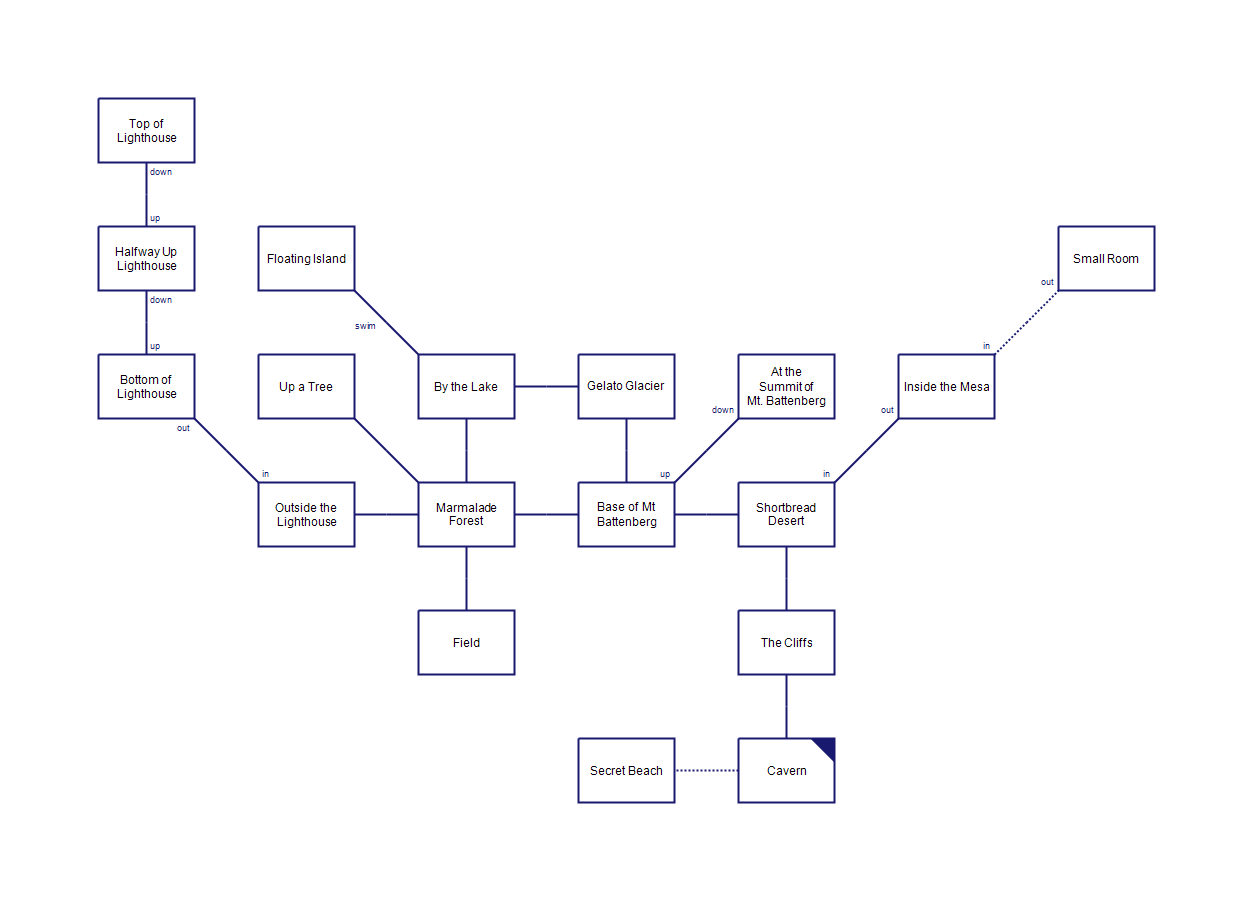 ~18 hours to go … we’re at 147 votes. Maybe we will break last year’s average, which would be really cool, since there are more entries!