System’s Twilight was a pretty fundamental game for me, like all the Apple II+ games, because it was a guy writing a Mac game. I always wanted to know how to do that. I left behind a whole bunch of Apple II diskettes with, it turns out in retrospect, attempts at writing IF games.

I played System’s Twilight and I remember something the author said, or wrote. That he was pretty proud of having come up with puzzles, but very proud of having invented a few new kinds of puzzles. And, I’ve seen a few of the puzzle types that were new in System’s Twilight pop up as mini games in PS3/4 “adventure-action” games, over and over again. They don’t even know where the “idea” they just had for the mini game came from.

Well, it was a really great Mac game. Kind of back when it was a Macintosh. Fool’s Errand, sure, but – answering it with I Have Whole Knew Ideas? Wow, that’s a mind. I am drawn to this mind, and what it is imagining, and I wish, I wish, I wish I wish, I could write a Macintosh program game. I don’t know how to do that. I started at the same time, with the Apple II+, in 1981. I just can’t get it. I am going to figure it out, some day.

Anyway. Too personal. What I want to say is, who else on here, played System’s Twilight, and just thought it was a great game?

And can we not #spoilers the ending, even though the game is really old? In this thread?

I am still trying to think about, in Swift, reverse-engineering Fool’s Errand, where you type letters and they appear like in Wheel of Fortune, in big white blocks, and you can redo and untype and if you type the right thing, BING! The reward happens. I am still trying to figure out, how to get any type of Mac OS do that. I sort of can do that, as of March 2022.

System’s Twilight – Zarf did that starting with the same hardware at about the same age as me? I still am in awe of that. Before he got tired of my new act, he was unsure why I kept talking about him like he was doing something I still thought was magic that I couldn’t figure out how to do.

I’ve almost got it, starting from scratch just from IF.

In retrospect, my puzzle ideas were less original than I imagined. Some good new variations on familiar puzzles, is what I’d say now.

The answer to “how I did it” is straightforward: 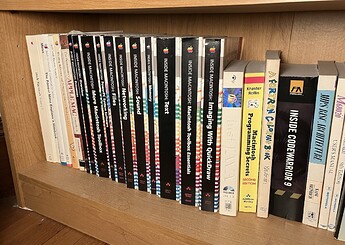 I have no idea why I keep all of these. They’ve all been thoroughly useless since MacOS X came around.

(The good news is that the modern equivalent of all that reference material is now freely browsable on Apple’s web site.)

I can click on the “spoilers” one in the body of the post and it takes me to a topic listing for a one-reply thread about some technical aspect of Counterfeit Monkey. So it’s doing something though what that is is very confusing!

On topic, yes, System’s Twilight is great! It was clearly riffing on 3 in Three, but was more clever and more cohesive. I played it some 20-odd years ago via a somewhat-shoddy PC emulator so I remember that giving me some trouble on one of the final puzzles.

There’s also a more recent riff on System’s Twilight itself called System’s Syzygy - it’s not as clever as the original, but still quite good fun in a genre that’s seen far too few entries (seriously, besides the Cliff Johnson games and ST, what else is there?) I managed to complete all of it except for the final part of the final puzzle, which I’ve been stuck on for five years or so - and this time I can’t blame rickety emulation!

I had a set of Macintosh programming in Pascal books, but I asked for them on birthday and Christmas never understanding how I would use them. There was no Pascal compiler. I got a bootleg set of mac diskettes with Pascal, but they never made a program a Mac would run. I was a confused adolescent.