Story file is too big

I was testing out including extensions, and after installing a new one and including it, the compiler is telling me the file is too big. I looked and the extension was 168kb. That seems gigantic considering that the standard rules are 12kb. The extension in question is Custom Library Messages by David Fisher, but I don’t THINK that I am looking for support for that extension in particular, so much as it is a question about how to get past this size limitation.

What is the error message?

The full error is below. If it helps, I just downloaded what appeared to be the latest release of Inform 7, and the about says it is Inform 7 for Windows (25th April 2013; 6G60). I also didn’t actually hit release, just the Go! button, but I don’t know the difference yet.

Packaging up for Release - Ran Out of Space
The application ran your source text through the Inform 7 compiler, as usual, and it found no problems translating the source. This process results in what’s called a story file, which is a program for a small virtual computer. Unfortunately, the story file for this source text was too big for that virtual machine: there’s just too much of it.

Inform can produce story files for several different virtual computers, and the one used by the current project can be selected using the Settings panel. If you are currently using the version 5 Z-machine, try trading up to version 8. (For instance, two of the worked examples on the Inform website are large enough that they can only be compiled to version 8.)

Change your setting as seen in this attached pic… 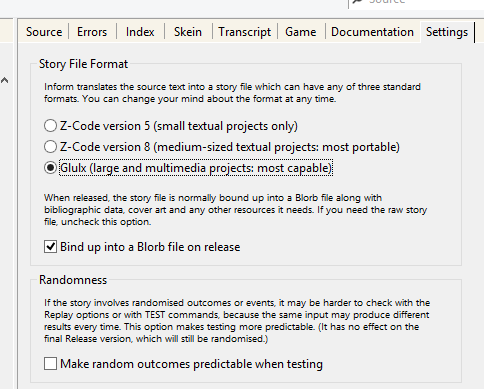 I looked and the extension was 168kb. That seems gigantic considering that the standard rules are 12kb. The extension in question is Custom Library Messages by David Fisher

This extension does a lot of text handling in Inform 7 that Standard Rules just leaves to the Inform 6 Templates that all Inform games depend on. I guess that explains why it is so much bigger.

(Also, you might want to know that David Fisher’s Default Messages and Custom Library Messages extensions are no longer maintained and in practice are superseded by the identically named extensions by Ron Newcomb.)

Aha, that extension seems to do the trick

(the Ron Newcomb one), but also changing the settings was key. Thank you for the recommendation.