Skybreak! version 1.4 is now out!
You can access the new version of the game on the ADRIFT or IFDB sites, or by clicking here for online play or here to download it.
Like all new versions of Skybreak!, this is the largest one yet, featuring nearly 100 new worlds across 50 systems, most of which are so rare you’ll only see 1 or 2 in a given playthrough.

And some screenshots of some of this new stuff in action 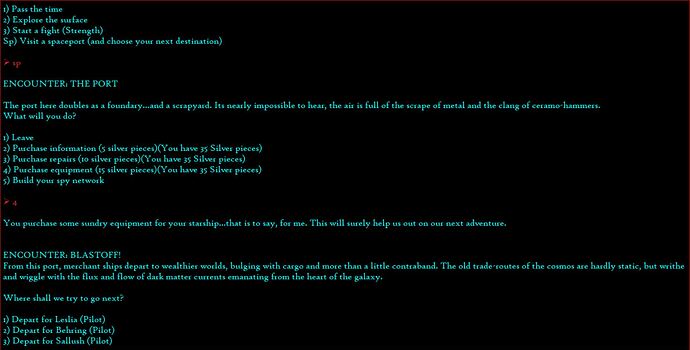 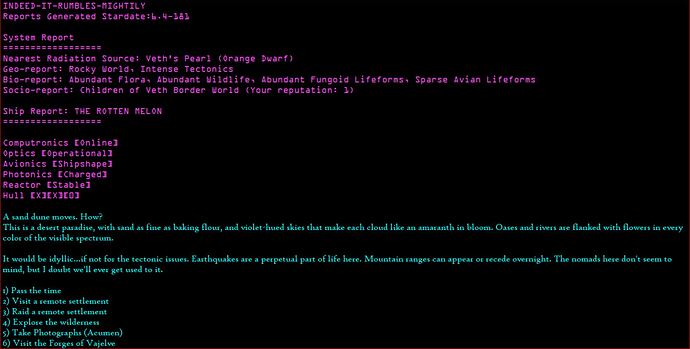 I’d also like to share the new plan for skybreak!, because of course version 1.5 is going to be even bigger than version 1.4.

Previous expansions have focused on improving quality of life for the player, and adding more encounters and worlds. Version 1.5, which I expect will be out in the summer, will add a fairly modest number of new worlds (perhaps 10).

It will, however, greatly expand the number of pure CYOA and Roleplaying decisions your character makes, as a way to make the galaxy feel more alive. “Passing the time” or “drifting along” on certain worlds will open a new chapter in a running story involving your character…one of five, randomly selected at the start of the game based on your character’s background and talents. It is my hope that this adds a small degree of continuity to what is largely a game about disconnected ping-ponging across the multiverse.

Additionally, I plan to add ~250 non-repeatable storylets that trigger randomly based on the activity your character chooses on a particular world. Many of these will focus on the deeper lore of the cosmos Skybreak! is set in (and if you thought this place was already weird, strap in!). They will afford the player more room to make choices based purely on role-playing, rather than on using their skills.

What comes after version 1.5? I don’t know. Many people have suggested porting Skybreak! from ADRIFT to a system that would allow for a clickable interface. This is possible, but rest assured I’ll continue to update the ADRIFT version contemporaneously with whatever other version exists.

It’s very likely version 1.5 will be the last update that is “the biggest one yet”, simply because so many other things demand my creative talents, but it is still my intention to continually update Skybreak! indefinitely.

What an enjoyable game. Thank you for sharing.