Serania - Path of the Scion, a choice-based interactive fiction game with RPG elements, is out now on iOS and Android

I’m happy to announce that my game Serania - Path of the Scion is out now on iOS and Android.

It is a choice-based interactive fiction game with RPG elements like combat, character stats and free movement. Set in a Nordic culture inspired medieval fantasy world, you play as a villager, who is suddenly being hunted by the king’s Blackblade soldiers for some reason. You must escape and explore the realm to find allies and clues about your ancestry to solve the mystery.

I am using a progressive flow of the text, and the writing has been adapted to this. So far it has been working well for both fast readers, dyslexic readers, blind readers and impatient readers like myself. I hope you will like this design.

With its 70.000 words it is not the biggest interactive fiction game, still it will give you an entertaining story with many paths, and it will introduce you to a fantasy world that I’m planning to use for more stories. It is a world without traditional creatures like trolls, elves, and orcs. Instead some strange creatures are lurking in the shadows, and magic is only a secret thing that is yet to find its true place.

Serania - Path of the Scion is available on the iOS App Store and on Android Google Play. First part of the story is free to play. Unlocking the full story is $3.99. 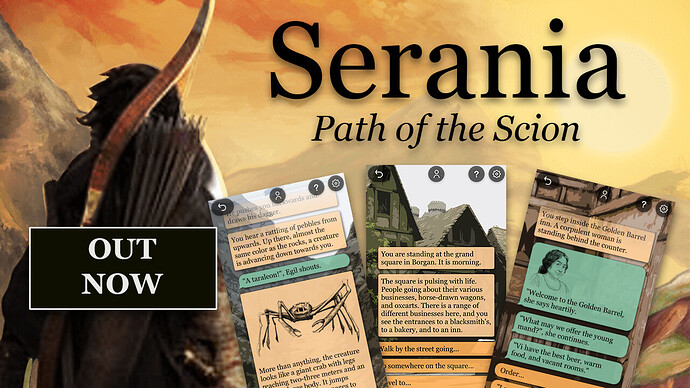 Would you like to see more games like this? I’ll appreciate any feedback on the game and its design.