Sense of Harmony Reflections and History

This post reflects on my feedback, what I want to improve, how I came to make this, and where I want to go.

Pretty much every review or piece of feedback about my game was identical:

Which I think speaks well to my skill of good character writing, and my weakness of plot structuring. 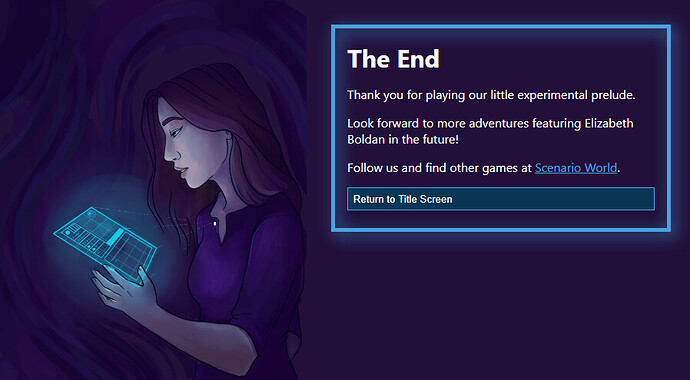 I actually didn’t really want this to be a demo. I’ll give some insight into how I came to make this game in a bit, but first just my intentions. I wanted to make an “eve in the life” story that introduced the character and the world, but also worked as a little story on its own.

Clearly that didn’t really work. And it’s not really that strange why: nothing ever closes. You’re forced to make a difficult decision with a client at the start, you learn that there’s something strange going on with a coworker in the middle, and you get freaked out by a strange encounter at the end. None of these things build off or really connect to each other, and none of them see any resolution. The client doesn’t come back, you don’t help the coworker, and you have no idea who the strange person you meet at the end is.

This game, or this world/character I should say, was not actually originally intended as interactive fiction. Originally I was working on a prototype in Unreal that was built as a detective game featuring the protagonist in her 30s and working as a private investigator. All the stuff about sex work was a part of her backstory that informed a lot of her viewpoints and how she interacted with people, but wasn’t really a part of the plot. Also, the idea of her being hypersensitive to other people’s needs or desires was not really present. She had cybernetically enhanced senses, but they were predominately for utility.

Anyway, it became clear the prototype was a bit too big for me, and I was having a lot of trouble designing the mechanics (I have predominately done story mechanics design, not like game-game mechanics design). Then, as May of 2020 rolled around, the Toronto Game Jam arrived and my partner asked if I wanted to try and make a text game with him that maybe could be a little prequel, just for fun. It seemed like a good way to clear my head, so I agreed and started drafting up character documents for an Elizabeth in her 20s.

As someone who is currently 28 and not sure what the fuck I’m doing in life, I designed 30s Elizabeth around the hope I would not always feel that way. She has her own issues: a bit too much of a loner for her own tastes, and maybe a little listless, but mostly without insecurity and firmly confident in who she is and what she’s doing. She’s a professional and she acts like one, and she knows how to set boundaries.

So, throw all that out for 20s Elizabeth. Twenty-two year old Elizabeth is still in university and hasn’t accepted yet that she doesn’t give a shit about her major, and is actually finding more value in some of the sex work she’s involved in than studying computer science, but she has no idea what to do with that thought. I came up with the cybernetic popup system as a text alternative to ideas I was exploring in the Unreal prototype. Basically I wanted to make you feel like you knew more than anyone else because of your implants.

Originally, we were actually building it as a little terminal game that would play in your command prompt. I pushed us pretty quickly to move to web however because it’d be a lot easier to play and we wouldn’t have to worry about all the cross-platform issues.

While a lot of this was happening, I was doing some volunteering for the tenant’s union in my city and my girlfriend was doing her Masters to become a therapist. Between those two things, I started to realize just how difficult it is to protect yourself when you’re helping people in need. I had to say no to tenant’s who desperately needed help but needed things from me I couldn’t give without fucking myself up quite a bit, and I had to see what happened when fights were lost and people lost either home or dignity.

That’s when I realized knowing what other people feel can be very difficult, and can really fuck you up if you don’t set healthy boundaries. I am not very good at it, so 20s Elizabeth shouldn’t be either.

When iterating on pitchs back when I was developing the Unreal prototype, I once wrote this:

Elizabeth Boldan has a rare gift: a cybernetic computer system interwoven throughout her nerves that gives her a second sight into people’s lives. Once, that gift helped her provide comfort in Toronto’s burgeoning brothel scene. Now, as a private detective, she puts together the fragments of people’s lives to help the lost, the vulnerable, and the failed heroes of a stalled out world.

And now I understood that providing comfort was a very tricky thing indeed.

So now the cybernetically enhanced senses are not really your friend. Yes, they give you insights no one else has, and more information about a scene is more power to control it, but maybe there’s stuff you don’t want to know. Maybe you don’t want to know how much it’ll hurt someone if you don’t help them, or how much they need something from you. Those pull strings that for an overworked Elizabeth are too taut already. Scenes that played on that successfully I think were the best parts of my little game.

Anyway, now that I’m on the other side of this, I’ve realized that I’m actually not ready to advance to 30s Elizabeth yet. 20s Elizabeth has a lot to teach me and maybe I have something to teach her.

So that’s what I’m going to be working on going forward. With what I’ve learned in hand, I’m outlining a full mystery for her to solve and, if all goes well with that, maybe even more. As I said, structuring is my weak point, and I have a bad habit of writing a lot to figure out wtf a story is even about. Hopefully soon I’ll be pinging people here for feedback. I’m also going to be pushing to target mobile, since that seems to be where a lot of the IF action is these days.

Anyway, is this a post-mortem? A reflection? A confession? Not sure. Probably should have outlined it first.

When I played SoH, I just KNEW in the back of my mind that this was originally made to be a detective game. One of my original notes was, “Elizabeth is basically a superpowered cyberpunk Sherlock Holmes, and I love it”, but I ended up not sending it because I didn’t want you to feel like I was pigeonholing the game or the character into a genre that you might not have even had in mind.

For what it’s worth, I didn’t see the fact that SoH felt like a “chapter one” to be a bad thing at all. Maybe this is my personal bias from being a creator whose work is explicitly meant to be a serial, but I don’t think there’s anything wrong with unanswered questions that are meant to be answered in later entries. Who wants to watch a TV show or a movie where all your questions are answered instantly? Sci-fi and crime, in particular, are genres that, for me anyway, always work best in the earlier stages of the story, when there are more questions than answers and you feel like the narrative is just a little too big for you to handle. The best writers of the genre are ones that can keep the magic going after that initial sense of wonder and mystery has worn off.

Contrarily, I had no idea there was an alternate version with an older Elizabeth – honestly that sounds fun, but this incarnation of the character and story seem more interesting to me. I’m not too surprised that the dynamics around boundaries and balancing others’ needs with your own are based on lived experience, though, since those were some of the freshest and most well-observed parts of the game (though I thought the rest of it was great too!)

I also have to say, when I read your sentence about how you wanted this episode to work as a story on its own, I immediately thought to myself “oh, but it doesn’t really,” and then had the same analysis of the narrative structure as you provide in the next paragraph. So while you may think of creating plot structure as a strength, I think you’re actually pretty good at analyzing it, which is definitely a critical building block!

Anyway, congrats again on the game – it was a highlight of the Comp for me, and I think for many others as well.

Maybe you don’t want to know how much it’ll hurt someone if you don’t help them, or how much they need something from you. Those pull strings that for an overworked Elizabeth are too taut already. Scenes that played on that successfully I think were the best parts of my little game.

I feel that. The game is an emotional rollercoaster from beginning to end. But, for me, the moments that stand out most of all are just as you say - when Elizabeth suffers from her own empathy.

I think a big part of what makes this theme so powerful is that it can be read from (at least) two compelling angles. A person can get into the character’s head and appreciate the struggle she’s going through (and, by extension, the struggles of those with whom she empathizes). But these moments can also put the reader into sharp relief, serving as a poignant reminder that we don’t have transhuman superpowers, and that there have probably been innumerable people in our lives whose struggles we neither understood nor cared about.

Thanks for the write-up. I’m eagerly awaiting the next installment!