Seaside, a free text-adventure in a new web engine

Hey, all! I just released my first text adventure, written in a custom engine called enlace-if. It runs in your browser and works on mobile devices that run JavaScript. It features fuzzy command matching, so typos are usually accepted. You can play it free here: 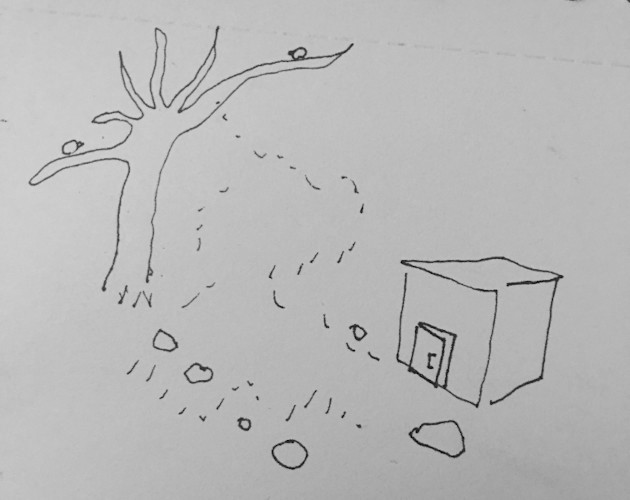 It’s designed to be playable with screen-readers, and has been tested with ChromeVox, NVDA, and JAWS. There are a few keyboard shortcuts to make sightless play a little easier: alt+c (focus command box), alt+x (focus first of latest outputs), and tab and shift+tab to navigate the page.

I plan to make the engine open-source and also make a visual editor for the creation of new text adventures without any programming requirement. It’s technically already possible to make new games with it, but the author would have to edit JSON files by hand (or in an unrelated editor). Let me know if there’s any interest in that and I’ll work on the editor sooner than later.

Thanks for looking! Hope someone here enjoys it.

I think I may be slightly stuck:

I’ve given the merperson comfort, security, and wisdom and am not sure what to do next.

The typo tolerance is nice and sometimes I was impressed at what got recognized:

Command: put the chalk on my hands.

You reach in the bag, grab a pinch of chalk, and rub it over your hands.

But sometimes it bothered me that the parser pretended to understand a command that it hadn’t really. For instance, that if you try to look at something that isn’t implemented, it just redirects to a look at the location. And this:

You take the climbing shoes and put them in your pack.

There was a similar moment where

“take everything from the shrine” was interpreted as “take the shrine.”

Also it might be nice to have more detail in “command not recognized”–is it the verb or the noun that’s the problem?

I would like to suggest “examine” and “x” as a synonym for “look.”

I think I may be slightly stuck

You’ve gotten pretty far! At this point it’s possible to get 2 of the 3 endings. The third will require another item to be placed on the altar, but it’s also by far a very optional ending.

I’m glad the typo tolerance is working out, and yeah, sometimes unrecognized commands get parsed as different commands. I’m just passing that as part of the engine for now. Good idea about having more detailed “command not recognized” output. Also, I suppose it’s time I implement “get all.”

It varies. First it looks for options, then base commands (such as look, get, inventory, etc). Then it looks for exits, and finally for unique command aliases (verbs), which do in turn look for item names. But if there’s no noun in the command, it just does the command for the first item it finds (with that command). edit: but, it loops through the words in the command text and looks for verbs and nouns in any order.

@dfabulich
Good call. I’ll add that next update. Suppose I should have played a few more text adventures before calling it done.

Been far too long.

Another feature that has been requested is “look self,” and I’m not sure exactly how far I want to go with that. Would ideally require adding support for conditional text block generation.

Ah, I reached the third ending. Not sure how to get to the other two!

I wasn’t sure that I could take the seed from my mouth while underwater. But the merperson’s plant-generating powers were well hinted.

I have to say that I found the very last sentence of this ending a bit out of tone with the rest of the game in general. But overall I did find the game engaging!

Interesting about the way you’re doing it–it’s good that there is an underlying verb-noun structure rather than just block commands. One of the things that was giving me doubts was some of the “command not understood” things:

“touch merperson” got “command not understood” even though “touch” and “merperson” could be understood separately.

That might be another case–there’s verb not understood, noun not understood, and verb and noun don’t go together with that particular action (which might call for a generic message for that verb).

I have to say that I found the very last sentence of this ending a bit out of tone with the rest of the game in general.

Haha, you’re right. I originally made the game as a birthday gift for a friend who just went through a rough breakup, so that’s where that line comes from.

I hope you find the other two endings! Some hints, if you want: For the first ending, try looking at the pillow. For the second, consider what might come before the third ending, or as a friendly alternative.

As for the command that didn’t work, I really should add that. It’s only fair, given what happens in the room description.

Thanks for playing and all the suggestions. So far I’ve made it so “take shoes and chalk” will work (but haven’t updated the live game yet), going to add “take everything” or “take all” when I have more time and push an update. Also added “x” and “examine” to the look aliases, as that only took a second. But haven’t updated the game online yet with that, either… Coming Soon™.

All right, all those features are added. You can see a list of them here:

After some feedback from early players, I've updated the game. New features: Commands like "take shoes and chalk" will now work for taking multiple items. Special commands "get all" or "get everything

Thanks a bunch for this early feedback. I really appreciate it, and it helps make this engine better for future projects.