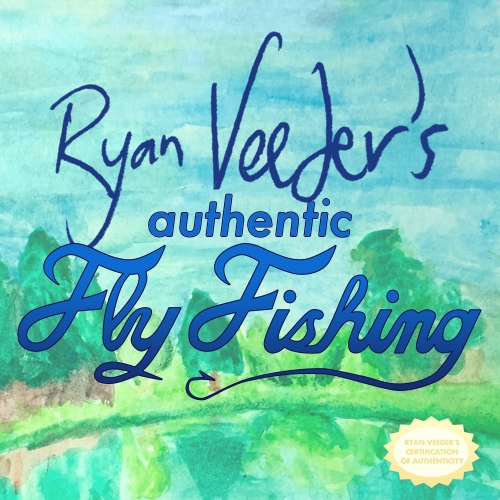 It’s an experimental text adventure in many ways: It doesn’t have an ending, for one thing. Plus it autosaves your progression! It’s experimental in some other ways too… 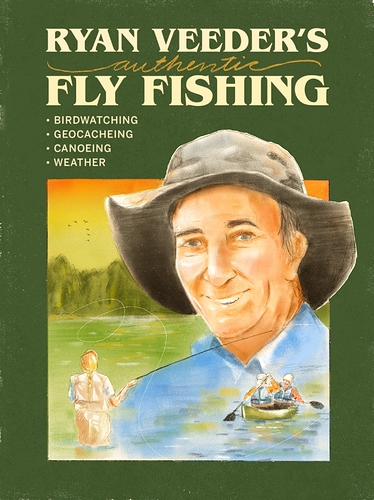 All those features—birdwatching, geocaching (or geocacheing, I’m not particular), canoeing, and weather—are things you can look forward to in Ryan Veeder’s Authentic Fly Fishing. Check it out, why don’t you, and let me know what you think!

Hello Ryan, thanks for the release!

Is there a way to download this so I can play on my machine?

edit: “Ryan Veeder’s Authentic Fly Fishing is designed to be played in short sessions over the course of multiple days.” Intriguing, let’s see if the moose is gone by tomorrow!

This makes me wonder if he’s doing something interesting on the back-end such as “stocking” the lake?

Yeah so I love this. I have already interacted with it in the recommended fashion by wandering around in the rain, naming a cat, looking at some dirt. Then closing my browser. I unironically look forward to revisiting and doing more of this sort of thing.

…and I kind of regret that description because fishing is the least of it. But people like fishing in video games for some reason so I hope it draws people in anyway.

I’m enjoying this as well. Unfortunately I decided to see what would happen if I wandered off the path into the woods and got thoroughly lost.

Ah, I see it restarts in the cabin every day. That’s good. Anyway, I’m still having no luck with the actual fishing, and I suspect that I need to find some bait or at least a shovel to dig for worms. In the meantime, there’s plenty of birdwatching to do. (And the place where the birdwatching guide can be found is… interestingly chosen.)

Honestly, this sort of thing is exactly what I want from a text adventure. I wish there were more games like this.

Wasn’t sure what to think from the description, but it’s pretty fun so far!

I’m still having no luck with the actual fishing, and I suspect that…

Found some sticks in the ground that look suspiciously like they’re for worm grunting, but haven’t figured out how to interact with them.

If you get lost again, you can zip back to your cabin with RESTART (or by reloading the page).

Here’s something neat: It was raining at Jewel Pond on Saturday, and David Welbourn told me on Twitter that he hoped he’d find a hat somewhere. So I put a hat in the game! And everybody’s save data is working fine even after I updated the game!

This feature would probably be far too much of a headache to implement, but would it be possible to have either some kind of login, or a way to download/upload saves, so the same game can be played on different devices?

Should be able to dump it from console with JSON.stringify(localStorage), copy and email to yourself or something, then import on another console with something like:

Clunky, but at least you’ll have a backup that way!

Found the hat, and a shovel and a place to dig, but I think it needs to rain before I can dig!

Going north from inside the gazebo yielded:

Is this a bug? Or am I just not understanding the layout of the gazebo area?

That is a real screwy bug! I’ll look into it. Thanks!

UPDATE: The gazebo thing has been resolved. Also a lot of other little things have been fixed. But I’ve noticed that often I have to force my browser to re-cache the updated game, so look out for that!

Ryan, I hope you’re planning on writing up some article or blog post about the general mechanics and design principles of Ryan Veeder’s Authentic Fly Fishing. I’d like to see your “experimental” work be a model so other authors can craft their own visitable casual storyworlds. I, for one, have always wanted to craft a science-fiction universe loosely based on the Cosmic Encounter board game and allow the players to explore the worlds as they please towards different contradictory goals.

That’s an excellent idea! I decided to start out with the basics (autosaving a tiny linear game) with a blog post HERE, and I’ll try to do a followup with fancier mechanics later—although I’m sure one can extrapolate those fancier mechanics from the base case…

Thank you! This is exactly the sort of info I wanted to see spelled out. I also look forward to your subsequent posts, time and will permitting.

Well, I reached the introductory message that says:

I feel like I have to note the fact here (that should suffice, since the author is in this thread). I don’t feel comfortable defying such strict orders.

As for the game itself, I’m still having fun, mainly because I know there’s something I need to find in order to make further progress, and I’m confident it’ll turn up eventually if I look under the right rock. I did find some very interesting reading material, which also serves as a clever way to keep the player coming back day after day.

Here’s the followup to the Basic Autosaving blog post. I plan to do one more post on autosaving techniques; let me know if you have any questions I should answer in it.

I find this game incredibly fascinating and I’ve made a thread (with lots of spoiler tags!) to discuss the plot and theories.

I’m totally obsessed with Authentic Fly Fishing - after discussing the game with others, I’ve come up with theories and questions. I’ve used spoiler tags but am trying to use clear titles so you only read something you want spoiled… The fenced off area This area belongs to Erica Nailer - but what’s her deal? I think she: Did something bad (recently):Shot and killed Tortus, Anita’s dog Knows some of the Fishers because she… used to belong to the Fly Fishing Club and is featured in the photo …