Title pretty much says it all, is there any way for me to release my Inform 7 game as an EXE so that I don’t have to distribute it as a ZIP?

Any help would be appreciated.

Well, there’s jzexe that will wrap a z1-5 or z8 file in a jzip interpreter, but generally, people who play IF are all about the portability of z/ulx files and the ability to play them on whatever they can squeeze an interpreter onto.

You could do this: ifwiki.

It’ a bitt grotty, and it may lead to conflicts if the user already has Gargoyle installed, but this is one way to do it.

Lectrote can be set up as a standalone game (package, not a single .exe). See instructions at github.com/erkyrath/lectrote . This is how Hadean Lands and Anchorhead are bundled on Steam.

I only wish there were a solution as easy as Fluid on Mac - I experimentally wrapped up the "release along with an interpreter’ website produced by Inform - zip-zap-zam - it turned into a standalone App easy as that just by pointing to some files. Unfortunately it’s not cross-platform and the developer expresses that he intends it only for personal use and not to create distributed applications.

Along similar lines, one of the users on the French IF Discord group, Natrium, had mentioned a couple weeks ago some success using Capacitor to get an Inform/Vorple game to play cross-platform (I think he had a test game running on Android). It looks like that platform is still in development, but promising (although the build process is a lot more complicated than Fluid).

With these technologies maturing, I’d say that it also takes pressure off the next generation of interpreters to reinvent the wheel by implementing formatting/presentation options since it can all be done in CSS.

As dhakajack wrote, here is a screenshot of Vorple running with Capacitor on my Android phone: 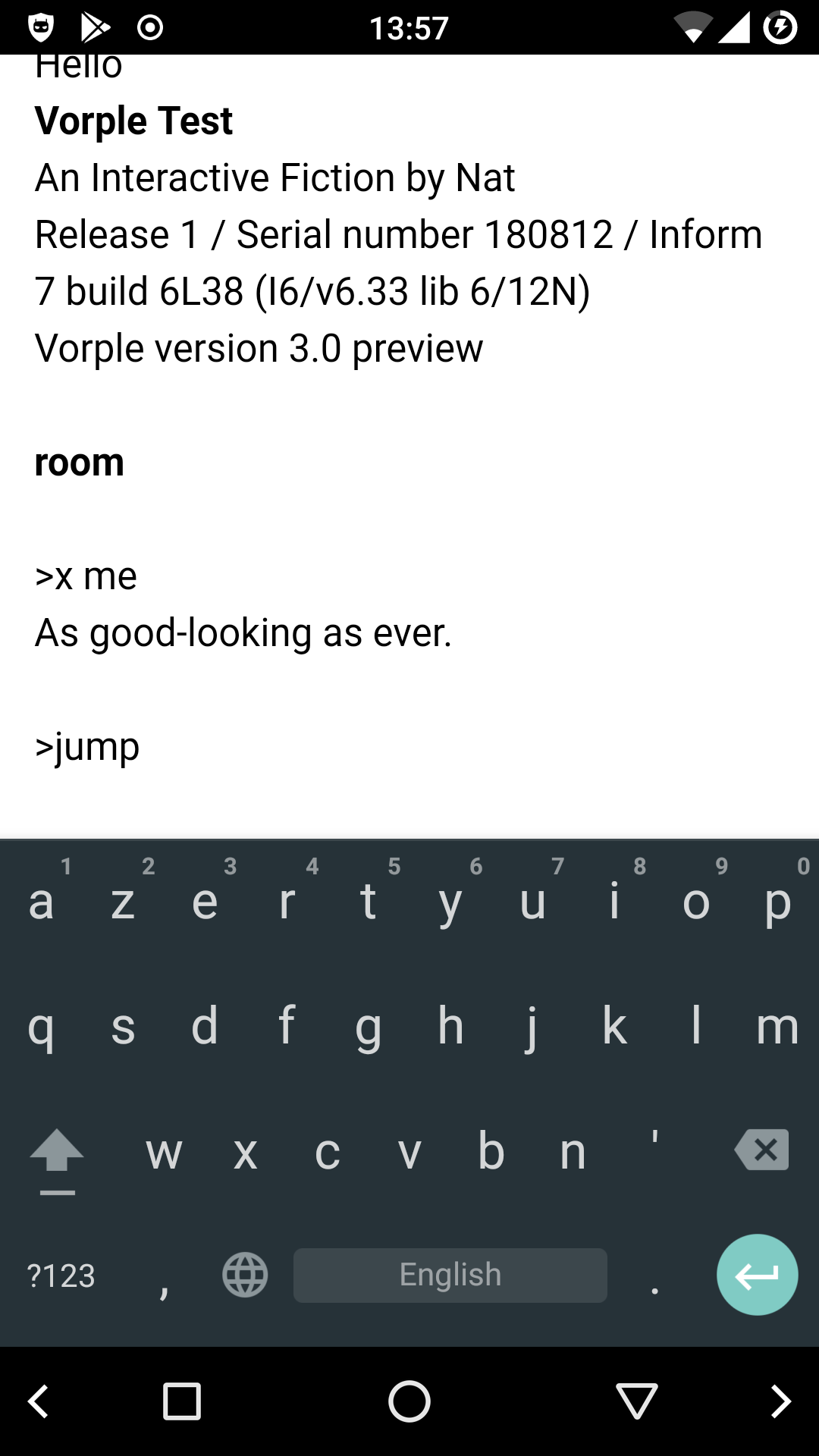 [/rant]
It was just a quick experiment, so I don’t have a template one could use, and maybe something won’t work as expected in the end. (And I couldn’t test on iOS because I don’t have a Mac.)

Technically, Capacitor can also generate an executable for Desktop via Electron, but I preferred writing a separate project for that. It’s available here. While still a work in progress, it’s functional so feel free to mess with it.

Keep in mind that these are not one-click solutions! Releasing for iOS and Android in particular is not fun.

And of course, all the above applies to Vorple. If you just have a “normal” game, then it may be better to just use Lectrote or iOS Glulxe.

I know this isn’t anything people can hold their breath for, but Graham Nelson hopes to address these needs in future versions of Inform. Here’s Emily’s blog that links to the info: