Quest For Lubok - The Journey To Creat My Dream Game

I haven’t tried it in QBASIC yet, but it does run OK in QB64 as stated by QuestForLubok (post #8 above on 29 Aug)
However, for something like this I do suggest he runs it through a spelling/grammar checker as I found it difficult to read/understand in parts. The port to Dialog also seems to carried all these errors across too.
I was fasicinated to see the programming behind this and can see the rationale for it. While it may seem daunting to look at, I imagine it would be quite easy to edit or add extras due to the way it has been organised.
I started out using BASIC (Exidy BASIC) on my first computer in 1979 and have moved through various versions of BASIC over the years. I even used VBA in EXCEL when I was working to automate data gathering and reporting. More recently, I have tried my hand at ADRIFT, QUEST, INFORM 6 & INFORM 7 although I am currently attempting to port a type-in game from ‘Computing Today’ magazine of Aug 1983 - written for the Sharp MZ 80K. I have ported it to Exidy Basic, CP/M MBASIC and Visual BASIC 5 but now the challenge is to port it to Just Basic .
I find all this is helpful in keeping my brain active in retirement.

Great info. Things to check out.

I have thought of using a robust micro controller for a modern day handheld. I have experimented with Microchip, Adafruit, Micropython, Arduino and RPi. To run a display, it is futile with less than 16 bit versions.

- My problem is my short attention span!

I am very interested in how it was ported to dialog. Is it manual or semi-automated ?

It is somewhat automated via regular expressions, e.g. for the directions, rooms, etc, but of course everything is checked, including room text, where things are occasionally fixed.

Doing this is also quite helpful, because we’ve discovered mapping and various object-related issues, which were also fixed in the QB version.

I’ve been spending my spare time outside of work and family. Since June, I’ve been working on this game. What have I learned? That writing one’s own engine within a dead programming language like Basic is something that I do find to be quite entertaining. The fun of creating a world of my own, to tell a story with such wonderful characters, and objects. The means of bringing forth a world of fantasy and exploration. It means the world to me, to be allowed to bring about such stories that need to be told. Making videos on my progress and writing blog posts about every little addition and step that I’m taking is something that I truly find to be an amazing thing. Of course, I know there are other authoring systems out them, but I love the concept of traditional conversational adventure games. Like the ones, you’d find on an old floppy disk. It’s a passion project, it’s a project of love. Here’s the link to download the open-source code to my game. Enjoy. GitHub - Quest-Master/QuestForLubok: Quest For Lubok, is a text adventure fantasy game. Set just on the outer reaches of our world. Written entirely in Qb64, this is my journey into creating my first game.

I spent a good portion of my life working on this game. I finished two separate portions of the game today and worked about on the Mage’s Circle. It’s something that I am truly excited about. I recently added in the cult of Seloria, which is truly a nice little twist in the story. There isn’t a passing day that I don’t feel proud of this game. Quest For Lubok, is one of the greatest games in my opinion. The thing about the game is that it has a heart. The game is made entirely by myself. I wrote the engine from scratch, I wrote the story, characters, objects, and items so far all by myself. I’m honestly on cloud nine right now. I am so buzzed with excitement that I posted two videos on it. https://www.youtube.com/channel/UCDWlroB7kG5sjvTtaSK390g/videos

In today’s (Update) video, I invite you all to join me on my tour of the Mages Hall. It’s a part of the game that is the perfect combination of fantasy and exploration. A world within the clouds and the discovery of ancient secrets to be told and sights to be seen. In this video, I discuss much of the joys of adding this place and a secret word. If you can find the secret word, I will give you a virtual high five. 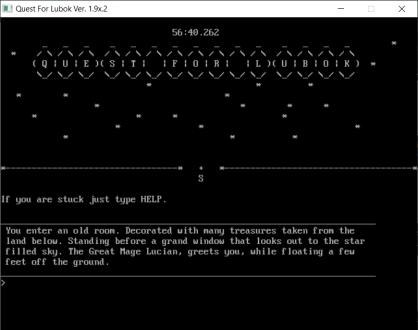 Join me, as I take you on a tour of a new portion of the game entitled “The Mages Hall”.